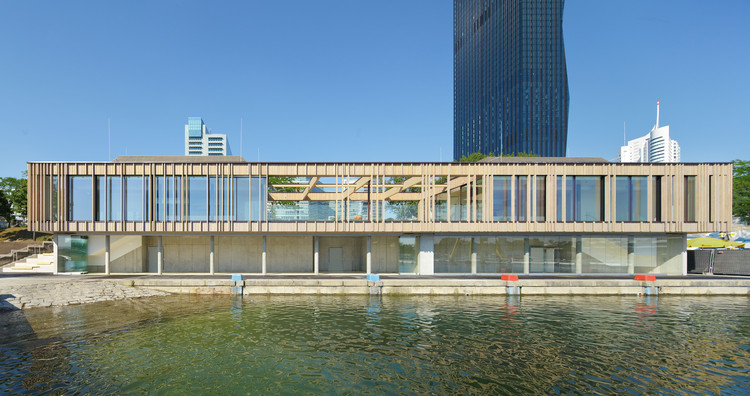 Text description provided by the architects. The so-called Copa Cagrana on the New Danube River near the Reichsbrücke at "Stromkilometer (river mile) 12.5", was getting on in years. Built in the early 1980s, numerous add-ons and conversions followed. Then the "WienerGewässerManagement" (WGM / ViennaWaterManagement) opted for a spacious new building, with which gerner°gerner plus and Vasko+Partner were commissoned. A design study for the overall concept of the Copa Cagrana preceded this realization.

To enable a sustainable redesign of the Copa Cagrana, which is also appropriate to the place and its character, the design considered the context of the existing surrounding. Distinctive and important points were emphasized and special focus was set on the waterfront as most significant feature of the site. Thus, the anticipated floodings have been integrated in the design concept.

The existing urban axis serves as a reference point and is directed to the river banks in order to create an urban unity both visually and atmospherically. To achieve this, the currently only rudimentary existing diagonal axis is clearly elabotated in order to directly link Donaucity and water. The resulting interface between the urban axis and the waterfront provides the stage for a new landmark for this area.

An energy-efficient wooden lightweight construction in combination with exposed concrete and a large glass façade that enable a panoramic view over the New Danube River, are responsible for the extra bit of South Seas flair, which visitors can enjoy. The ground floor level of the pavilion with it‘s terraces and direct access to the water serves as a shady, weather-protected space. The upper level is set up as a lightweight timber construction, designed for year-round operation . 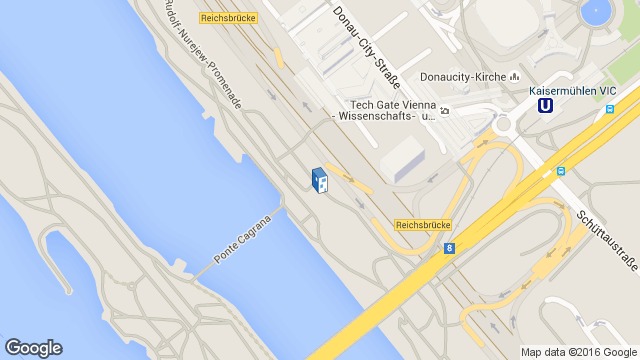