Standing tall in the expansive landscape of Western Russia, the monolithic Museum for Rural Labor is an architectural beacon for the Kaluga Oblast region. Built of local straw and clay, the eight meter tower is comprised of one round sunlit room adorned with the instruments of manual labor. Jarring, unexpected and mysterious, the museum was conceived by Russian architects Sergei Tchoban and Agniya Sterligova to pay homage to the region's deep agricultural history. Defined by a stark and unorthodox form, the tower disrupts the Russian landscape while simultaneously serving as a wayfinding device for residents from the nearby village of Zvizzhi.

Enter the rudimentary world of the Museum for Rural Labour after the break. 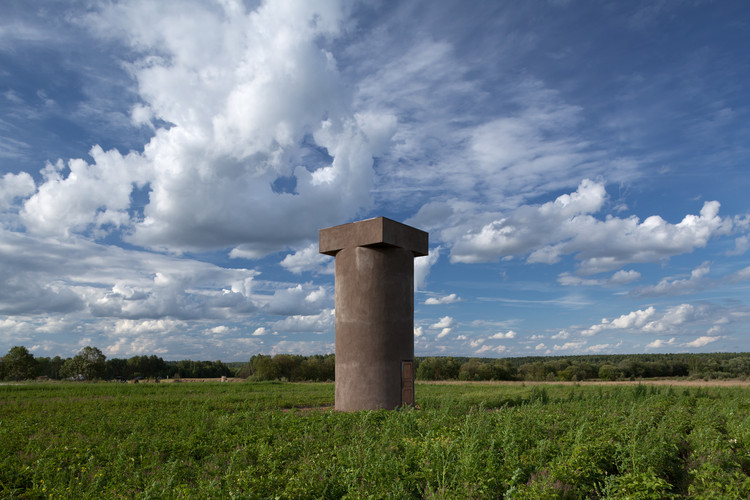 The team sought to recognize the laborers that have served as the catalyst for the regional economy for centuries, with a dual aim to enliven Kaluga Oblast's landscape. Formed of two rudimentary geometric blocks reminiscent of an abandoned silo, the tower is rooted in Russian architectural typologies. "By combining these emphatically simple, understated forms, the architects have recreated the pre-Petrine column, which is characteristic of traditional Russian architecture," state the designers.

Positioned at the edge of a potato field at the intersection of two rural roads, the Museum for Rural Labour embodies the humility of physically demanding work while providing a sense of empowerment to its community. Composed of native materials and illuminated by a round glass skylight, the tower inspires a profound connection to the land. "The tower seems to merge with its earth base and with its surroundings in general; you might easily think it has been here forever," say Tchoban and Sterligova. Through the juxtaposition of ancient building techniques with modern conceptual design, the team has created an inspiring paradox in a landscape of endless agriculture.

The imposing structure features a door placed to face away from the adjacent road, necessitating visitors to walk the circumference of the tower before entering. Once inside, visitors are immersed in the museum's permanent exhibition: a room clad in dozens of collected tools and artifacts from the region's agricultural history. Illuminated by a round yellow-tinted skylight, the tower basks in a constant glow that provides a sense of warmth to the soaring space. Always accessible through its unlocked door, the Museum for Rural Labor celebrates the ethos of a culture rooted in collective success through hard work.

The Museum for Rural Labour was featured in the 2015 Archstojanie land art festival in Russia. Find out more, here. 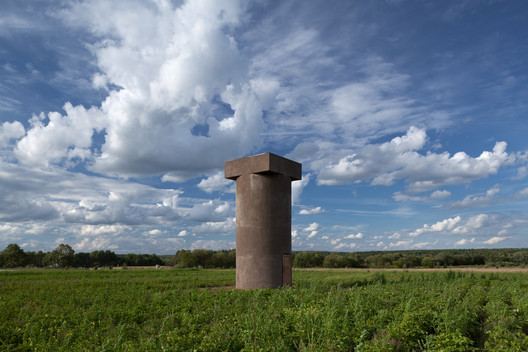