Like the famous buildings I first photographed, these residences were also products of the city’s rapid development and designed—at least initially—by outsider designers and architects. Often started as wood-frame workers’ cottages, the buildings were typically produced from designs in pattern books or other standardized development tools by German and Polish immigrants or the companies that employed them.

But they did not stay as designed for long. The combination of small residences, narrow but deep lots, growing families, and limited resources led to a distinctive expansion pattern: buildings that were enlarged through rear additions that incrementally reduce in scale. The result: houses that seemingly could be collapsed into themselves, like a telescope or spyglass. The old joke is that every time the family had another child, it would tack another room on the end of the house. When the extensions weren’t bedrooms, they were kitchens, workrooms, and even separate apartments.

Of course, telescope houses aren’t only located on Buffalo’s East Side, or even in Buffalo. Such houses are a building tradition dating back at least to the early 1800s, but they are so concentrated on the city’s East Side that they are the predominant building type on many blocks. The houses are so normalized in these neighborhoods that more than a few residents had to pause to reflect on the special character of their homes when I first asked what it’s like to live in a house with smaller and smaller rooms.

While Buffalo is undergoing a concentrated resurgence, the common maladies of Northeastern and Midwestern American cities, including deindustrialization, white flight, and limited social services, continue to linger on the East Side. The city was even recently shocked to hear that a major regional lender was being investigated by the State of New York for contemporary redlining activities that may have barred lending in East Side neighborhoods.

These problems are plainly visible in the built environment. Once-dense streets are full of derelict lots, and small fields now surreally flank many of the deep houses. The resulting wide-open views make the special design of Buffalo’s telescope houses visible, but they also reveal the tenuous condition of many of the buildings—and the neighborhoods as a whole. How they and their occupants will weather the city’s future is unclear.

Issue 4 of Satellite Magazine is out soon. Each issue dedicates a portion of the magazine for in-depth coverage of a specific North American city; in this instance, New York. To mark the launch of the issue, the magazine is hosting a launch party in Manhattan on Thursday, August 27th - find out more details here. 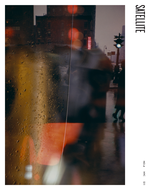