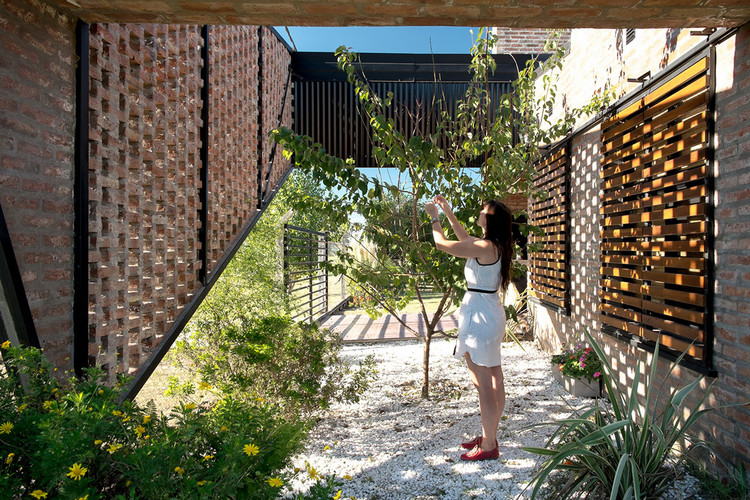 Text description provided by the architects. Quinta house is located in the city of Santa Fe, in the commune of Arroyo Leyes, 12 km from the capital of the province, on the provincial route No. 1, a route that links the towns bordering the river system, islands, creeks and streams of Paraná. This coastal condition defines the architecture.

To design the shadow

The first meeting with the client happened on site, and on its tour the desire was expressed for space in "contact with nature". They imagined: weekend out of town and arriving at an environment where the "green" predominates. This space is manifested in a large gallery, and became the component that articulates the project.

To the north there is a 4 x 20 meter gallery, interior exterior threshold, articulating different modes of appropriation and habitation.

The east is set as a connection between both gardens and party wall, avoiding views from the main space of the house.

The south as concrete gutter that collects rainwater and leads it to the courtyard to the west.

Quinta house was designed in an intense relationship of architecture and landscape, manifesting itself in a spatial sequence of gardens, which articulate the project, expressing the phyto-geographical features of the region. Gardens that were also identified in the action, becoming a pair as a landscape sub-unit; the contemplative garden of the senses, is made up of grasses and trees with vivid colors and a set of aromatic vines: brightly colored native flowers (field daisies, lavender and verbena), different textures (cortaderas, Penisetum rubra), the sound of ibirá pitá leaves or the pendulum movement of Ciná-Ciná. The playful garden materialized in a half shadow of Timbós; the containment garden of herbaceous associations together with damascus (Prunus armeniaca) and the screening of brick attenuate the impact of the western sun. Finallt, the ceibal instigates drinking mate at the edge of its shadow.

Brick as trademark of the territory. The tension between the stereotomic and the tectonic is defined in the relationship of form-matter. The metal structure of the brick wall leads efforts towards the earth, embodying the boundary between nature and artifice, framing the environment and enabling the expansion of the gaze. It also becomes furniture: benches and storage spaces complement the need for flexibility and versatility. 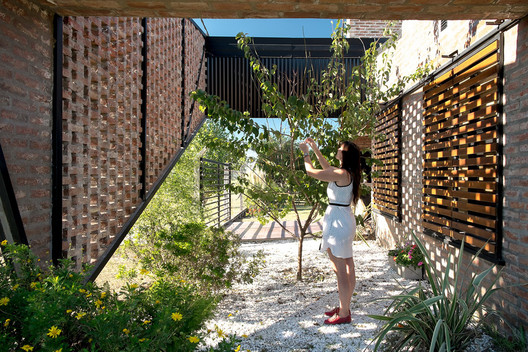