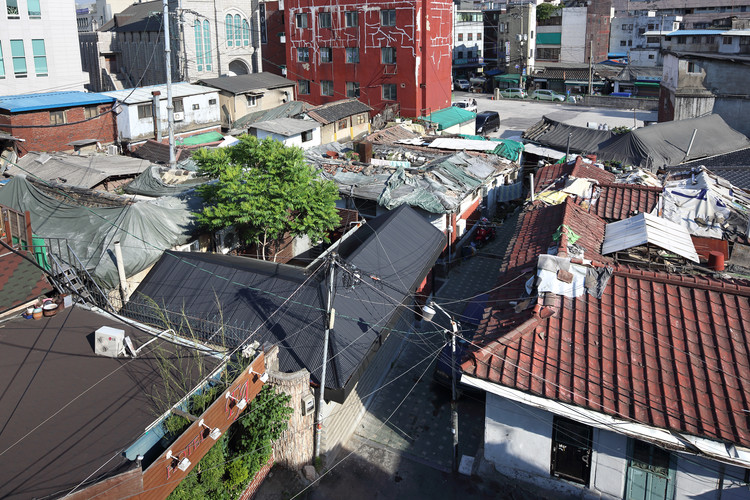 ‘Creative house’ which is second project after ‘Zero Place' project is the work turning a traditional Korean-style house keeping history of 80 years into studio and rental house. This project is ‘total design project’ which is not only architecture, interior design but also graphic design, web design, marketing, operating and management.

‘Creative house' is Korean-style house that built in 1937. Before this area is designated redevelopment area. client has spent  his whole childhood in here. The client who has old memories about old korean-style house came to Z_Lab to solve the problem the house was in a very serious situation because it had been remained vacant.

Compared to other areas where’s in seoul, ‘Changsin dong(district)’ is behind the times because development of this area is restricted. Deserted ‘korean-style house’ located in this area had many problems. Land value of Chansing dong(district) is very highly formed whereas there are no rent at vacant house but tax has conferred on it. Due to this area’s the poor housing condition and slumism, here is called as the cradle of dosshose. To make space renewal, Z_Lab set about reproducing project using smallest unit of space and tried to give life to this area.

Z_Lab think utilizing existing legacy has socially and economically better value than    build a whole new structure. But this 70-year-old space seemed like curious appearance. The roof of a house was collapsed, some part of pillars were floating in the air.

Z_lab decided to concentrate our attention on the design direction - 'attraction' of small room in an unconventional manner. Therefore they were able to keep its original form.

To make the space with no boundary, in the architectural interior and exterior space, yard deck and inner part are all reunited. Then we could make the only Creative house’s Charm Activities that took place only in no boundary area. Considering of  young generation who’s not familiar with traditional korean style, Open-air bath in front yard and camping facilities can make being well acquainted with korean-style house for young generation. They made the most of efficiency that’s storage and fixtures, to keep its original form.

Creative house meaning ‘A new inspirational house’ is used on weekdays to creator’s studio and on weekend it became unique rental house for foreigners and locals. Putting salt on this place’s tail as a creative base, ‘Creative house’ will keep local value as extending network and more seek evolvement to reserve local worth

You can be a owner of ‘Creative house’. ‘Creative house’ offer  a wide variety of people special experience in a period of ownership beyond the age of connection ‘Creative house’ project from Z_Lab connects future generation with past space legacy that might be thrown out. They rediscovered value of historical heritage and designed to make people remember this project as meaningful work.