Under the guidance of three teachers, four students from the Department of the Built Environment at Eindhoven University of Technology (TU/e) have designed and built a stage, “Ensuite,” for the 20th Extrema Outdoor, a music festival in Aquabest, Netherlands.

The structure is composed of 600 pallets, creating a stage that embraces visitors and provides an intimate environment within the crowded festival. By placing the DJ booth in the center of the structure, the stage is made tactile and experiential for visitors. 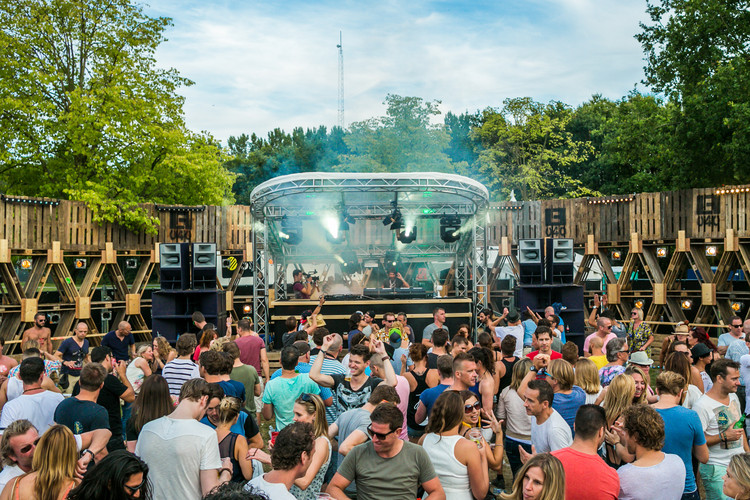 Ensuite is a semi-circle with a diameter of 20m and height of 4.5m, similar to an arena. There are three main layers. The first is a base of horizontal pallets, leveling irregularities in the ground. The second is a honeycomb structure made of triangles, framing views to the nearby lake. The third is a crown of vertical pallets, used for lighting and sound equipment. The project was built in six days and dismantled in two, requiring tools only as advanced as an automatic screwdriver.

Despite the stage being built only of wood connections, construction was made to resist fierce gusts of wind, clearing the safety requirements of a densely populated festival. For the most complex joint, the honeycomb structure where six pallets meet, a single, general-purpose connection was designed and applied to all main load-bearing nodes.