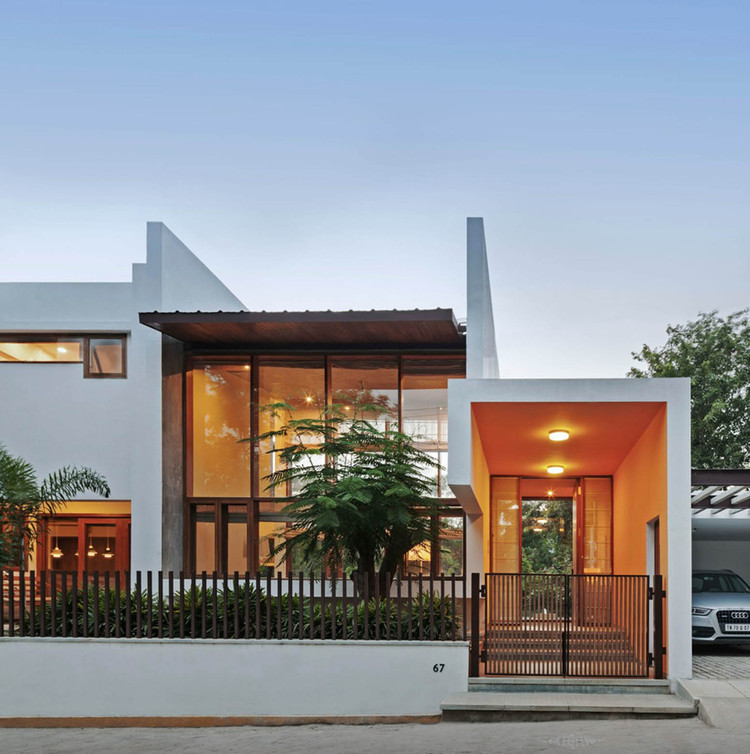 Text description provided by the architects. We intentionally thought of building an inward looking house for a young couple who wanted privacy from the street and views into their garden. The configuration of choice was a L-shaped plan that would straddle two sides of the corner site and allow openness into the garden.

Conceptually the house has two opposing faces, an introverted exterior facing the street in the east and south, and an extroverted interior elevation facing west and north. The street facing massing is more opaque while the garden facing elevations provide transparency and views.

Entry to the house is from the east through a rectilinear portal that frames a shallow water feature via a large picture window, thus establishing an immediate visual connection from the street to the garden. In the perpendicular direction the foyer opens up to a double height living room and then notches into an equally capacious dining area with an open kitchen. The family room on the upper level interacts with the double volume of the dining and living below.

The organization of the various functions of the home takes into account a deliberate segregation of public and private space. The ground floor houses a guest room, study, puja room and two kitchens other than the living and dining areas and the first floor has a master bedroom, child’s bedroom, yoga room and a family area.

The living room's verticality is emphasized by large floor-to-ceiling windows with sheer blinds that provide filtered light from the harsh afternoon western sun and open up to allow the morning sun from the east. The living areas open seamlessly to a wooden deck and garden.

Two sloping roofs articulate the importance of the living room and the master bedroom and simultaneously lunge out into views of the garden from either end of The "L-Plan " . A third roof over the yoga room slopes outward onto the street corner. These roofs have a curious detail as they are wedged within bold vertical fins and connected with a skylight-spacer on either end. The resultant effect makes them seemingly float within their respective volumes.

The surfaces of the facade are a mix of white stucco and polished cement juxtaposed with timber cladding on the underside of the roofs. Flooring are large swathes of polished Indian Grey Kota stone.

The furniture is peppered with mid - century classics such as Wegner Shell chairs, Jacobsen Swan chairs and a Saarinen Womb chair, juxtaposed with light fixtures by Louis Poulsen, Foscarini and Tom Dixon. Art on the walls are by young contemporary Indian Artists, while rugs are colorful woven flat weave durries from Jaipur. 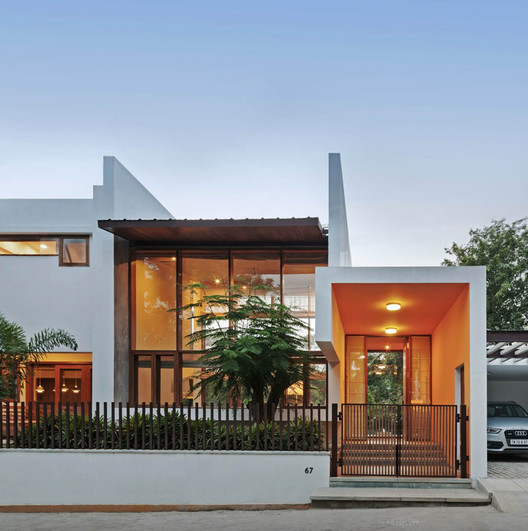