Marking the fourth anniversary of the terror attack in Norway that left 77 dead, today the island of Utøya has opened "The Clearing," a memorial designed by Norwegian firm 3RW to commemorate the 69 victims of the shooting massacre on the island.

The memorial comprises a steel ring inscribed with the names of the victims, suspended in a clearing in Utøya's forests. Around this ring, the ground is landscaped with slabs of slate, offering spaces to sit and contemplate the memorial, and to look out upon the landscape of Utøya.

According to the architects, the memorial was designed to be low precision, so that much of the work could be performed by volunteers - including the families of the victims - in a process known in Norwegian as a "Dugnad," which the architects believe "can be a vital part of the healing process for those affected by the incidents in 2011."

3RW's design was selected through a design competition late last year. Last year in March, another memorial design titled "Memory Wound" by Jonas Dahlberg won a competition to design the memorial for Utøya, however this proposal was put on hold shortly afterwards after objections from local residents and some of the families of victims. 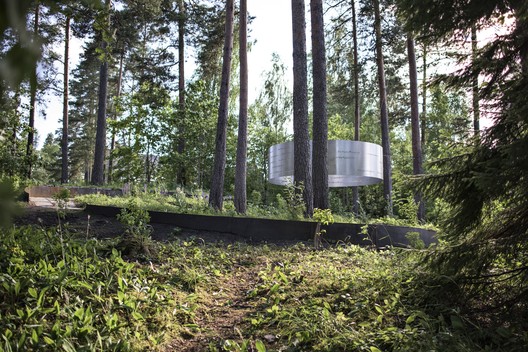