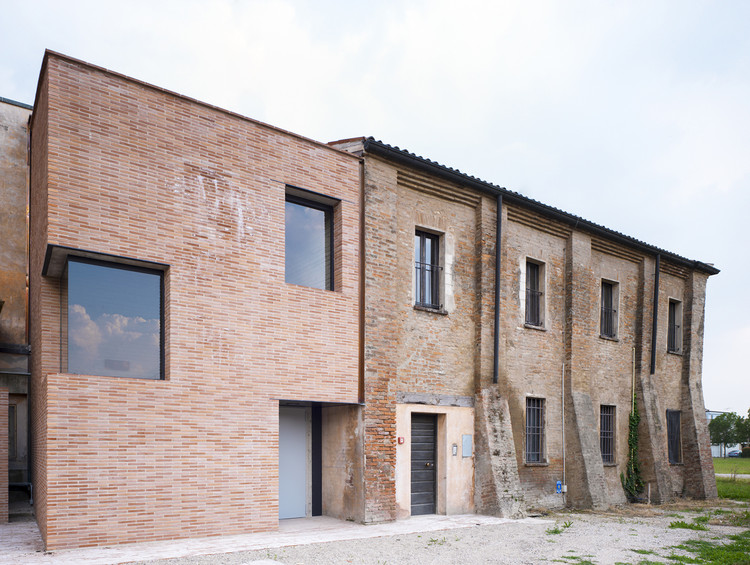 Text description provided by the architects. The redevelopment of the former convent of S. Maria in the small town of Gonzaga, near Mantua is a distinguishing example of sustainable urban regeneration aiming at enhancing functions and usability of public buildings. The realized project demonstrates the potentiality of architecture in creating accessible modern public spaces that are capable of re-aggregating of memory of place and community. The monastery of the late fifteenth century, already redeveloped as town library, through a new functional adaptation of some parts and a new addition to the north wing, configuring a modern front for the old building complex.

Some existing vaulted rooms, accessible from the cloister and used for exhibitions and activities by local associations, have been reorganized. Now, the space nearer to the main entrance is used for temporary events, while the far one hosts a permanent exhibition. A wooden ramp with integrated cabinet was designed to overcome the ground level difference between cloister and refurbished rooms, while providing an open shelf for books, magazines or pamphlets. The usability of all exhibition rooms is provided by plywood panels, coated with natural linoleum and placed on steel frames. These panels allow different configurations and room partitions as needed for exhibition purposes. The warm color tone of coating does not interfere with the exposed elements and enhances the quality of the vaulted spaces, marked by remains of ancient frescoes. The former janitor apartment in the north wing, no longer needed, has been fully modified, allowing to create new service rooms, toilets and other spaces for the library, both on the ground floor and on the upper (main) floor.

The feature, that defines the quality of intervention, is the staircase tower added to the north wing to replace a previous security steel staircase. The new building is a massive body that ends the rhythm of original facade, marked by four roughly equidistant buttresses. It characterizes itself differently through a free arrangement of the openings, that follow the landings of the new stairway, piercing the inner structure of exposed concrete and framing the exterior coating in terracotta tiles.

The staircase perimeter walls are made of concrete with high percentages of fine aggregates. On the inside, the walls are exposed showing traces of the formwork made of long wooden planks (400 cm length) and arranged with 15 cm offset. The window steel frames are lacked black. The staircase railings are made by vertical posts in raw iron stuck in the concrete slab. All floors are left in polished concrete. Outside, the building is completely coated with terracotta tiles (size: 25x6x3,5 cm) on the vertical walls and on the cover.

The staircase develops alongside an elevator shaft that guarantees full accessibility to the upper floor, where the public library is located. The staircase also outlines a potential new main entrance to the entire complex, aligning the emergency exit and a direct passage to the cloister on the ground floor. With the restoration of the former church apse remnants and the external arrangement pending, the revitalized open space in front of the north wing already acquires the character of a small pedestrian square. The space also allows a new access to the complex, and forms a filter towards a back green area as potential public garden for the neighborhood.

The square in front of the existing convent main entrance, whose facade shows here remains of former church aisle, is also integrated in the project by a redesign of parking lots and pedestrian space with a new brick pavement, a system of small squares is defined to serve the public complex, enhancing the reuse of an ancient building as a center for community life in Gonzaga. Altogether, despite a-delayed execution and a cut-off of some outside arrangement, which are waiting for a future realization, the redevelopment is a distinguishable example among similar interventions. (Text by Michele Stavagna) 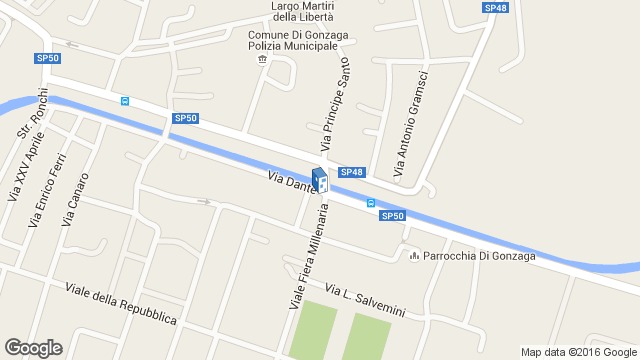 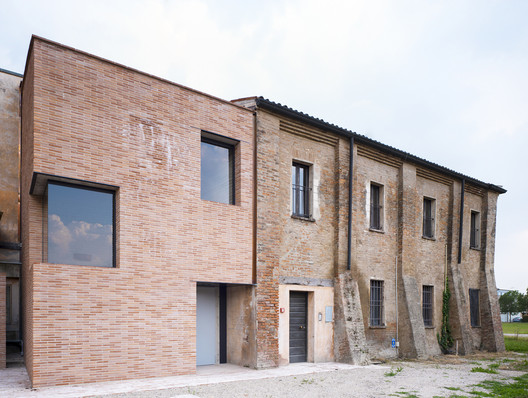