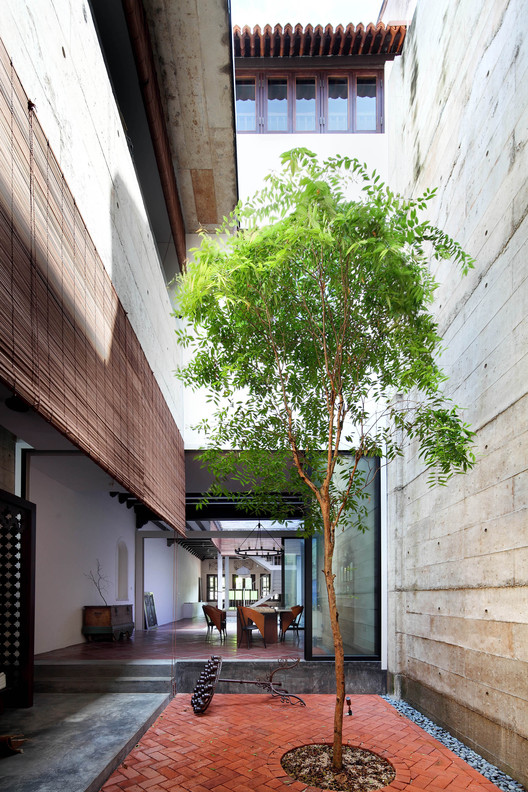 Text description provided by the architects. Located within a conservation district, this home celebrates the traditional charm of Peranakan shophouses with the addition of new spaces that are sensitive to the building’s rich heritage.

Akin to traditional shophouses, the spaces are interspersed with courtyards that serve as visual focal points. The original courtyard – with its preserved ornate fish mould centerpiece and accompanying water feature – forms the heart of the common areas while a newer courtyard marks the transition from the old structure into its new extension.

A young tree in the centre of this new courtyard adds a touch of nature to the urban ensemble. To the rear of the house are the kitchen and a retro spiral staircase that leads to the second floor master bedroom and rooftop terrace.

Many original elements were retained as well as restored, such as the timber flooring, doorframes, window shutters and iron gates. Clay bricks were also recycled and incorporated into a partition wall as salvaged glazed tiles were put to use in the bathrooms. Even the blue paint for the walls was restored to a more authentic tone by using mineral silicate, while a pigmented grouting mixture helped to recreate the five-foot way’s red cement flooring.

Interestingly, the forecourt’s boundary wall displays a similar progression from old to new, with its paint-stripped bricks revealing layers of the shophouse’s history. The bathroom floors were also given a terrazzo finish as a nod to the age-old craft that is fast dying out.

With its blending of old and new elements, this house not only preserves a unique cultural heritage, but also acts as a storytelling device that narrates the histories of its past and present occupants.