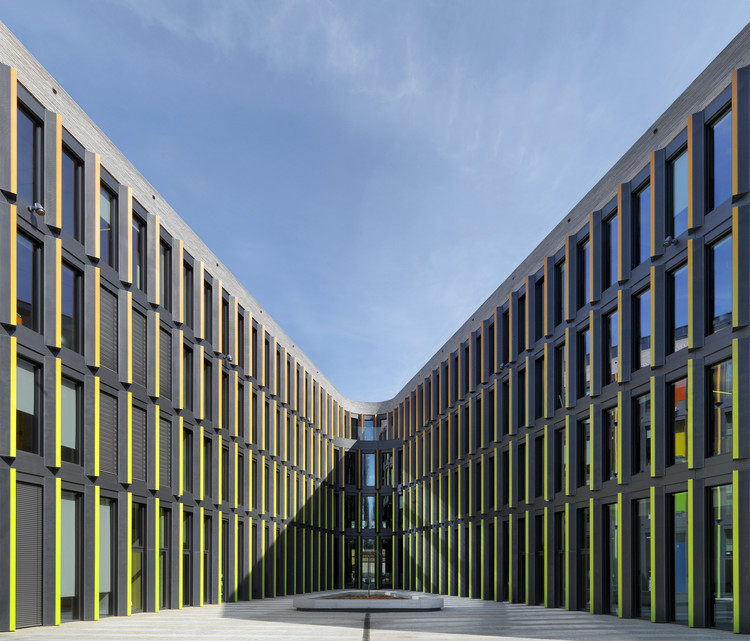 Text description provided by the architects. The history of the project dates back to December 2011 when Ericpol, one of Poland’s largest ICT companies, purchased a derelict plot in the centre of Lodz at the junction of Sienkiewicza street and Tymienieckiego street. It used to be the site of the Olimpia swimming pool, popular in communist times, which had fallen further and further into disrepair over recent decades.

The estate lies next door to the neo-Renaissance Scheibler Palace and incorporates a fragment of the former formal gardens of the palace which include five monuments of nature. The Regional Heritage Preservation Office has placed the entire area under its protection.

The relics of post-industrial architecture situated on the other side of Tymienieckiego Street, formerly forming part of the Ksiezy Mlyn (literally, ‘Priests’ Mill’) industrial and residential complex, were transformed into ART_Inkubator. Teeming with life, it consists of offices, art workshops, and multifunctional cultural space.

The main challenge presented by the project was the alignment of the functional requirements with the limitations imposed by the heritage preservation officer and the restrictive conditions imposed on the development. Resulting from the panoramic analyses conducted, the office building was given the form of a four-storey-high solid with two wings, linked in its central section by a glazed connecting section (housing the lobby with the lifts and the glazed conference rooms). This is the origin behind the building design based on a plan approximating the letter X whose form allowed the optimum use of the area and conformed to the functional programme commissioned by the investor. The architectural language applied in the project reinforced its clear relations with the environment. The green wedge of the park enters deeply into the building, limiting the intensity of development. The form applied provided for major flexibility in the arrangement of office space. The functional division was adjusted to the specific nature of the work of its future users and to the investor’s strict requirements concerning security and access control.

The brick and the façades

Designing the façades, the architects tried to make a connection to the context of the 19th-century industrial development of Lodz while at the same time losing nothing of the contemporary language of architecture.

Whole surfaces of the façades were clad with light-grey, hand-formed and traditionally fired brick coming from a Danish manufacturer, Petersen Tegl. This sophisticated structure, a result of meticulous arrangements agreed with the Lodz regional heritage preservation officer, gave the building a unique, mottled colour and provides a background for the colour accents in the façades. The contemporary glazed surfaces with vertical sunshades, whose character makes a link to the colour range recorded in Ericpol’s visual identification, repeat the rhythm of the façades of 19-century factory developments in Lodz.. The creative interpretations of local traditions expressed in contemporary form, makes the new architecture clear and legible in its environment.

One of the first analyses performed by Horizone Studio was testing the potential heights of individual floors in the context of limiting the building height to 16 metres. It turned out that the space available was approximately 1.5 m too short to allow the rooms to be of comfortable height (3 metres) and to allow the introduction of suspended ceilings behind which the air conditioning and mechanical ventilation systems could be installed. Therefore, in agreement with HVAC engineers, a decision was made to scrap the suspended ceilings together with a traditional air conditioning system. In return, the office spaces on floors from 1 to 3 received the so-called Thermally Activated Building Systems (TABS) slabs. In this system, the concrete slabs contain pipes that, when filled with ice water, cool down the concrete, which in turn chills the air thus lowering the temperature inside the rooms. To increase the efficiency of the TABS installation, the air coming from the mechanical ventilation is also pre-cooled. The system proved sufficient for 90% of the office space, and only the conference rooms and the high ground floor spaces were given a traditional form of air conditioning. The TABS system has another advantage: it ensures thermal comfort for the staff with no areas of concentrated cold air inflow, as the ceilings chill the entire space uniformly, although the significant inertia and the reaction time lag may be a drawback. That is why cooperation with Niras Polska on design work included development of the so-called neuronal model of the building. This is an additional algorithm included in the Building Management System which analyses the data received from sensors placed throughout the site and in a way makes the building ‘learn’ its behaviour with time. Additionally, the system has online connections to two independent metrological stations to read weather forecasts and adjust to them with appropriate advance notice.

A consequence of giving up suspended ceilings was the idea to use exposed architectural concrete for the ceilings. This gave the interiors an original, industrial character. The precise rhythm of the formwork boarding, based on the typical dimensions of the plywood boards, defines a rhythm that is repeated by the lamps suspended under the slabs and by elements of the acoustic panels. Although the TABS piping makes it possible to drill the slabs to a certain depth (defined as 10 cm for the project), it does, however, render any through drilling difficult. Thus all the perforations necessary for the assembly of lamps and installation of connecting cables had to be planned at the architectural and construction design stage. During construction, Strabag contracted to perform the actual works, surveyed the structure to define hundreds of such potential points at the stage of formwork to increase the precision of works.

Architectural concrete was also used to design the internal surfaces of the eastern and western walls, and those of the staircase wells. The contractor was obliged to first create large-scale mock-ups before the construction stage and select an appropriate concrete mix and technology, and only later to deliver onsite the required standard of the concrete elements.

Reducing the functional cost of the building

Most offices feature mixed mode ventilation which combines both natural and hybrid ventilation. To protect the rooms from overheating, external blinds and appropriate glass parameters were specified. The interior corridors are designed so that each could end in a large panel of glass, thus providing additional light and maintaining links with the environment. The partitions of the main conference halls are made of glass so as not to build excessive divisions within either of them. The sun path analysis conducted at the design stage made it possible to differentiate the glazing of the façades, depending on their exposure to direct sunlight. Southern, eastern, and western faces were provided with double glazing units built of highly selective glass with low-emission coating which protects against excessive heat surges in summer. In turn, the northern façade, vulnerable to greater heat losses in winter, received triple glazing units with low emission glass. Additionally, the glazed surfaces received external sun-stopping blinds controlled through the BMS system. Thanks to the perforations of the blinds, even when they are pulled down, the users inside the building can enjoy a view of the park landscape surrounding it. 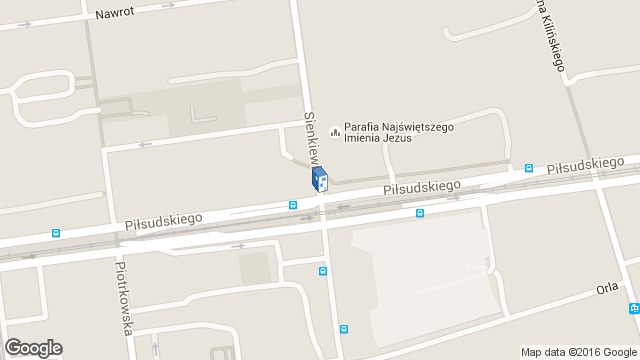