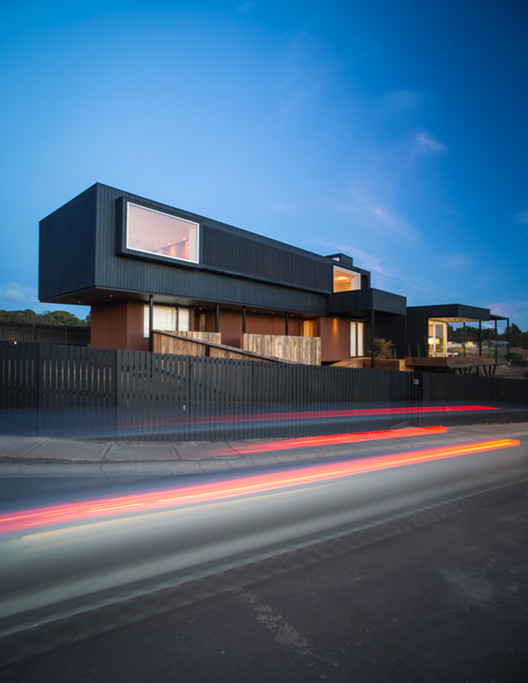 Text description provided by the architects. After designing a series of projects in the form of weekend houses, we developed a house with the same structural system designed as permanent residence. This allowed us to reduce construction times associated with a more complex program (bigger areas and more rooms). Part of the new requirement was to incorporate a small office with an independent access, as one of the owners wanted to work from home.

The commission arises once the owners make the decision to leave the city of Santiago to move to the coast, looking for a better quality of life, for this they settle in a quiet place that would allow them to be in a natural environment outside of the city but close enough to be able to commute, as the city of Concon would be the workplace of one of them and also where the future school of their children was be located.

Mantagua, a small neighborhood 8 km from Concón, was the place chosen for the house. The site is located on top of Mantaguas’ wetland and Ritoque’s dunes, both protected natural areas and great places for outdoor activities such as kayak, bird watching and hiking.

The home sits on an edge site of Mantagua; towards an area  of steep gorges that allows a significant distance from other constructions and to extend the views towards the sea and the landscape of dunes.

The site of the house along with the distribution of the living areas, allow the house’s social spaces to be at the edge of the site (at the beginning of the slope), where boldos and peumos (native species) demarcate the edge of a terrace oriented to the southwest. The house design is based in two volumes; the main one organizes almost all the enclosures. The second one is perpendicular to the main volume and it assembles living areas, dining room and terrace spaces that frame the views to the Pacific Ocean and to the dunes of Ritoque.

The siding of the house is dark. Black painted wood (second floor) and rusted steel (first floor) contrast with the interior rooms in soft colors.

This is a less formal permanent house in a privileged environment.