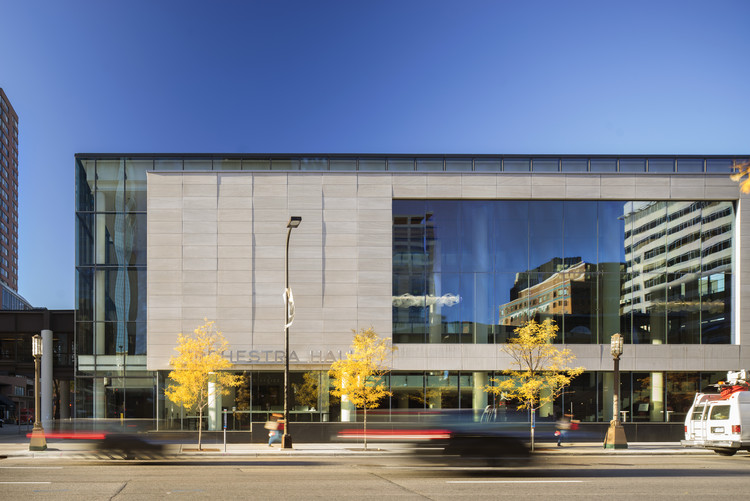 Text description provided by the architects. Since its opening in 1974, Orchestra Hall has played a vibrant role in the cultural and civic life of Minneapolis. The original design by Hardy Holzman Pfeiffer focused on the auditorium experience; the lobby spaces were considered temporary and were to be replaced after 15 years. But it was 39 years before the renovation and expansion project was undertaken, with primary focus on improving the experience for concert-goers and revitalizing the relationship of Orchestra Hall to the City of Minneapolis. A broader objective was to contribute to the transformation of the southern downtown district within the Twin Cities’ cultural community. Harmonizing Old and New.

A top priority of the project was to preserve the concert auditorium as the iconic element of the original 1974 design while re-envisioning lobby and amenity areas. The architecture of the additions, constructed of stone and glass, reasserts the presence of Orchestra Hall as the southern anchor of Nicollet Mall. It is designed to give new emphasis to the Hall within Peavey Plaza and to re-engage the Hall with its urban context. The design juxtaposes a light, transparent, rectangular “wrapper” against the Hall’s existing, distinctively angled, brick shoebox auditorium. On both the 11th Street and Peavey Plaza sides of the building, the expansion maintains the views to the red brick walls and the rounded corners of the auditorium, underscoring its prominence within the new ensemble.

The crisp contemporary open aesthetic of the new acts as a counterpoint to the original auditorium while acknowledging the legacy of Minneapolis’ modernist downtown buildings and public spaces, designed by some of the 20th century’s most prominent architects. The expansion introduces a contextual urban palette of exterior materials including Alabama Silver Shadow limestone panels with a honed finish for the upper levels, and Mesabi Black honed granite at the base. Urban Engagement The transparency of the new lobby architecture, with floor-to-ceiling glass walls, showcases the activity within, captures dramatic views of the Minneapolis skyline and infuses new energy into the neighborhood. The 11th Street drop-off has been shifted to the west, revitalizing the streetscape as a tree-lined avenue with a generously-scaled sidewalk that connects Marquette Avenue to Nicollet Mall, and Orchestra Hall to the urban fabric. The effect is to reinforce the international profile of Minneapolis as a walkable city and that of the Hall as an open and welcoming destination.

The new entrances to Orchestra Hall acknowledge Minneapolis’ growth over recent decades and corresponding changes in traffic patterns, which led to changes in the way the public approaches Orchestra Hall at both street and skyway levels. The new principal entrance on the west side, named the Nelson Entrance, is marked by a wide canopy that gives the Hall a bolder, more welcoming image on Nicollet Mall. A secondary street-level entrance on Marquette Avenue welcomes those arriving from the east, including those using public transit. Patrons arriving via the skyway, currently the Hall’s most popular entrance, have the choice of a new, conveniently located escalator to reach the main floor. Connecting with the City, Inside and Out.

The expansion of the lobby to the west culminates in a new glass and stone room, to be known as Target Atrium. This inviting multipurpose venue features a fireplace, large glass walls, sliding glass doors and an outdoor terrace, the Cargill Commons, bringing Orchestra Hall more prominently into Peavey Plaza. 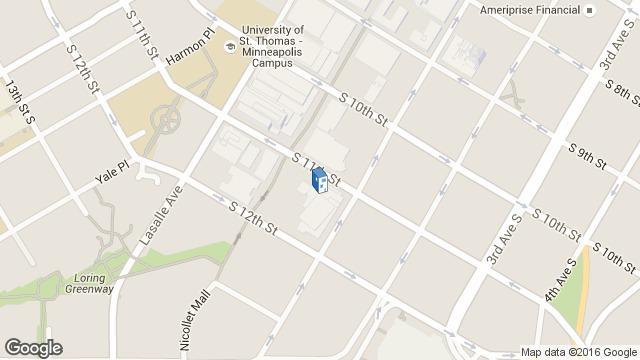 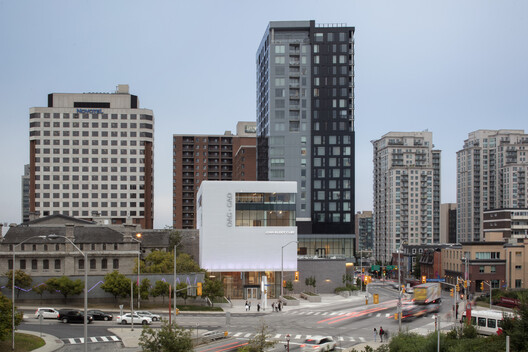