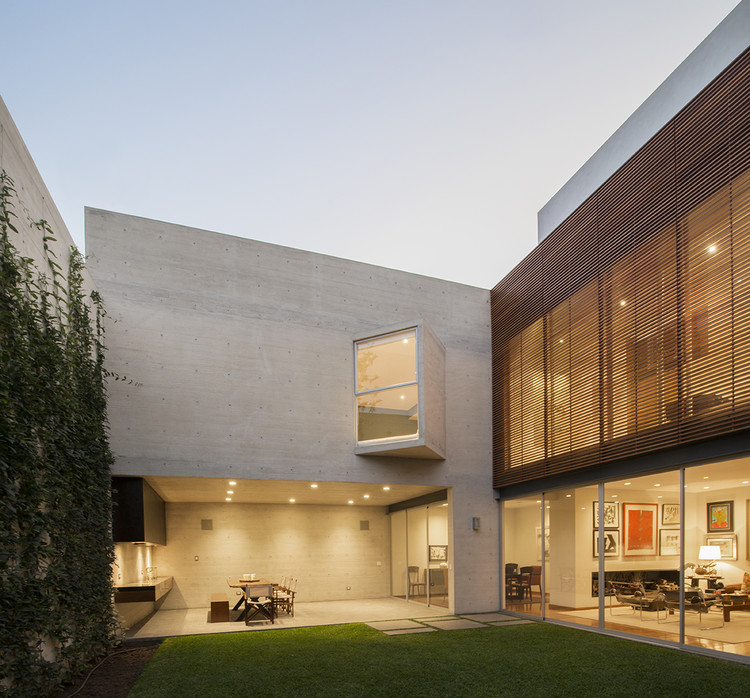 Text description provided by the architects. House V is located in a traditional residential urban area of Lima, with mainly single family homes and low rise buildings in a site with a northwest facade facing the afternoon sun.The project was conceived in a small plot wedge between two existing houses as a four story vertical building with a large program for a family with three children.

In order to gain more garden space privacy and a controlled view to the outside, the house was raised above street level generating a large underground garage, storage, and gym with a terrace connected to the house through two stairwells.

The first floor was design to hold the social spaces like living room, dining, bbq terrace and a small office around the garden while the kitchen looks into the street and underground terrace.The second and the third floor where generated to contain the private part of the house, dew the space restrains a practical reasons.

The second floor was developed as the bedroom area while the third floor was recessed from the main façade to allow more light to filter in and to reduce the scale of the house from the garden and generating a terrace space for the family room and the study. The service area was also placed in this level to allow proper lighting and ventilation.

Like most of our projects, the house was completely built in concrete and steel to express its structural characteristics and plasticity, allowing it to be molded to create spaces and capture light, defining the interior and exterior spaces while using a series of vertical and horizontal wood screens to control the access of light and the privacy of the spaces.