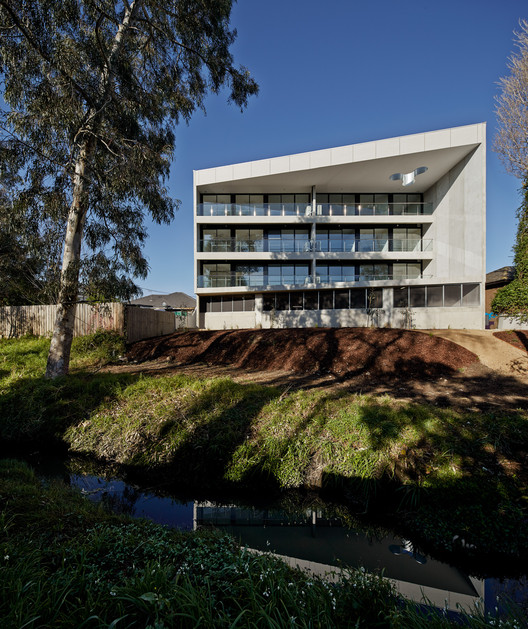 Text description provided by the architects. Located in Melbourne, Australia, Trinity Apartments is a 24 unit affordable housing project which is both modernist and egalitarian at heart. Designed to provide equal access to daylight across all of the units, the building incorporates a high level of social and sustainable design principles. The design philosophy includes full daylight access to the common internal areas which are typically dark and unconnected.

Trinity Apartments can be found on the border of three suburbs: Kingsville, West Footscray and Yarraville, within 8 kms of the city. It is at the crossroads of three major roads: Geelong Road, Somerville Road and Roberts Road and is made up of three equal levels of 8 apartments. The trinity logo is made up by joining the three 8s and realises three aspirations; sustainability, affordability and people centred design.

Trinity Apartments achieved a NatHERS sustainability star rating of 9.1 stars out of 10 with the average star rating across the full project of 7.3. This was achieved with passive solar design principles on a constrained site, including double glazing and high levels of insulation. The project incorporates a large common landscaped retreat area, secluded from the roads and facing Stoney Creek to the north.

The building design incorporates the trinity identity through the building’s fabric- creating a unique identity. The trinity concept is transposed graphically in three elements; a discreet cut out at the Geelong road entry point with the shadows cast by the large cut outs in the roof to the North and South elevations; and most notably in the custom designed precast concrete walls to the East and West. The logo was designed to reflect the trinity concept of the building’s place on the land, and used the figure to juxtapose the building’s modernist expression. The trinity emblem is both evident as a montage from a distance and as a single element experienced at human scale at Ground Level.

A further notion of ‘Trinity’ is expressed by linear cross planning. This rectilinear planning enables the apartment building form to be crafted and cut into 4 quadrants. The quadrants enabled connections to be folded through the planning of the block. Each apartment has access to natural daylight in every room as well as in the corridors. To promote social interaction, the foyer was designed to be double the width of a usual foyer which enables moments for connection and conversation. The internal passageways are short and connect all of the occupants with city views in the common areas. Further social interactive spaces include the rear social garden which is connected with Stoney Creek Reserve and is not fenced nor closed off. This enables the social space to be shared with the broader community and a greater connection with the residents outside the block.

A three storey void at the entry creates a dramatic entry point to the building and allows daylight to penetrate the common area of each level. This also affords a view line of the city for all occupants from the common internal spaces.

Throughout the building are energy efficient fittings, motion and light sensors and high performing appliances. Selection of finishes and building materials were made to lower the environmental cost of both embodied energy in the project and the energy output estimated over the life of the building.

Located so close to the city, the site represented an opportunity to develop Trinity Apartments in a prominent location. West Footscray is an area undergoing a transformation driven by both private and public investment in infrastructure and land development.

The project was designed and delivered to conform to the innovative NRAS (National Rental Assistance Scheme) which is a public policy initiative designed to support low cost housing via the use of private investment. Trinity Apartments resident Thuy has been living in the building for six months with her daughter Madelyn. She said she has no intention of moving from the building anytime soon. 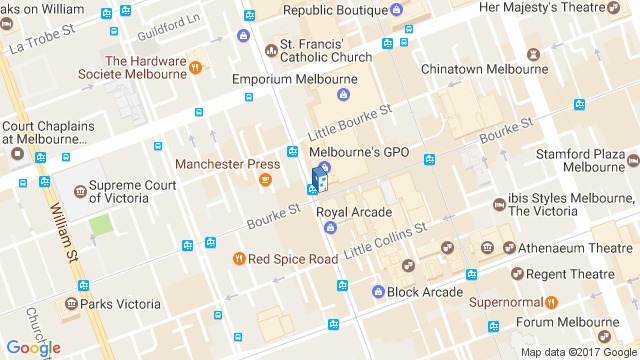