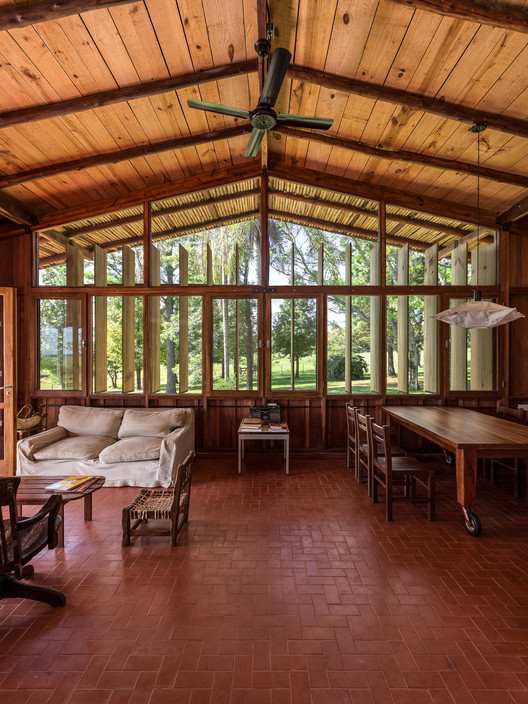 Text description provided by the architects. The intervention takes place in a southern field of ​​the province of Misiones in northeastern of Argentina and involves the expansion of a house and re- functionalization of a small adjacent barn.

In this part of the province you can see the gradual topographic change of the plains from Corrientes to the start of the Misiones sierras. The landscape has been transformed in recent years with increasing deforestation that incorporates short planes to the distant view of the mountains. These visuals are complemented by air of forest and livestock production that characterizes the area. The climate is characterized by heavy rainfall and humid heat throughout the year, winter is short but severe frosts.

The first decision was to incorporate galleries in both buildings (house + barn), because the great need of shadows. As the house needed a complete change of the roof, galleries are part of the same deck. In the barn, as there was no need to change the ceiling, the gallery genre as a volume with the same slope of 15 percent.

Facing the galleries with the same characteristics a dialogue between them, where the mere separation becomes a containing space is generated.

As the expansion of the housing should be closed for safety and climate reasons, but tried to keep that same exterior character of a gallery, wood was used in both openings and walls, with the intention that contrasts with the rest of the home, giving temporary character, typical of open buildings. The construction follows the local tradition, very characteristic inside Misiones, tables placed vertically with lids of the same material.

The wooden walls are composed of a double envelope, the outer is pine, without further treatment and the structure and the inner shell is eucalyptus. Between both sides a vapor barrier and glass wool was placed, giving comfort to the house.

The shutters fulfill the dual function of providing security and filter out excessive light of the region. Besides generating gaps, enable a changing relationship between the inside and the outside, adapting to the needs generated by the climate of this region offering shade from the hot sun.