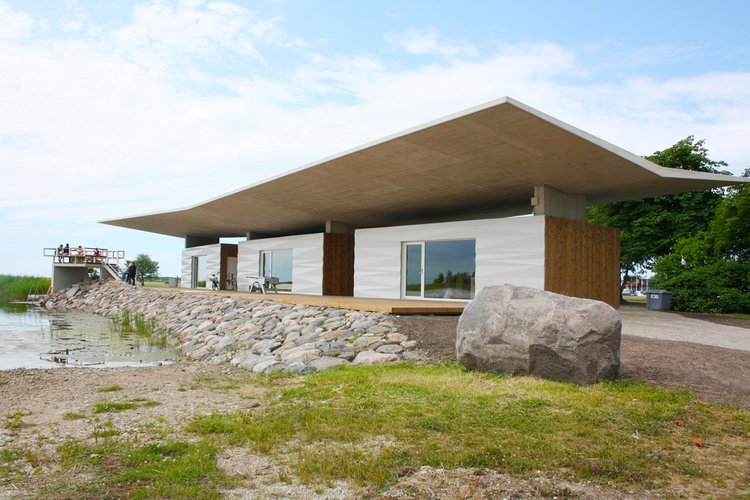 Text description provided by the architects. This is the fourth beach house in the last 170 years of Kuressaare resort. The building situated between the gulf and one of the best remained fortresses in the region – Kuressaare Castle demanded architectural solution that keeps clear the views to the surrounding. Choosing the method of construction concrete was the best way to give the building its postcard like memorable shape, durability and resistance to stormy autumn weather. There are three functional units of space under the concrete roof accommodating life guard, youth activity center and a beach bar as well as toilets and shower rooms. As the sea level rises usually once in a decade the house structure is single shelled covered with diagonally bent steel cladding and timber. The concrete structure can be seen separately, so the next 170 years architects could modify the three boxes or anything else under the roof but the roof itself hopefully stays.

The concrete structure consists of the roofplate, four posts and floorslabs connected with the posts supporting the boxes. As the construction site is mostly artificial the solid surface- a limestone plateau was 2m under the floor level – the posts are placed directly on the limestone plateau and the floorslabs between the posts are pictorially sligthly off the ground. The building is in an urban area, in a public beach, but there are no ohther buildings in a 250m radius. Kuressaare has much to offer for those interested in architecture – historical and modern. During the last decade lots of new buildings, spa hotels and residences are made by the well known architects in Estonia. 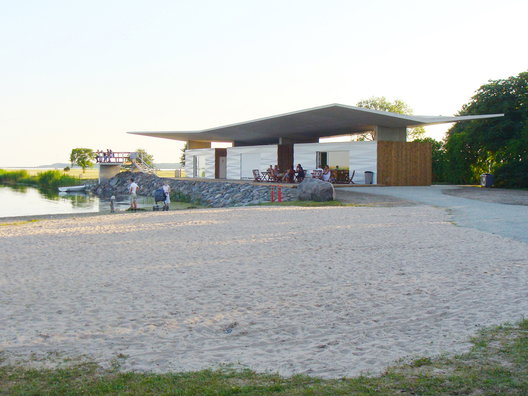