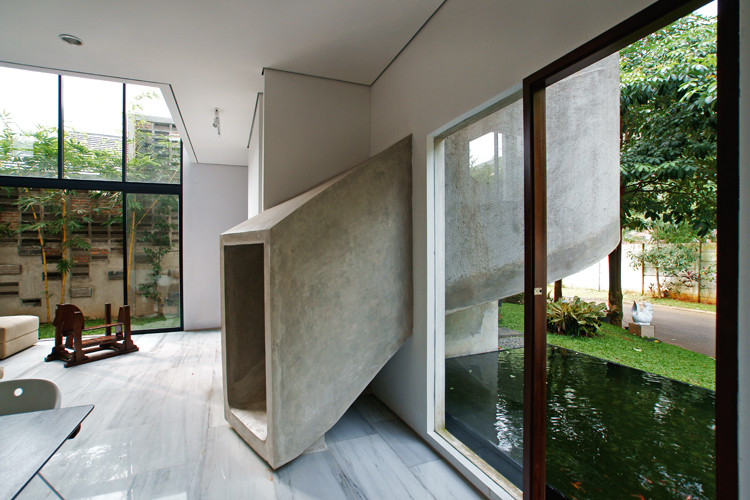 Text description provided by the architects. This 2 storey house is located in Bumi Serpong Damai, Tangerang. Part of a new gated housing cluster, the house is an amalgamation of an existing 120 type house with a new building in its adjacent 200 sqm empty plot. Restricted by its corner setback, the building occupies only 150 sqm of the total 320 sqm land. The look is straight forward, mimicking the sloping roof of neighboring house. The material is almost bare, with dominantly exposed concrete as its main pallete, punctuated by small glass incision and opening towards the main road. Generally, it appears as an inward orientation building with plenty of vertical green walls providing a friendly gesture to otherwise staid looking house.

The house will be mostly occupied by a multi generation family of 3. However, the king of the house is a 5 year old boy who thinks that life is all about play, hence the design of the house. There is a sculptural slider of concrete, tuck in the corner between 2 main building massing. It is his choice of ‘transportation mode’ from his bedroom in 2nd floor to dining room in the 1st floor, instead of the normal open staircase located between the small library and living area. This slider also his favorite place to play after his hectic tuition schedule, covered sometimes with pieces of plastic and clothes on both end to be his secret cave. Except for the 3 enclosed bedrooms, the rest of the house is an open space dominated by white and grey palette of exposed concrete wall and ceiling. Some flaws during the concrete pouring on the wall and ceiling left trace of ‘elements’ that become a natural ornamentation in the house.

Concrete has been chosen as main building material, simply because of its dualism quality. It has a much needed strength as structural element; yet its flexibility creates an interesting tension which produces certain emotion in places it shapes. The decision of using a dominantly concrete wall and roof, however, poses quite a challenging situation in this tropical climate, as this material has been known for trapping heat easily. By having an extremely high ceiling (10 meter in height), applying a special coating of heat resistant membrane on the external roof surface and leaving external wall occupied by plenty of cripple plants (which soon will grow to the roof); it helps to reduce internal heat accumulation significantly. Here, natural ventilation and lighting play an important aspect of the house. All open spaces have no air conditioning system, and dependent entirely on the opening and incision between walls, windows and roof for fresh air ventilation generated by a series of ceiling fan suspended beneath the concrete roof using a metal rod mechanism. To generate an ever changing flow of air, there is some part of walls that has been built apart by 40 cm, allowing the creation of ‘rain’ window by operating horizontal glass louvre within this long gap. And rather than having a low manicured garden, house owner has opted to plant big trees instead, positioned strategically on the garden surface to provide a much needed shade areas during a certain period of the day (especially in the area where glass window has extended floor to ceiling). This few ‘low tech’ strategies have been providing simple solution to many common problems occur causes by the use of extensive concrete materials. 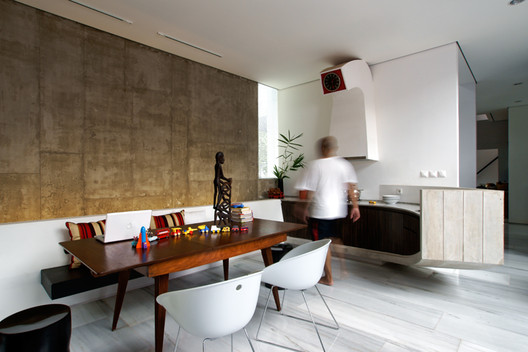