Save
Sports and Leisure Centre / ACXT 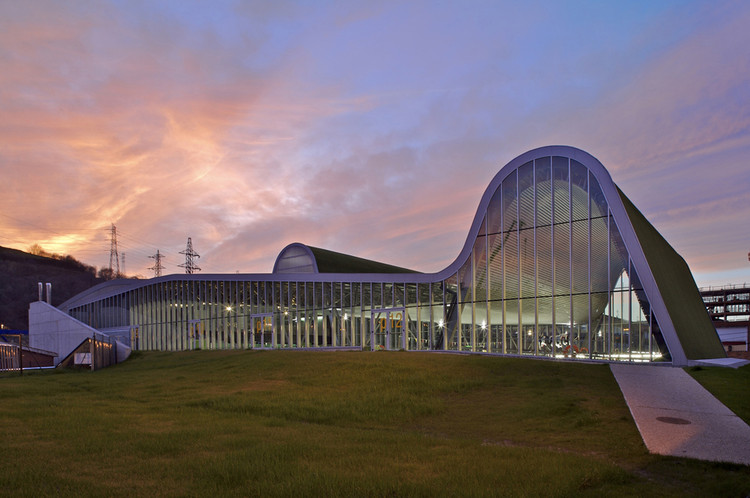 "La Ciudad de Langreo", Asturias: Capital of the coal mining industry in Spain, the town is a very dense conglomerate surrounded by mountains, with a mix of housing, industrial buildings, mineshafts, large cooling towers, heat generating plant, etc. The town centre twists and turns along the banks of the river Nalón.

The project has been developed within a plan to transform and regenerate the coal-mining area of Asturias, following a deep crisis in a sector that until now had been its main source of wealth: its coal mines.

We understood that within this context, the building should have a symbolic, turn-of-the-century appeal, marking a turning point in the life of the coalfields of Asturias.

A final decision as to the exact location of the site was yet to be taken at the competition stage. The project brief asked for an idea, a design concept.

In Langreo, the general impression is that there is little land available. The existing space was taken up by the surrounding mountains, the hitherto booming industrial area and the homes of all those who had found work there.

A composition made up of folds, green waves, in which each of these correlated with the different interior spaces: the swimming-pool, a sports hall which could be converted for concerts, gymnasia, etc.

After the competition, the Town Hall told us where the complex was to be sited. A piece of land in the form of an "L". A restricted space and with a certain air of a "backyard", between the three largest population centres in Langreo, Sama and La Felguera. A space bordered by: a railway track used by local train services run by Spanish Railways, the Civil Guards barracks, the river Nalón, the football ground of the local team and the visual impact of a major road junction: the Sama exit on the Nalón corridor motorway.

Having resolved the functional fit of the programme and organised the layout and levels, the external volumes were designed (according to our proposal submitted at the competition stage) as the direct expression of the volumetric requirements of the complex: greater height for the sports hall, even more height for the rhythmic gymnastics area, less height for the swimming pool, with the exception of the high-diving area, etc. The roof was given the form of folds in the terrain.

The aim of the design was to provide a model for the redevelopment of the most immediate area. The surface area of the green roofs could be extended to form plazas and gardens in adjacent areas currently occupied by ruined buildings.

The initial idea of designing the roofs for people to walk on them was abandoned due to the danger of accidental falls and the high maintenance costs. These were finally covered with artificial grass.

Black dominates the colour scheme for the interior of the "hills". Large walls of Rudolph-type concrete blocks, painted black, as a tribute to the coal-mining tradition that gave life to the area. Blacks contrasting with greens (representative of the ever-present green meadows of Asturias) as well as ochres, yellows and oranges. The symbolic folds of the surface skin of the terrain reveals the strata and huge carboniferous masses of the subsoil, like the area surrounding the swimming pool, painted black: we are in the capital of the Spanish coalfields.

As occurs inside mines, we designed buildings within the building: such as the volume that houses the offices; folds and faults: like the slanting planes under the stands that make up the ceiling of the dressing-rooms; bridges to span spaces and faults, like the walkway that connects the entrance and the swimming pools, and so on.

The materials used for finishing the interior are hard, long-lasting and restrained: painted concrete blocks, plasterboard painted with epoxy resin, flooring made with epoxy resin, visible structure on ceilings; the wood used for the court in the sports hall is the warmest of all the finishes.

Around the perimeter of the court and in order to improve its acoustic quality for concerts and similar activities, some of its faces are clad in perforated mini-corrugated sheet, painted black, with rock wool panels at the back.

Apart from the artificial grass, the roof has 10 cm of rock wool insulation, which provides this with excellent thermal and acoustic insulation.

The ceiling of the swimming pool area consists of perforated strips with an absorbent veil, which does a great deal to attenuate the unpleasant echo typical of these structures.

This is the only area in the whole building designed with a transparent skin, a curtain wall.

The design of the roof is such that the installation of any air-conditioning or ventilation units would be totally incompatible. A number of units, such as those used for the sports hall, were designed to be installed against the façade (next to the railway line run by Spanish Railways). For the remaining installations, including the boiler room, we designed a kind of patio or pit (under the gradient) in those areas where the roofs "touch" the ground. Although the machines are concealed, their adequate ventilation is guaranteed.

The interior lighting is largely resolved with "lines of light", luminaires with fluorescent lamps mounted in continuous lines, drawing in the air the direction of the main circulations or the curvature axis of the vault-hills.

The sports hall consists of the following: Sports court with a stand for seats for approximately 2088 spectators and a maximum audience for concerts (on the court) of 5088 spectators, with a central playing area (longitudinal) for 5-aside football, basketball, volleyball and handball; 3 courts for training and unofficial championships (crosswise); 6 changing-rooms for equipment and referees, 2 changing-rooms for general use (male and female), storerooms for general use and for sports equipment.

Between both pools, a rhythmic gymnastics area has been provided (the area with the highest roof in the whole building); a muscle-building and aerobics room; a multi-purpose space (artificial rock climbing wall, archery, warm-up area, etc.); multi-purpose space (with access for non-members) for vending machines, cultural meetings, exhibitions, miscellaneous public events, etc.; sauna and massage room with separate access to that of the centre (for non-members - this area could be rented off and therefore the project does not include any installations for this); medical centre and first-aid room; and offices, staff changing-rooms, cleaning materials room, installations and utility rooms.

The functional criteria according to which all these installations have been arranged are as follows:

- A single entrance for access and control (for concerts and sports events, other entrances have been provided for).

- Removal of architectural barriers in all routes. 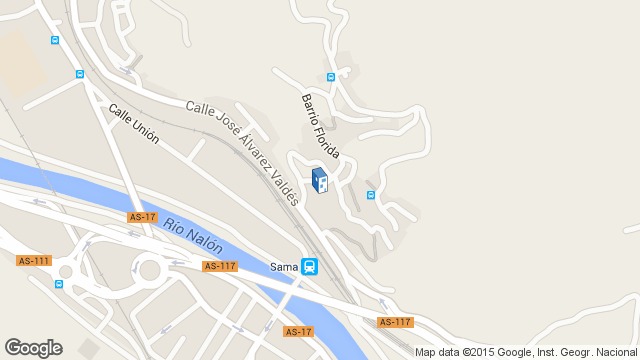 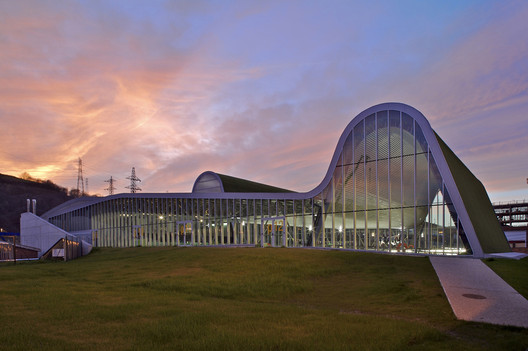