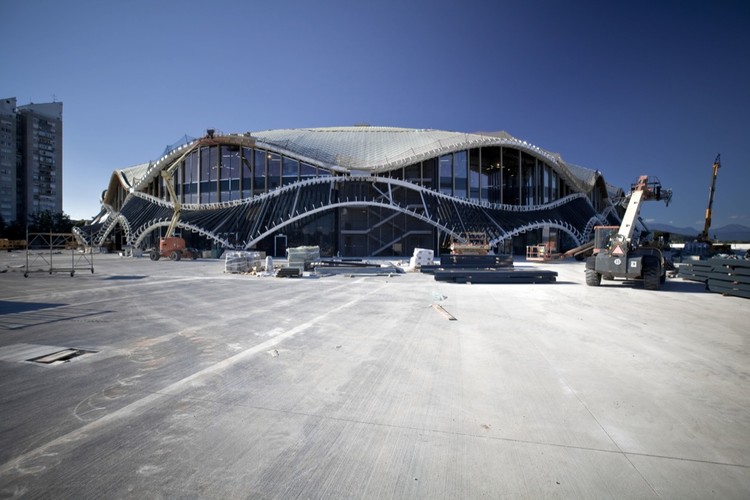 Slovenia will play basketball with Spain on August 10 at the opening match of the new 12,000-seat Sports hall, a multifunction facility capable of hosting sporting events [handball, basketball, tennis etc.] as well as music and other cultural performances.

Located at the north-western part of the park, the sports hall has four levels covered by a shell-shaped dome. The park’s plateau, the edge of the shell scallops and opens towards the interior. The ridges continue all the way to the top, where the facade meets the dome. This outlines the shape of the hall, a shell that opens towards the perimeter with large crescent openings overlooking the park. Along the en- tire perimeter, there is a canopy encircling the hall, acting as a derivative to the scalloped shell. Like the stadium, the entire shell of the hall is also finished in exterior cladding that changes colour depending on the exterior conditions and viewing distance.

The sports hall is a partially recessed building. Its volume is determined by the required seating capacity and the size of the basketball and handball court, which are the two sports that the hall is primarily in- tended for. The position of the stands ensures maximum compactness of the interior space and allows the spectators to be as close to the action on the court as possible. VIP seating is situated between the lower and the upper stands. The warm-up hall is connected to the main hall on the lowest floor, under the surface of the park. The whole interior surface of the shell is determined by the geometry of the steel structure – a large ornament that levitates above the upper concourse, stands, and courts.

The crater of the football stadium and the shell of the sports hall on the park’s plateau become two tuned icons of the new Ljubljana.