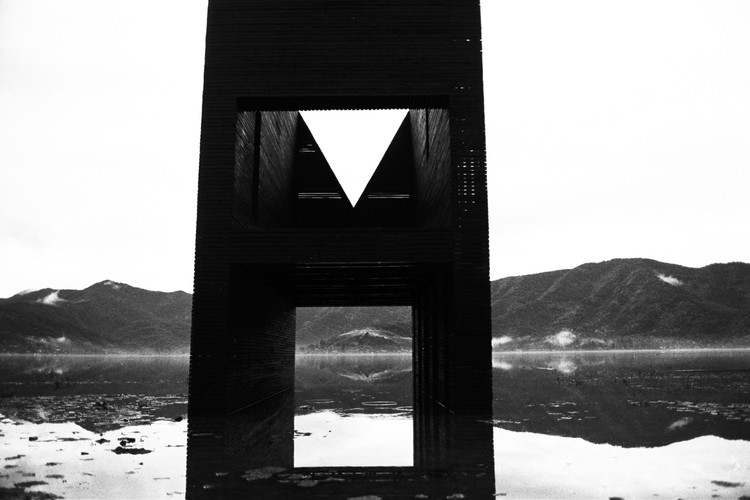 Text description provided by the architects. This project sets out from my own inability to clearly tell the difference between fiction and reality in architecture. The relationship between object and narrative entails what I consider a diffused ground worth being explored. Through the means of traditional cinematographic technique, the construction I hereby introduce creates an imagery of abandonment of the world by virtue of an accumulation of images, symbols and spatial sensations that relate directly to the archetypical features of objects and spaces that have historically accompanied processes of abandonment, deterritorialization, exile and self-exile.

The cinematographic outcome was achieved by way of superimposing a number of images derived from the object, its construction process, and a voice-over that reads the letters written by Manuel Lacunza between 1779 and 1794. Lacunza was a mystic theologian who lived in Chile and later moved to Italy due to the exile of the Jesuits from Latin America in 1767; his letters narrate the story of his banishment together with a group of Jesuits. Inspired by the letters alone, the design approach is hence one which finds in form the primary source for the construction of an atmosphere, which is then put at the service of the above mentioned imagery through cinematography. The object -the building-, in other words, recreates visually and subjectively the imagery of the subject portrayed in the letters. The camera moves across the building through fix planes and travellings, as it deconstructs it into various fragmented images countered by the effect of the voice-over, which indeed constructs a narration.

For a while it is necessary to forget the appearance of the totality of the object and refer only to a series of fragments/images. The images recall the corridors of monasteries, as much as their rooms with limited connection to the outside, and the anonymous views of a desolated landscape from above. In the middle, the unlikely presence of a black, monolithic block, autonomous and seemingly self-referenced. The camera can do nothing but document what is already there -until now there is no possible fiction. It is only in the process of montage, where images are articulated in a new temporal order, that fiction appears: the object is presented to the camera only in a fragmented fashion, and therefore construed by the viewer's own subjective associations. It is due to the impossibility of a totalizing view over the building that the uncanny is triggered.

In opposition to the cubist picture, which narrows down the multiple faces of an object into a single image, the scenography is shown as an object whose fragments are shown one by one, in a sequence that engenders a series of images of which the building is unable to speak, if not through its own montage process. What the shooting deconstructs, in turn, is afterwards reassembled by the narration of Lacunza’s letters. But in this effort the building is still not recognizable as a whole: it remains for the viewer to reconstruct it as a complete entity, if he or she wishes to do so. The object has been thus dismantled by fiction.

The morphological qualities of the building are a result of a mixture of archetypal typologies and the technical requirements that allow for these features to be perceived by the camera. The building is then no more than the construction of an imagery and the way it can be shown: it was meant to be filmed in fix planes and travellings, and its measurements were provided by the duration of the desired planes, as well as by the speed in which the camera slides along the dolly tracks. The size of the scenography is the result of a geometric and temporal system.

The building’s first floor evokes the features of the corridors of a monastery, taking these as the space that mediates between the world and exile. In the second floor, the atmosphere of seclusion is pursued by way of high surrounding walls and the controlled views of the outside, the combination of which alludes, again, to monastic bedrooms -or even the prison. Altogether, the well-measured spirit of asceticism is here conjured up by the building.

What one may experience from the top of the building echoes what is perhaps the most poetic of all actions ever undertaken: the 4th Century ascetic practices carried out in the Middle East. Just like Symeon the Stylite, who built his tower in the desert so he could live in the limit between the world and its abandonment, the building separates the camera from the ground linking it to the distant landscape, sea and horizon, directing the view towards there where there is neither world, nor objects, nor life. Seen from the outside or from far away, the monolithic form of the structure is presented as an erratic block in the landscape. Erratic, insofar as its geometry and size relate to a place which is not quite the one where it is located, for the building has been estranged from an origin that is no longer.

Reinforcing metaphor and literality in this process of deterritorialization, the structure was first surrounded by the site’s natural flooding, and later set on and destroyed by fire. The construction of the imagery of abandonment of the world only makes sense in an ephemeral dimension. Insofar as an architectural object, what remains is the experience of its very construction, its cinematographic record, and the memory of its destruction. The obsession that mobilized this process has not been the creation of an object, but everything that its construction provides to those who were involved in it. 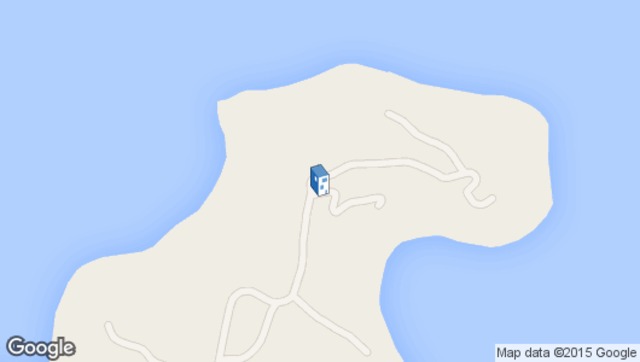 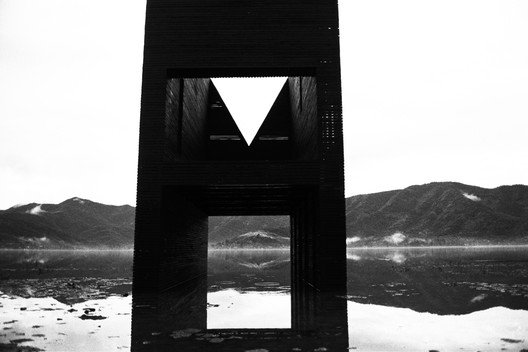