The new Surrey City Centre Library, designed by Vancouver-based Bing Thom Architects (BTA), is set to open on September 24, 2011. This new building marks the next phase of a major civic investment in the area that will continue the transformation of downtown Surrey, from sprawling suburb to the Region’s next great downtown, which began with BTA’s Central City project. Creating dynamic environments that look to the future of Surrey is nothing new to BTA. Nearly a decade ago, the firm designed the incredibly vibrant Central City, which sits down the street from the new Surrey Library. The architectural and social innovation evident at Central City—a fusion of office space, a shopping center and a university—is further exemplified in BTA’s library design. 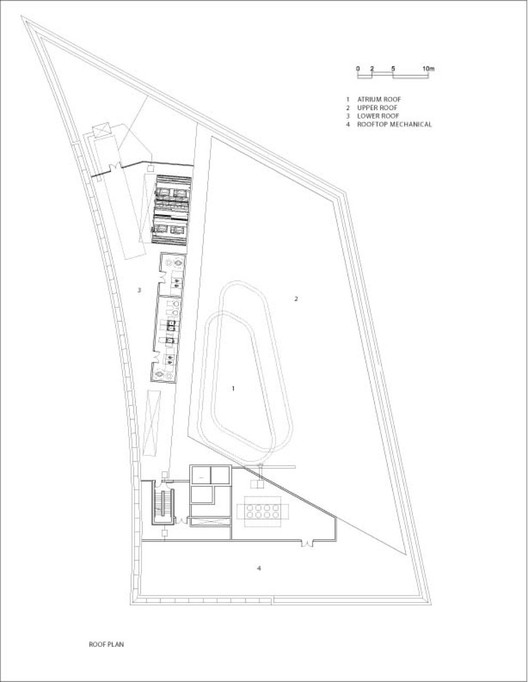 The Design of a 21st-Century Library BTA understands that the role of the library is changing and that the book collection is no longer the central focus. With advances in easily available electronic information and inter-library loans, providing the appropriate spaces for evolving library activities is now the priority. These activities range from the traditional research and education roles, to the need for libraries to become a point of connection and even a gathering place in the community. As a result, BTA’s design includes a diverse mixture of large interconnected “high” spaces with generous natural light and “low” more intimate spaces to accommodate the book stacks and individual activities like studying and writing. These spaces are modulated throughout the complex, and are revealed as patrons explore the building. For instance, one of the most dramatic spaces is the “living room,” a casual reading area adjacent to massive windows overlooking a future public plaza to the east, is in a double height space that is not apparent until you reach the third floor. In all cases, the spaces have been deliberately kept informal to make the library feel like an extension of the patron’s home. As Thom says, “The design evolves out of the need to provide a space for reading, studying, and above all, gathering as a community. This building is very flexible and will accommodate all of these purposes, but does so in a way that will intrigue and entice the users through the building.”

The library encourages the gathering of diverse groups of people from the surrounding community. Its design features large windows, a welcoming entrance with clear sight lines that allow visitors to quickly orient themselves in the space, and an upward winding central atrium and two skylights that allow natural light into the building. The form of the building is inspired by the curvature of the adjacent University Drive, with an added dynamism provided by outward-sloping walls. While seemingly complex, by utilizing state of the art computer modeling software, the architects were able to ensure that the concrete formwork was highly efficient and easy to construct. The exterior concrete structure is carefully detailed as the final surface, thereby eliminating the need for expensive building cladding. Designed to LEED standards, the outward sloped walls also provide solar shading.

Using 21st-Century Technology, including Social Media, as a Design Tool The $36 million library project was funded as part of Canada’s Federal Infrastructure program, with costs shared by the federal, provincial and municipal governments. Because of the time constraints placed on these federally funded projects, the firm went head-first into the use of social media to circumvent the standard (and lengthy) community consultation process. The end result is a dynamic design—one that recognizes and supports the changing role of libraries and that incorporates the needs of the client and the ideas of the community – but that also is coming in on time and on budget.

BTA’s social media ingenuity was born out of the need to compensate for a substantially shortened standard public workshop phase. The project was awarded to BTA in November 2009, the groundbreaking took place just a few months later in February 2010, and the opening is scheduled for September 2011 –in total less than two years from start to finish. Traditional public meetings can take months, so BTA developed a social media strategy using blogs, Facebook, Twitter, and Flickr to speed things up. BTA worked with Surrey librarians to create a blog on the library website which, in turn, was linked to a Flickr site where BTA posted photos of libraries and other spaces the firm liked. Members of the community were encouraged to post comments and photos; those who did not have a computer or experience with social media went to their local libraries where librarians helped them voice their opinion.

In this way, BTA was able to communicate with a broad range of stakeholders in a short period of time, ensuring that the design got off on the right track. These open, collaborative systems online were also used by BTA and the Surrey Public Library to extend the reach of public meetings and “Meet the Architect” talks to the young and diverse population of Surrey that might not have otherwise voiced their opinions in typical Town Hall forums.

“Surrey has a young population – often families with two working parents who don’t have time to go to public meetings,” says BTA Principal Michael Heeney. “We realized early that it would take us months and months to gather information from the public in the usual ways. Social media made it easy for us to engage in a dialogue with Surrey’s large and disparate community. It was a very eye opening process for us.”

The resulting, innovative design of the library reflects this collaboration, and incorporates the needs of the surrounding community, as well as the demand for libraries to adapt to the way we live and work today. With a grand, center atrium and the requisite private study areas, the design includes a large community multipurpose room that will accommodate 120 people, a computer classroom, a meditation room, and a teen lounge and gaming area.

The virtual “workshops” resulted in several aspects of the design that “might not have been incorporated otherwise,” explains Heeney. Combining both the old and the new techniques of public engagement, BTA teamed up with students from the local high school to create, share, and discuss possible furniture designs and layouts for the Library. Among these are: a pair of special listening music chairs that allow users to preview library media or enjoy their own iPod music in privacy and comfort; a “dinner” table for group work; an LCD-screen TV with comfortable chairs around it; and bean bags throughout. Actual workshops with younger audiences resulted in several additions to the interior, including “a place to color and write,” “a clock to see if we are late,” and “big couches for mom to wait for me.” In addition, custom millwork has been incorporated to promote parent-child reading, interaction, curiosity, play and discovery. Ongoing photo and information streams about the library are building public interest and excitement long before the doors open.

Planning for Future Growth Surrey is the second largest and fastest-growing city in British Columbia. In fact, the population is expected to outgrow the originally proposed 65,000-square-foot library in a span of about five years. As a result, BTA encouraged the city to future-proof the five-level building by constructing 83,000 square feet now. The excess space will be leased by neighboring Simon Fraser University to operate their Continuing Education program until the library can grow into it. Similarly, there is a full level being built underground, which can later be integrated into an underground civic parkade, another strategy for future expansion and integration with the community.

A New Downtown Continues to Grow This new building marks the next phase of a major civic investment in the area that will continue the transformation of downtown Surrey from sprawling suburb to the Region’s next great downtown, a process that began with BTA’s Central City project, completed in 2004. This new civic development will ultimately include a new City Hall, a large urban plaza, underground civic parkade, performing arts centre, and additional commercial space – all of which will be arranged adjacent to one of the most intensively used transit hubs in Metro Vancouver. As Bing Thom states, “Surrey City Centre Library is the beginning of a new civic initiative that’s going to further establish the downtown–continuing what we started with our Central City project–for this growing and important city.”