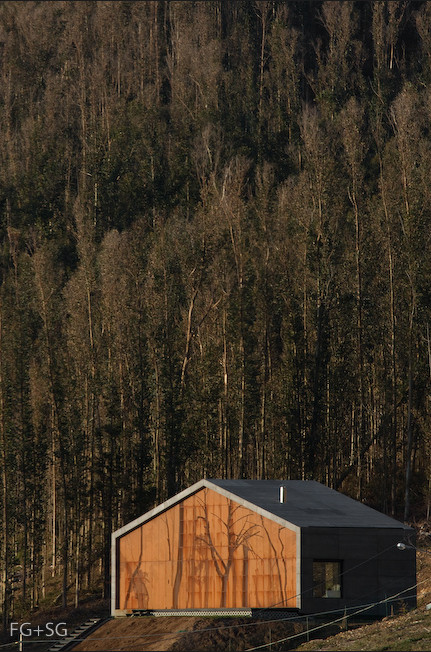 Text description provided by the architects. This prefabricated house was already featured before, but now we present some more detailed material shared by the architects. Designed by MYCC, built in three months and assembled in three days, this vacation house located in the Galician municipality of Cedeira is a good example of the many possibilities that modular construction, up to now associated with catalogue houses, offers today.

The program demanded by the client, along with the unique site of the house and modulation and transportation needs of prefabricated construction, inspired the design of this house built by the young Madrid studio MYCC, formed by Carmina Casajuana, Beatriz G. Casares and Marcos González.

The house is located on a steep slope, in a remote location in the northeast corner of the Iberian Peninsula, an area dominated by the imposing presence of the ocean and the slender forest of eucalyptus trees surrounding it. The terrain is surrounded by harvest fields, family farms and pitched roof houses. This image, protected by the area’s building codes, determined the geometry of the house that, simplified up to the point of evoking the basic house, was conceived as an autonomous piece that sits as a landscape observer and that speaks, with new terms, about the traditional language of the place. The volume was wrapped with two materials with the purpose of setting up a dialogue with the landscape. The roof and the side facades were covered with Viroc®, a prefabricated mixture of cement and wood shavings that, because of its gray color, recalls the wood of eucalyptus trees. This fibercement has a great strength efficiency in spite of being light and, therefore, is easy to maintain and move. The two main facades of the house were clad with perforated Cor-ten trays following the schematized image of a forest silhouette, recreating the image of the surrounding vegetation. This material was chosen because it is part of the local tradition of fishing towns like Cedeira, used for the construction of boat hulls, and the gradual and controlled oxidation of which gives the material self-protecting qualities. Its patina and changing color create a lively image that relates with the natural environment. This interplay between the natural and the artificial also benefits the interior spaces, where the light that crosses through these silhouettes casts shadows of trees in the different rooms.

Being a vacation house, the interior spaces are free-flowing and open up to the unique landscape, turning it into the protagonist. The six modules that make up the house, of approximately 6 meters in length and 3 in width (the maximum reasonable width to enable their transportation by trailer) organize the program as follows: the first one contains the bedroom, which can be divided into two thanks to a blind concealed in the ceiling, and which becomes a partition wall when more rooms are needed; the second contains the bathroom and stairs; the third the kitchen; and the last three the living room. The top floor, under the roof flaps, houses an attic that is a free-flowing space with a double facade that opens up to the sea views towards the southwest and to the forest towards the northeast. It is a space that flows out onto the living room without a designated use, and that can perform as a guest bedroom, tai-chi room or playing area for kids.

The house combines two different systems: prefabricated construction (2D) for the attic and modular construction (3D) for the ground floor. The modules were built in the facilities of the construction company IDM in the Madrid town of Valdemoro. These modules were built with a structure of beams and galvanized steel columns and with floor and ceiling slabs of composite decking with reinforced concrete. The facade walls are dovetail sandwich panels formed of two sheets of lacquered aluminum and an 80-millimeter-thick polyurethane web plate. Several layers of waterproofing stretch beneath the furring strips to which the exterior facades are fixed. Towards the interior, a ventilated air cavity of 20 centimeters lets the structure go through, and there is a perimetral panelling of plasterboard with 46 millimeters of rock wool. The result is a 30-centimeter-thick wall with a ventilated facade cavity, interior cavity and 12 centimeters of total insulation. After an assembly trial in the factory, and after making sure that everything fit in properly, the different modules and trusses of the building were taken apart to be packed and moved in trailers the whole 700 kilometers separating the factory from the remote seaside site where its was to be installed. All the parts were put together again on the designated site in just three days, and the finishing touch-ups were done in the following two weeks.

The end result is a high-quality product, designed with high standards of energy efficiency and whose manufacturing entails a contribution to environmental balance, because the generation of polluting residues and emissions is controlled. The very name of the piece stresses its main assett: a house that is manufactured, not built. Something that reminds us of the efficient chain production of the industrial warehouse, covered and controlled, unlike traditional construction that is at the mercy of external elements that can affect the construction process. One could say that this type of manufacturing moves towards a sustainable architecture which makes a responsible use of the limited resources available. 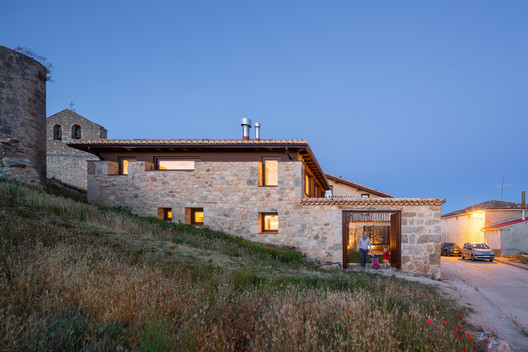