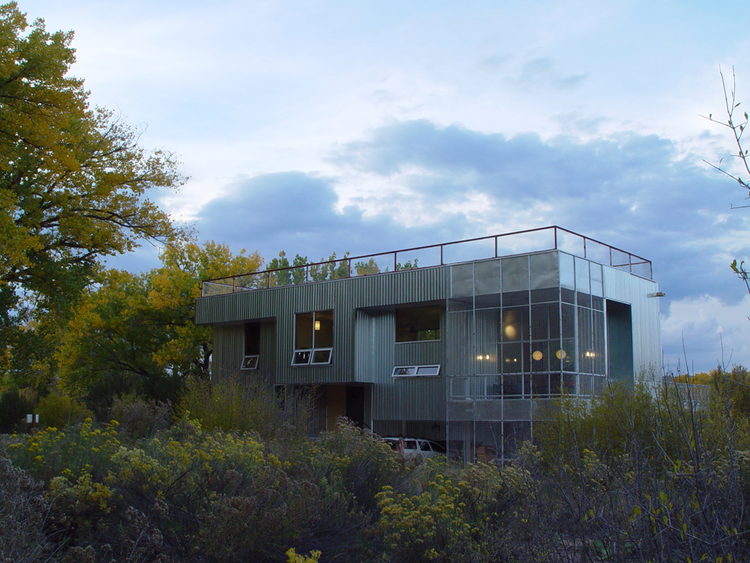 Text description provided by the architects. Designed for an anthropologist and a concert pianist, retiring from Phoenix, Arizona, to this small New Mexico town on a desert site fronting the Rio Chama—not far from Georgia O’Keefe’s famous home on the bluff above this house uses several relatively standard prefabrication systems. SIPs are used for the wall panels only, while the roof and floors are constructed of prefabricated 2×4 long-span trusses. Although it was originally intended to use panels as the roof and floor structure as well, the house was switched shortly before construction to a truss system to simplify the assembly and to reduce the structural lumber splines required in the long spans of the panels.

The owners have a number of animals, dogs and cats and occasional injured strays that they were concerned with protecting from the prevalent local hawks, eagles, coyotes, and rattlesnakes. Rather than compromise the design with the addition of a retrofitted chain link dog run, we developed a thoroughly integrated animal house. For budget reasons, local contextualism, and appropriately barnyard practicality, we settled on chain link as a major material system for the house, protecting domestic animals and people from other animals or from accidental falls from the upper terraces.

Chain link is an ingenious prefabricated system that can be rolled out and hung from above like curtains, stretched and bolted to the walls and frames with large, round, specially cut steel washers that can be inexpensively manufactured in quantity and made available as modular parts in the system. In some places the chain link stands away from the house, providing enclosure to exterior living spaces, and in other areas it hugs tight to the steel-siding-clad wall surfaces, providing visual continuity and textural relief to the large flat planes while at the same time providing a trellis for creeping plants that will grow up from the ground to further soften the profile of the house. 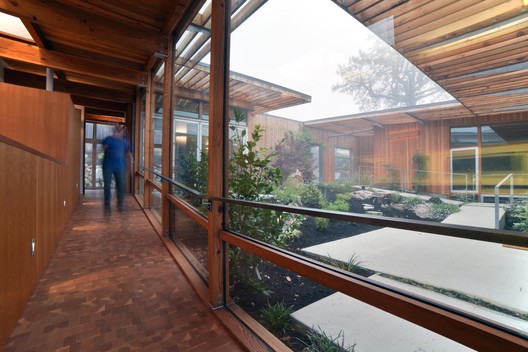