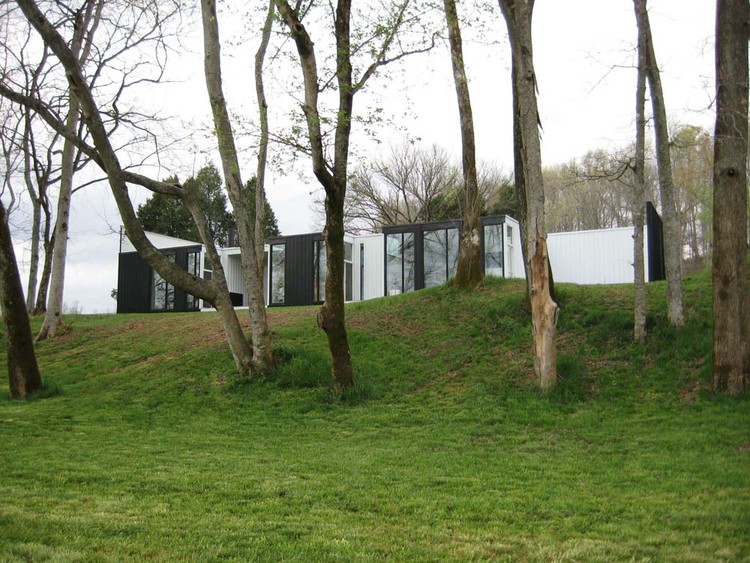 Text description provided by the architects. Site: The twenty acre tract is just southwest of Nashville, not far from Loretta Lynn’s Dude Ranch. The site itself is made up of second-growth hardwood stands broken by open meadows that used to be farmland. The house location sits along a heavily wooded bluff overlooking the open floodplain which is flanked on the south by the Buffalo River.

Program: Provide an affordable weekend home for a young couple with two children. Leah is a graphic designer and Les an attorney. The owners wanted all the amenities of a modern urban home with the ability to open easily to the outdoors; a place where the family can canoe and camp as their children grow.

Design: The scheme is a rectangular box with a sloped roof at the west end. The home sits on a conventional foundation with three foot cantilevers on each side of the house’s long dimension. This allows the house to touch the meadow as lightly as possible.

The structure’s main axis which is oriented east-west, sits parallel to the bluff. Windows and porches face south toward the river. The north, east and west elevations are windowless except for high windows over the kitchen on the west side. This is to shut the house off from its the public road and to make it appear more secure when the owner’s are not there for long periods. Interior spaces are separated by three outdoor decks; living area and each bedroom have private decks. Sliding doors open to these decks in an enfilade arrangement. The partially covered outdoor deck off the living area has its own outdoor fireplace.

Inside, the living, dining, kitchen areas are vaulted; its open wood structure is painted bright white. A hallway along the north elevation connects the living spaces to the two bedrooms. Instead of conventional walls separating the hall from bedrooms, seven foot high, white oak storage units doubling as headboards are used. Rolling panels give further privacy when the bedrooms need to be closed. Two baths serve each of the bedrooms. The floors are white oak throughout with gypsum board walls and ceilings painted white. An Ikea package is used for the kitchen.

The walls and sloped roof are sheathed in preformed metal with a black finish. This black metal is interrupted with white vertical stripes of varying widths. The pattern is loosely analogous to a fine pinstripe suit often worn by attorneys, a send-up to the fact that one of the owners is a lawyer.

There is a grass car park area adjacent to the west end of the structure convenient to the main entrance. 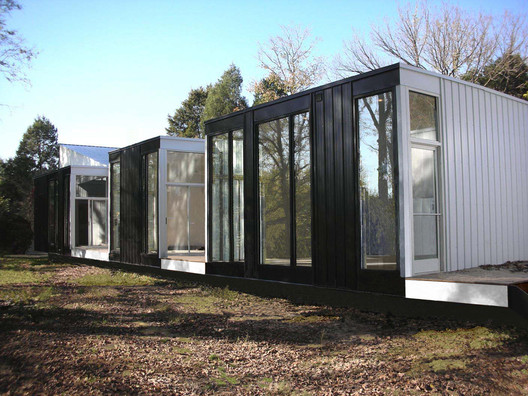 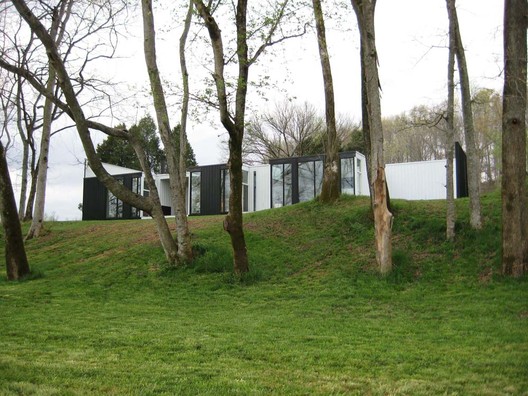