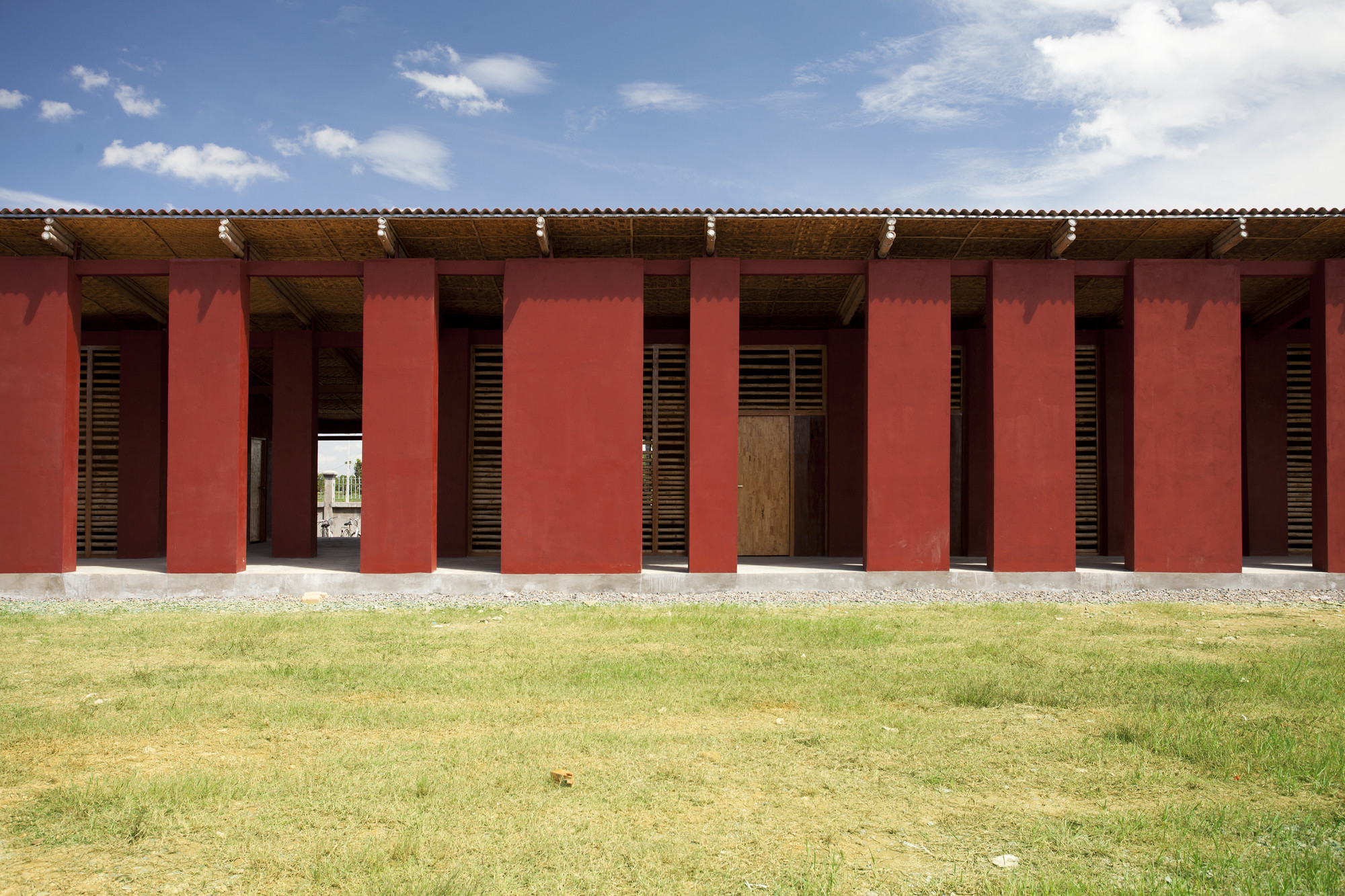 Text description provided by the architects. In 2012 Architetti senza Frontiere was involved by the Association Missione Possibile onlus in building a new secondary school in the Roong village, in Takeo province, 50 km south of Phnom Penh, in a agricultural area characterized by a strong industrial transformation.

Missione Possible onlus has been operating since 2005 in Cambodia through education and health projects. In the village Missione Possibile has built the primary school requiring today the opening of a new secondary school to accompany the students to complete the course of study.

The building designed has dimensions of 62.80 m x 10.20 m, and is placed to one side of the lot in order to release the rest of the area currently dedicated to the game. The location of the bathrooms defines the future expansion area of the school that will host educational workshops and divide the open space into two separate courtyards: one for the main game and the smaller one for teaching outdoors.

The project was an opportunity to assess the spatial hierarchies within the school building. From a typological point of view, the building presents a classical structure of linear block with six classrooms distributed by a hallway/porch.

Design attention has been focused on the elements that define and separate the different spaces of the school: classroom, distribution, and backyard. If the classroom is the place of teaching the corridor represents a place of encounter and of sociability that, in modern pedagogy, is gaining more importance.

For this reason the project enhances this space beyond the specific distribution functions through the size and the character of the space. The hallway/porch measures more than 3 meters wide and five meters high at the hipped roof. Two open-air rooms are added to the corridor interrupting the sequence of classrooms and enriching the nature of the connective space. During the rainy season or during the hottest months the corridor has become the place to meet and play. This is also represented by the symbolic and morphological perspective: the porch and the sequences of openings are the elements that mainly characterize the appearance of the entire school.

The project was an opportunity to rethink the kind of possible space connections between the classroom and hallway. The visit to the school by Giancarlo Mazzanti in Cartagena de las Indias has conveyed new opportunities. In this extraordinary building the classroom walls are made with a cement prefabricated strongly permeable mesh that changes the perception of the classroom rarefying its perimeter.

In this same perspective, we tried to reduce the separation between the classroom and hallway by the use of a series of large bamboo panels fixed. In this way we have replaced the traditional masonry with a diaphragm that favours the constant visual relationship between students and the outside with the aim of standardising educational sites to those of sociality and vice versa.

Each panel measures 3.6 meters per 1.7 and presents a variable rate in the culms of bamboo with greater intensity to the eyes than the sitting position. This device also allows a perfect cross-ventilation of the spaces.

Also the separation between the porch and the courtyard has been subject of debate. A sequence of variable size of wall, but with constant structural steps equal to 2.3 m, defines the boundary between indoors and outdoors.

The aim is to build a variable diaphragm walls that modifies the visual perception allowing more permeability in the areas facing the common spaces and less in the classrooms.

On one hand if the diaphragm between the classroom and the porch is dematerialised, on the other an element of variable intensity has been defined oddly suspended between indoor and outdoor and it leads both to the porch open towards outside and to the hallway closed towards the classrooms.

For the strange logic of identifying revenge, self-denial of poverty and the new forms of cultural colonialism, in Cambodia as in almost all developing countries the construction traditions were replaced by trivialised reiteration of Western building codes that convey the illusory dreams of wealth and prosperity. So over the time corrugated sheets, aluminium, iron and cement replaced the oldest materials.

In our project we wanted to experiment the use of local materials such as soil and bamboo and using them on contemporary forms and industrialized constructive procedures rather than traditional craft forms in order to promote greater rationalisation of the production process that is replicable and economic.

We had the rare opportunity to design (in collaboration with the local workers and associations like Building Trust International and Habitat for Humanity) all four steps of construction: material, element, component and construction system.

First of all we tried to find out the correct material, identify the most appropriate soil and look for the nearest bamboo plantation. Starting from these materials we have designed the soil block sun-dried and bamboo beams so that they were “industrialized” and easily replicable by unskilled workforce.

Carefully examining Glenn Murcutt’s buildings, we thought of a building that was a constant section extrusion inside which developing different processes through non-tectonic elements.

This has facilitated the standardization of structural elements and their mass production.

In the foundations the iron mesh was replaced with a mesh made by bamboo strips nailed that was laid on a polyurethane separation sheet with the land.

Soil blocks (30 x 15 with 10 cm height) were made (with the support of Habitat for Humanity) with an iron formwork that allows to achieve 16 blocks at a time in order to simplify and speed up the production.

The blocks were laid with cement mortar and have a vertical stiffening system made with round section wire blocks within which runs an iron bar 8 mm connected to the foundations which links the base with the top beam as if it was a pillar post cast in moulds to lose (the wooden formwork are construction elements that require specialized workforce).

We used a load-bearing structure in bamboo covered by fibro-cement panels for the roof. 28 bamboo beams have the same size of 11 meters that lay on three stands of different lengths, 6.60 meters for the classrooms and 3.3 meters for the porch.

The size of the lugs wrench is negligible. To test the load performance requirements we designed a beam composed of three bamboo culms connected by threaded rods. The bamboo beams are connected to the top ones through a system of iron brackets. The false ceiling made by palm leaf, softens the internal image and creates a micro air insulated chamber.

In the end the plasters were made using two distinct ways: outside we used a clay plaster added with cement and colour pigments to increase wetting effect tightness of pouring rain, while inside we used a lime plaster.

From the thermal comfort point of view some simple planning strategies were set: first, the building has one large pitched roof North oriented to decrease the angle of incidence of the sun radiant effect.

The ventilation was carefully taken into account: inner hipped roof height of over five meters favours hot air escape, while the replacement of vertical diaphragms with permeable elements such as bamboo panels facilitate horizontal ventilation.

The porch walls protect the inside from the sun and produce a microclimate that filters the transition between indoors and outdoors. The roof coverings in fibro cement of 12 mm can not be considered the most suitable material to tropical areas but, compared to metal shows better efficiency.

Very fresh classrooms even during the period of heat wave is the excellent outcome even though classrooms are too breezy during the rainy season, and light problems with the wind blown rainfall sometimes occurred.

Trying to approximate a percentage we can believe that quantitatively over 75% of materials comes from the territory, while from the qualitative point of view the main tectonic elements (structure, walls and roof) were built using local materials, while concrete and iron were only used to foundations.

The association Missione Possibile onlus, our partner and beneficiary of the project, has accepted the challenge to experiment with a new form of school because it believes it might be a different way of teaching. And now, it’s up to them filling classrooms of meaning and providing Cambodian teens with a new local development opportunity. 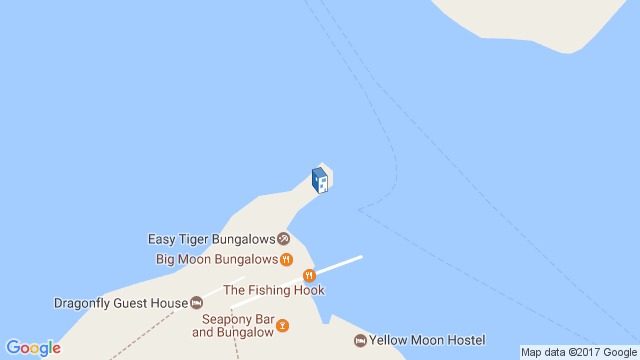 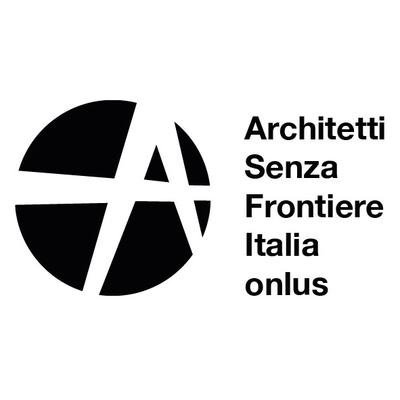