WEISS/MANFREDI broke ground yesterday on Cornell Tech's pioneering building, "The Bridge." Spearheading the first phase of the $2 billion Roosevelt Island tech campus, the new building will "bridge" the gap between academia and industry, providing a seven-story "corporate co-location" loft where students and industry leaders will collaborate.

“The Bridge is a crystalline incubator with river-to-river views and creates a three-dimensional crossroads, an ecosystem of innovation to catalyze collaboration between academics and entrepreneurs,” say design partners Marion Weiss and Michael A. Manfredi.

"At the campus level, Tech Gallery, the building’s entrance atrium, opens to the central campus green and is linked to the campus grounds with a series of landscaped terraces. The gallery and atrium open to views across the campus and create a three dimensional crossroads that encourages spontaneous conversations and collaboration throughout the building.

"The cantilevered southwest and northeast wings shelter outdoor social spaces that animate the ground floor retail spaces and entry terrace. The silhouette of the rooftop photovoltaic canopy unifies the campus’ architectural expression and is an iconic signature of the University’s commitment to sustainability. As an important element of Cornell NYC Tech’s new graduate campus, The Bridge is a crystalline incubator, recasting prior academic and corporate models to establish a catalytic setting for research and innovation.

“We hope to create visual and physical connections between academic and profession hubs to foster an ecosystem of innovation,” adds Weiss and Manfredi.

The building is slated to open in the summer of 2017.

News via WEISS/MANFREDI and Fast Company 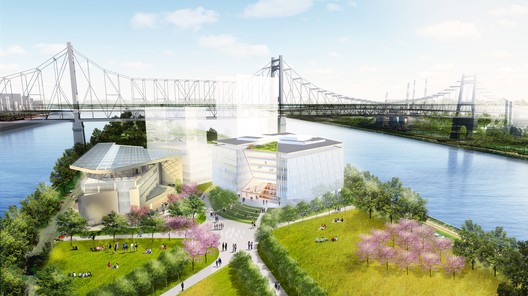