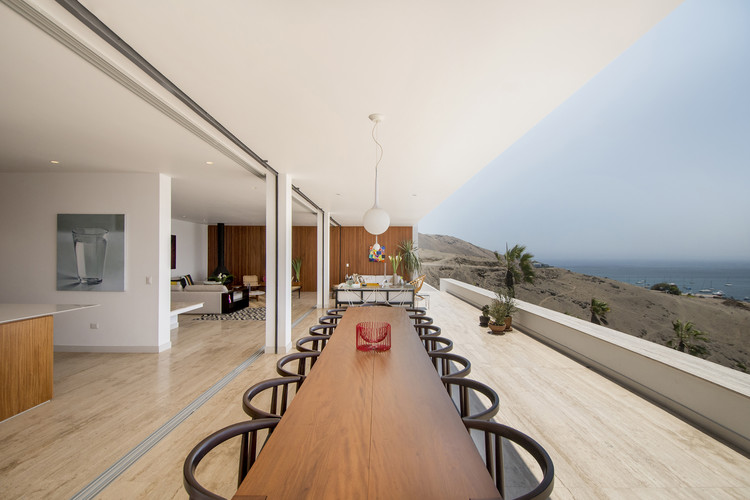 Text description provided by the architects. The commission consisted of a remodeling and expansion project for a house for temporary use located on the hillside that defines the bay resort of Ancon, a neighborhood 43 km. north of Lima in Peru.

The clients belong to the third generation of the same family that owns the house. The purpose was to rescue and to value the original project of their grandparents.

This house was originally designed in 1958 by the Swiss architect Theodor Cron, whose architectural production has become one of the leading references of Peruvian modern architecture.

The original design offers a language with markedly horizontal elements, which form spaces with single heights but ensure a smooth spatial continuity between the interior and exterior; using, for this purpose, subtle transitions of heights, low parapets and long horizontal and vertical planes.

This compositional proposal does not properly handle views into the bay from the different environments of the house. The materials reinforce these spatial relationships, coating certain walls with natural stone, which was obtained from the excavations of the hill for the construction of the project.

The new proposal should respect the qualities of the original project and it was considered paramount, prior to the design, to study the original plans and extend the documentation on the work of architect Theodor Cron, to understand the best possible way to intervene the existing building.

The approach starts by releasing the building from all extensions and modifications that were not original to the design, to later consolidate the original proposal rescuing the essential elements that defined it.

The renovation focused on the adequacy of the service areas according to the new systems, equipment and customer requirements as well as updated finishes, where it was felt that the new materials used had to be neutral so as to not compete with the existing materials.

The extension is defined from the requirements of the customers of new social and leisure environments, for different activities during weekends. The additional program includes a new terrace for the bedroom level and a new swimming pool and terrace. A third and fourth levels are thus created for complementary technical services.

The design follows the guidelines set by the original project, using low walls on the terraces and long horizontal surfaces, but reinterpreting and adapting them to the profile of the edges of the site, as well as palms and other existing trees. The language of the composition is enhanced by using natural local stone in claddings.

In the private areas of the house we sought to strengthen the character of tighter spaces, with smaller openings and new wooden louvered walls that control the views from the outside. Unlike the panoramic views of the social area, the views from the bedrooms are directed to particular points of the bay. 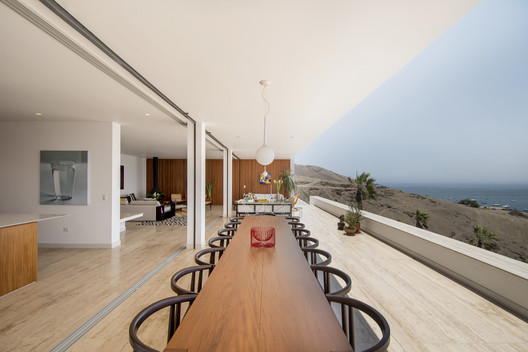