Between Sunday, May 17 and Monday, May 18 projects developed under the second phase of Espacios de Paz (Spaces of Peace) were inaugurated in five cities across Venezuela. A genuine exercise in participative design, 20 Latin American architecture groups worked for five weeks with communities in neighborhoods dominated by violence, high dropout rates and crime to convert deteriorated and abandoned spaces into public places of peace.

For each project, four groups of young architects worked together to carry out a process of dialogue, research, design, and ultimately the construction of either an athletic, social or educational facility to be administrated by the local community. Espacios de Paz is coordinated by the local office of PICO Estudio, with guidance from public institutions and under the leadership of Isis Ochoa, the High Presidential Commissioner for Peace and Life.

ArchDaily en Español Editors, Nicolás Valencia M. and José Tomás Franco, were invited by PICO Estudio to document and view the five projects in their final phase of construction and speak with the architects and community representatives about the development of the projects and some of the challenges faced in the process.

Learn more about each of the five projects after the break.

Caracas, Barquisimeto, San Carlos, Cumaná and La Guaira were the five Venezuelan cities selected for this year’s Espacios de Paz projects. The exact location of each project can be seen in the map below.

The texts were written by José Tomás Franco (Barquisimeto, Cumaná) and Nicolás Valencia (introduction, Caracas, San Carlos and La Guaira) for Plataforma Arquitectura and translated into English by Katie Watkins.

Notorious for being one of the most dangerous parts of Caracas, “El 70” is a residential area with informal housing, expanding into one of the mountainous ridges that surround the city. At the area’s highest point, the offices of MAAN, Proyecto Colectivo and Grupo Talca, along with the local community, developed a multipurpose room, with spaces for the elderly and a storage room in the basement of an existing incomplete construction.

“We build with what exists, it’s very simple. We work with four materials: steel, concrete, wood and plastic,” explained Maximillian Nowotka from MAAN. “It’s a work-school: there are people with no experience in construction, (but) they started as helpers and now they are carpenters. It is part of the project philosophy: engage through work.”

In the face of a total absence of public spaces in El 70, the project included an elevated lookout and a plaza, providing a panoramic view of the Venezuelan capital. “It will be a space of peace and a meeting point where the whole community can feel safe, and above all free,” said Cristian Abreu, the local spokesman and producer of the neighborhood’s recording studio.

Located southwest of downtown Barquisimeto, in a residential area of Los Cerrajones, this project responds to a complex urban situation, intervening on a much larger scale than past Espacios de Paz projects. The site was practically abandoned; a sunken park hid in the middle, surrounded by a large slope used as a place to park cars.

As the neighborhood lacked basic infrastructure, the project took on urban responsibilities beyond the architectural space. “Water collection channels, connection to electricity, retaining walls (…) these issues were not taken care of in the beginning, so the project extended its reach and created a series of interventions that together generated a “territory of peace,” a kind of park with many levels of intervention,” said Antonio Yemail of Oficina Informal.

Aside from these challenges, the architects encountered a vibrant community, with a great cultural and athletic potential. During group meetings, the idea to develop a “cultural industrial park” that made use of the slope was developed; the programs were arranged on the perimeter, reactivating the central park as an open meeting space for the community.

Local construction worker Manuel Simanca recognized the scale of the project and its importance for the future of the community: “We hope the space will endure because we are constructing the biggest “Espacio de Paz” that has been completed in Venezuela. We hope the children will also take care of the space because this will be for them.”

270 kilometers southeast of Caracas, in the plains of Venezuela, sits the city of San Carlos, which hosted a large portion of the events associated with the XV edition of the Juegos Deportivos Nacionales de Venezuela (National Games of Venezuela). As often happens with these types of events and investments, a large portion of the athletic infrastructure constructed for the event is now in a deplorable state of neglect. A small soccer stadium built in a residential part of the city has, according to the neighbors, been transformed into a hiding place for thieves and drug addicts.

In San Carlos, the pre-existing infrastructure was a strong starting point for the team, which comprised the offices of PGRC, Colectivo Independiente, Animal, Mano Alzada and Entre Nos Atelier, and recycling became the key component of their re-thinking of the site. “Its sport-specific purpose is what led to the failure of the building,” said José Rodríguez of PGRC. “San Carlos only has around 100,000 inhabitants and there are few high-performance athletes to justify using the space in this way. We saw the possibility of changing the use of the space.”

The team’s design not only revives the stadium’s athletic activity, but also incorporates an Abasto Estatal (a government-run store), an Infocentro (a small government-run computer center), a children's library, a recording studio and multipurpose spaces. “This is what we built and this is what will remain. As the years pass, we are always going to provide the security and attention it deserves,” said José Miguel Pérez, a young worker on the project.

After an intense cleaning of the chosen site, which was filled with garbage and rubble, the team executed the project by following the context of the site, without plans or pre-established ideas.

Located in Valentín Valiente, within the city of Sucre, the site is a large area with steep slopes. Previously used as a drive-thru movie theater, only the giant screen remained. The space’s former use was re-scaled, creating a sort of central amphitheater – with its own “human-scale” screen – flanked by a shaded space/park; a revived court and covered bleachers culminating in a multipurpose room.

“When we arrived we had to deal with a “learned helplessness” from the local inhabitants who were used to politicians arriving and promising a change in their community that would never happen (…) We have managed to change this idea, [to show] that things will happen, but with their [involvement],” said Leticia Aguilar from Taller Activo.

The four interventions, combined with the creation of a new community council, seek to give the space a preventative role against violence. “After this space, we are very enthusiastic to keep working as a community, growing and becoming a community council. And the space isn’t going to stay like this, it’s going to be even bigger,” said Grey Guilarte, the leader of the community and spokesperson of the new council.

Founded on a narrow coastal plain at the feet of El Ávila – the mountain and natural park that separates Caracas from the Caribbean – La Guaira suffered through one of Venezuela’s worst natural disasters: the 1999 Vargas Tragedy. Over three consecutive days, torrential rain provoked landslides and flooding, destroying buildings and dragging them to the feet of El Ávila. Today, the city has still not fully recovered from the disaster or achieved permanent housing for the hundreds of victims relocated across the country.

One of the buildings that survived the tragedy lies in the foothills of El Ávila, near the San Julián river. Once covered by mud, the neighbors cleaned the building and converted it into a meeting center for the three neighborhood councils. With Espacios de Paz as the driving force, Ruta 4, Asymetric and CAPA, along with the local community, worked together to repurpose the building.

“The needs are quite general,” said Martín Flugelman of CAPA. “Everyone wants a quality public space for meetings. We didn’t want to do a project with a defined use; but rather to find a site where they can appropriate their own space.”

On the first level, the project contains a flexible space with an emphasis on art and music, an Infocentro and a public plaza (formerly used for parking). On the second floor and outside, a terrace will be constructed for public events and traditional festivals, which are deeply rooted in local culture. “I’m at least going to come here to study and finish my degree. I haven’t studied a lot, but I want to help my family, said José Antonio Nobuto, who helped with the project’s construction.

“This isn’t a housing project, nor a place to live. With the aim of training people, spaces are produced. There’s a certain faith that architecture can create this kind of moment, where the people and the society work together to carry out projects,” added Flugelman. 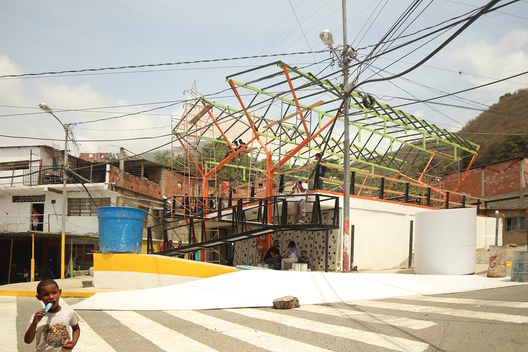