Save
Villa Altona / The Common Office 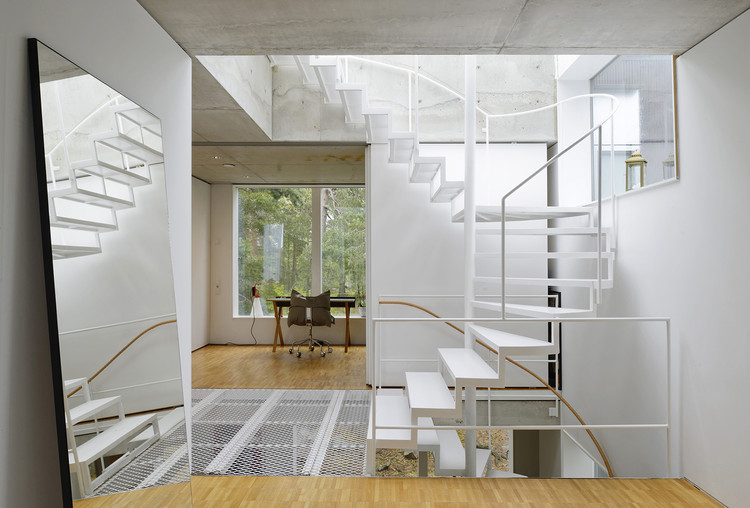 Text description provided by the architects. Villa Altona is located in Törnskogen, in the municipality of Sollentuna, Sweden. The site is steep with a height difference of nine meters between the ground floor and the street level. The contrast between the suburban landscape to the south and the untouched forest to the north, gives the site its identity. The two opposite characters of the site generated the form, placement and colors of the house

The building sits on the slope, orientated in an east - west direction. The house creates a clear border between the two different site characters. To the south a traditional villa garden faces the neighbouring houses. To the north, east and west the house faces the untouched nature.

The building is divided into four narrow units, each 2.85m wide. The four units are offset horisontally and vertically, following the high differences of the terrain. The facade folds itself into the landscape, avoiding trees and boulders. The large windows connect the interior with the surrounding nature, as well as letting in light from all the directions of the compass. A large sky light (3.0 x 2.2m) fills the center of the house with light and contributes to the transparency of the building.

The interior is one continuous space divided only by the offset building units.  This creates smaller private spaces within a larger space. The family member's private rooms have generous proportions and border directly to a large negotiable space. The relation between negotiable-, and private spaces are regulated with large sliding wall partitions. The house sits on a plinth foundation, avoiding any rock blasting. Both the floor-, and roof slabs are in situ cast. The outer walls are in situ cast with thin supporting steel columns. The outer facade is covered in milled wooden panels.