Text description provided by the architects. I D E A

The form of the building derives from four main assumptions: a new Marshal's Office building should fit into the existing landscape with respect to Stubben's Ring old part of the city, highlight the function it has, reflect the simple and clear functional program and give a sense of accessibility and transparency but also authority, order and balance.

The building, with its range and function, consists of both the office building itself and the semi-public space around. Due to the location of the site and complexity of the building, the semi-public, space was located underneath the building, thus making the whole structure optically lighter. The exterior part outlines the cavity around the whole building, which makes it float above the heavy base and provides an outdoor terrace underneath the upper floors. The interior part is meant to be an extension of the open space around the core of the building and was designed as a transparent, multifunctional and flexible space for various purposes. To increase the sense of accessibility and the impression of consistency between the two zones, the external green spaces correspond with the internal winter garden. The only solid element of the floor are the communication cores.

The base for the whole structure is a heavy, stone monolith, which comprises main functions of the public administration authority, with the floor of the House in its' very center. The solid pedestal symbolizes a foundation for all the other parts of the marshal's office building. The interior of the base opens to the hall above.

The building fully covers the plot and is determined by its borderlines. The interiors are articulated by two atriums which play crucial role in the air circulation and are thermal buffers (collect heat in winter and provide ventilation and fresh air supplies in summer). A strong accent indicates the historic buildings height, where the main body of the building is noticeably pushed, giving space for the marshal's office terrace. The only continuous element that rises along the whole structure is the vertical dominant with the mast on top. The whole structure, it's heights, forms and proportions enables it to lit all the rooms with natural light.

The building is designed to be easily adaptable for variety of purposes. The first two floors are fully accessible and public. Various events might be organized simultaneously in diverse spaces without interfering the regular work of officials. All the facilities are fully adjusted to a wide range of uses. Flexibility and outstanding acoustic parameters was one of the key aims. A continuity and diversity of various activities within the public part of the building was an important aspect included in the program.

The main feature of the construction is the limited amount of its elements, visible between the two parts of the building. A characteristic feature of the slabs in the upper part is their considerable overhang with limited bending, due to the glass elements between slabs. To achieve the effect of floating, a load from edges of the slabs had to be transferred to the load bearing structure in the central core of the building. 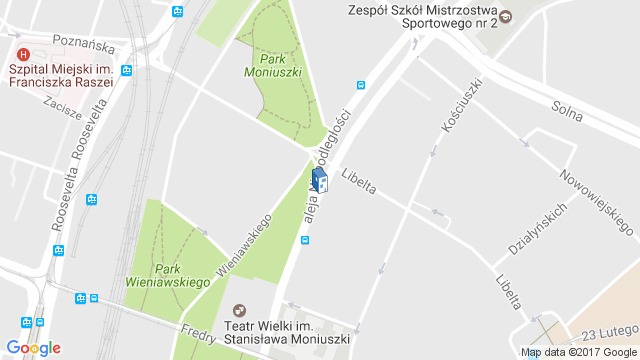 Location to be used only as a reference. It could indicate city/country but not exact address.
Share
Or
Copy
About this office
WAPA Warsztat Architektury
Office
•••