Save
Small Street House / Base Architecture 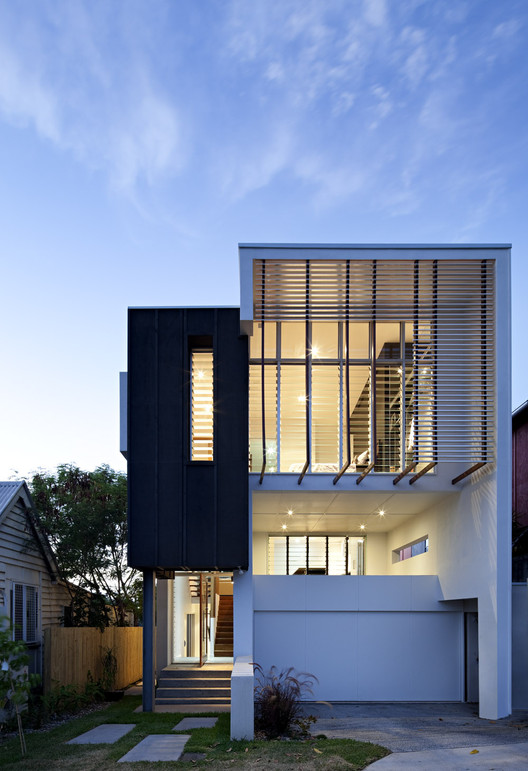 Text description provided by the architects. Having designed many houses on small lots in and around Brisbane under the current small lot code, BASE has identified many elements that essentially drive the design of these houses. The small lot code has been written in such a way that it inhibits the resolution being bulky and over shadowing to the neighboring properties, which is strongly supported by our practice. This particular house embodies many of these attributes whilst at the same time justifying the existence of other parameters as outlined in the single unit dwelling code.

BASE have designed houses on almost all combinations of small lot configurations from corner lots, flat lots, sloping lots (front to back) and (back to front) and also side falls. In the case of the Small street house being a site that slopes both from front to the back and across the site, it offers many opportunities to explore the spatial relationships proven across a mixture of levels and functions within the house whilst at the same time exploring the close relationships that exist on the adjoining lots.

In order to take advantage of the aspects of the site it was critical to open up the house where ever possible and allow access to areas not usually explored, both visual and physical, such as roof top terraces and low height garden areas within the house, that allow the house to breath. With such a small footprint, that is governed by the GFA requirements on the whole site it became apparent that the form of the building to allow this footprint and associated functions would express a character of its own as opposed to the traditional pitched tin roof.

Along with the parameters of the residential house lot code, character code, single unit dwelling code and the requirements of the client, it is equally important to address the architecture of the surrounding dwellings. After assessing the surrounding neighborhood it is apparent that there are various existing strengths in the built form that express there own character. From the quaint workers cottages, the new contemporary multi-unit dwellings and the refurbished wool stores on the river at the end of the street it is an eclectic collection of dwellings expressing different characters.

The overall character of these dwellings is expressed in the form of the building which includes flat roofs, low pitched roofs, parapets, skillions and gables. Coupled with these forms are the use of materials that may include a range of face brick, weatherboard, fibre cement sheeting, metal cladding and rendered brickwork facades, which in our opinion further supports our notion of the contemporary nature of the house we propose.