Save
Monocle's Inaugural Conference In Lisbon Asks: What Is Quality Of Life?
Share
Or
Copy

Monocle, a briefing on global affairs, business, culture and design, was founded by in 2007 by Tyler Brûlé, the former Editor-in-Chief of Wallpaper*. With over thirty correspondents working around the world, the magazine also has local bureaux in Tokyo, New York City, Hong Kong, Zürich, Toronto, Istanbul and Singapore. This month saw the publication host their inaugural international conference, centering on the enduring theme that has preoccupied the magazine since launch: Quality of Life.

Set against the backdrop of Portugal's capital, Lisbon, the event was hosted by Brûlé alongside editors Andrew Tuck, Robert Bound, Sophie Grove and Steve Bloomfield. The opinions of twenty-three internationally renowned speakers―including Martin Roth (Director of London's Victoria & Albert Museum), Taco Dibbits (of Amsterdam's Rijksmuseum) and Brazilian architect Isay Weinfeld, alongside the Mayors of Oslo and Porto―were keenly listened to by 160 delegates who had traveled from across the world. The points for discussion allowed for a breadth of discourse that spanned housing and urbanism, to explorations of the 'high street' and the significance of the museum in the contemporary city. The thematic scope of these conversations made them accessible, inspirational and, more importantly, both relevant and widely applicable. 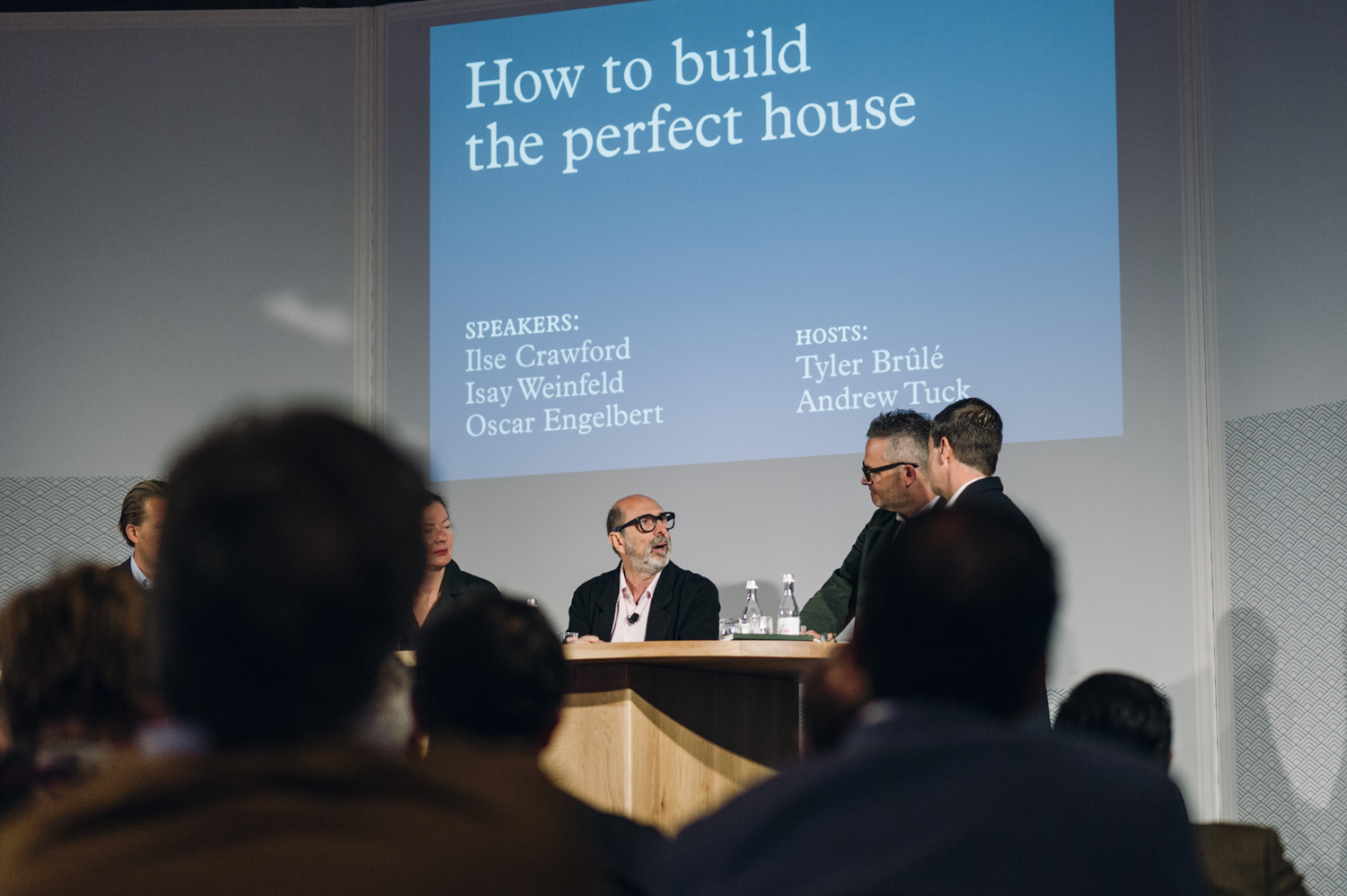 The opening discussion―How do media brands make our cities?―set the day's theme. Hans Nijenhuis, editor for the Dutch media group NRC, spoke about the company's move from the outskirts of Rotterdam to the centre of Amsterdam in order to nurture a closer relationship between their journalists and the passing public at large. The emphasis they have placed on operating from an architecturally significant space for debates, book launches, and informal drinks demonstrates, for Nijenhueis, the importance of a being woven into the fabric of the city.

Erik Spiekermann, typographer and graphic designer (famous for the redesign of The Economist in 2001), was particularly vocal on this subject. "Everyone and their brother can start their own magazine" he declared, lamenting the fact that even though "there's an amazing revival of small print, they don't last beyond their first issue." He proposed that there is an unequivocal need for consumers of the printed word to communicate through the medium of paper. Author, entrepreneur and critic of the current internet trend's relationship to culture, Andrew Keen, agreed. "The 'physical' is what anchors media. The great media brands of the 21st century are the ones who can distil the incredible, growing condensation of new, innovative talent." He spoke of the latent potential in the power of the city to facilitate new kinds of media, postulating how, "as cities become more and more transparent, might we harness the data of the city?"

For the second debate―How to build the perfect house―Monocle had assembled three panellists: Brazilian architect Isay Weinfeld, London-based housing specialist Ilse Crawford, and Swedish developer Oscar Engelbert. Alongside promoting fastidiously worked floorplans from the architects he collaborates with, Engelbert is particularly known for carefully branding his projects by either heavily emphasising their history or, if there isn't one readily available, creating it from scratch. His collaborations with BIG has given his Scandinavian property company a degree of notoriety.

The conversation quickly turned to Weinfeld's thoughts on the matter. Referencing his home city of São Paulo, which he described as a "pastiche of styles," he spoke of the importance of being able to test ideas or, as he termed it, "architectural exercise." He continued by saying that "São Paulo's lack of personality became its personality" and, for this reason, designing homes in this city has afforded him a certain freedom to experiment. When asked about his use of materials in the home, he answered: "I don't really care about materials; that's completely related to the client. Cement and marble are just the same to me ― it's more about the emotions and proportions of the space that you're designing. You must ask yourself: what will your client feel comfortable in?"

"When designing a house you should put your ego away. I'm a better listener than architect!" - Isay Weinfeld http://t.co/McjX7xioHa #Monocle

The third panel―entitled How the museum became the modern cultural powerhouse―tackled the issue of the museum's place in the 21st century city. Martin Roth, Director of London's V&A, referenced their current exhibition (All Of This Belongs To You) as an example of a show which challenges the institution within which it is set, proposing the function of the museum as a home of 'civil protest' which has the potential to reconfigure its urban situation. In spite of the V&A's recent success (visitor numbers have increased by one third during Roth's tenure), he doesn't believe in the solitary power of the brand of the institution itself: "this is something we must fight for everyday."

When asked who the Rijksmuseum 'belongs to' Taco Dibbits, Director of Collections, responded by suggesting that although it reflects a proud national and cultural identity it is, without question, an international institution. "We were the first to digitise our entire visual collection and as we've done so we've found that the more we provide our collection online, the more people want to experience the real thing. It seems that people are in search of authenticity." Jack Persekian, Director of the forthcoming Palestinian Museum, was also on the panel. For him, museums are about guardianship; ''a platform which communicates identity." Dibbits continued by suggesting that museums, alongside libraries and other cultural spaces, are the cornerstones of a country ― important tools in the concept of 'nation building'. As such, and in contrast to the case in places of conflict around the world, "they should shelter and protect the artefacts they house."

Following panels on the design of office spaces and how to reinvent the high street, the day's conversation closed with a look at how metropolises are changing around the globe. In Here's how to make a city, Monocle brought together Rui Moreira, the charismatic Mayor of Porto, Stian Berger Røsland, the Mayor of Oslo, Demian Horst (of Umeå Institute of Design) and, for an encore, Erik Spiekermann. In this panel the question of what quality of life is became more apparent. All political charm aside, Moreira and Berger Røsland's unwavering passion for the future of their cities encapsulated the optimism of the conference. Each discussion provided a rich set of anecdotal experiences, ideas and success stories―many of which inspired new conversations between delegates throughout the course of the day.

Above all, the conference demonstrated that the transformation of good cities into great ones, and maintaining this success, is less about relying on the influence of grand urban gestures and city-wide masterplans than it is about fostering the smaller, more entrepreneurial ventures that craft a city's personality. Lisbon, a living example of this approach, provided the perfect setting for these discussions.

The debate surrounding Quality of Life has a global resonance and Monocle's approach to tackling the discussion is refreshing. The conference had an air of palpable optimism, harnessed by the depth of knowledge and opinions from a collection of world-renowned speakers and contributors. Should their next conference in 2016 continue along this trajectory, I would argue that there is much to look forward to ― and much to discuss.

You can register your interest for the 2016 Monocle Quality of Life conference here. In the meantime, you might like to follow Section D (art, architecture and design) and The Urbanist on Monocle24 radio.