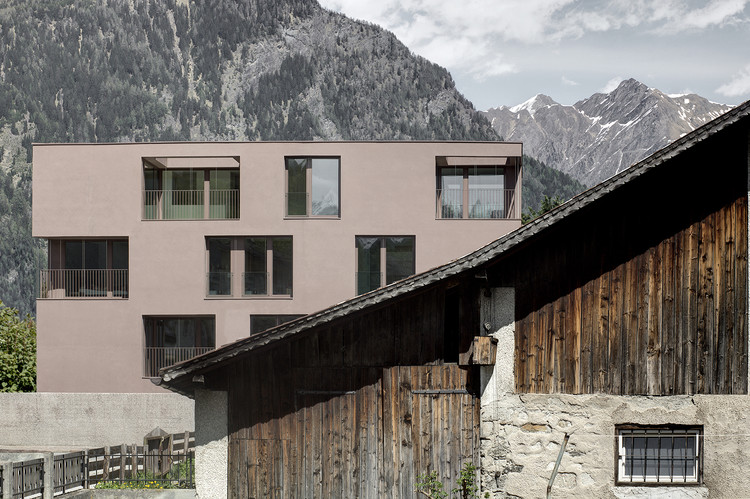 Text description provided by the architects. The design of the recently completed residence Pfarrmessner presents itself to the observer in a uniform and almost solid manner. The building is situated at the southern outskirts of the city of Sterzing/Vipiteno, at approximately 950 meter above sea level. It is also the southernmost city of South Tyrol, an autonomic province of Italy. The residence, which is generally orientated east and westwards, is separated into four storeys, whilst each one of the four apartments develops differently through and on these floors. These very individual arrangements of floor layouts, as well as the patchy positioning of openings and loggias find their common ground in the coherent exterior. Projected as a building of solid construction, it features a concrete bearing structure with an insulated plaster facade. Its monolithic and robust appearance is referring to some regional predominant porphyry stone, which is typically characterised by its reddish-brown colouration.

The prefiguration of this very stone was implemented to the facade by the use a high pigmented moulding plaster, marked above all by its organic fine-grain amount. The plaster was applied to the surfaces by employing rollers, furthermore it was polished afterwards to create a deliberate three-dimensional appearance and visual depth of the surface. The optical impression of the building is therefore likely to change in the course of the day and the actual daylight situation, where the homogenous exterior appeals respectively different and nuanced. In terms of colour, the aligned louvered metal blinds fit, in closed condition of the building, apparently seamless into the openings and underscores therefore the objects homogeneity. All metal surfaces at the facade have exclusively been powder-coated with the same reddish-brown colour hue. Every apartment has, hence its geographical location near the alps and the therefore rough climate in this region, also sheltered exteriors, in the shape of loggias or recessed balconies.

The porphyry-red facade generates a physical context and represents the interface between the roughness of the surrounding coarse-grained boundary wall of the site and also the smooth and anodised surface of the window frames an shutter blinds. While the facade was realised in a notable structured style, which benefits from the massive body of the residence, surfaces at the interior on the other hand are much contrasting this with a favoured smoother visual effect.

A cosy and comfortable interior climate is provided by an ecological insulation, as well as insulating glass with thermal-segregated window profiles and automatic ventilation with an energy recovery system.In terms of sustainability and energy-efficiency, the building was awarded by the Casa Clima Agency with the low energy Casa Clima A class certification. Casa Clima buildings exhibit optimised construction methods, careful execution and a high level of comfort.Buildings with a heat consumption of less than 30 kilowatt-hours per square metre annually receive Casa Clima A classification, and are also called “three-litre” buildings for their theoretically energy consumption of 3 litres of oil.