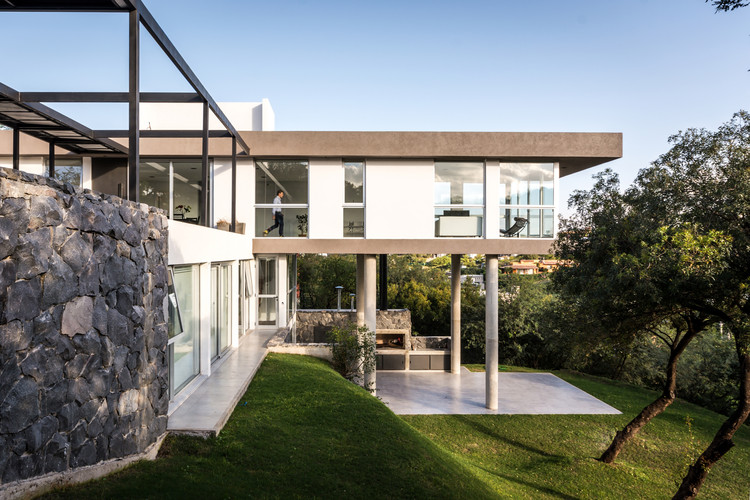 Text description provided by the architects. 367 house was designed over the highest point of the lot, which is steep and has a big area. The lot is located in the city of Mendiolaza and the intervetion seeks to enhance the views to the mountains and also to the city of Cordoba. The idea consist of two juxtaposed rectangular prisms, getting as result a house with an "L" shape.

In one of the volumes is where social life happens, it has an open plan and a big transparent area which face north. It flies over the site integrating itself to the landscape. Structurally it is solved by four concrete columns and inverted beams of big dimensions in order to achieve that four meters cantilever, which creates a double height space over the main courtyard.

The other volume, which contains the "private activities" is semi buried and made of stone and glass, it dialogues directly with the landscape. The rooftop of it, is used as expansion of the social sector and also to save two cars when not in use. The main entry it´s also here, which is protected by a light metalic structure.

The vertical circulation is solved by a stairs in the intersection of the two volumes, made of wood and concrete. The convination of open, partially covered and covered spaces plus double heights make this house flexible, fluid and in constant contact with the enviroment. 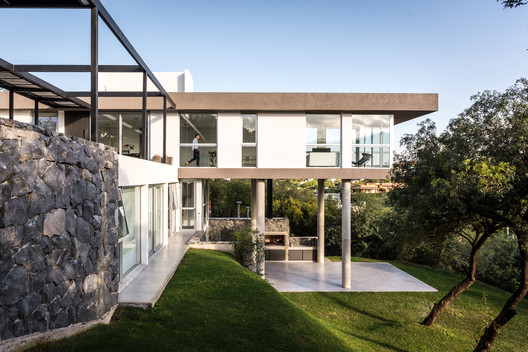