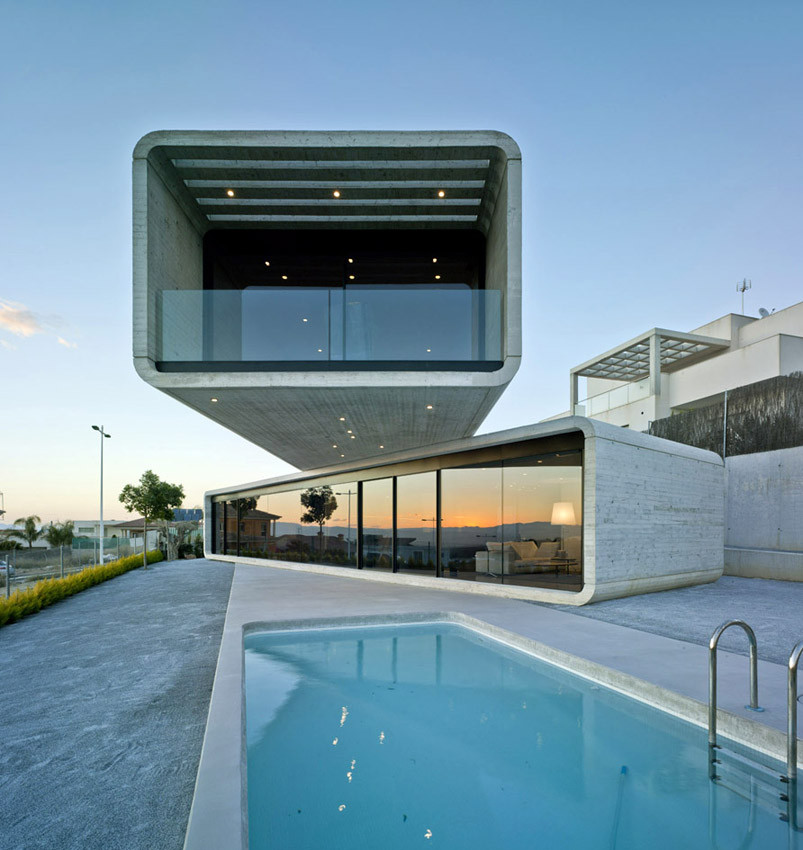 Text description provided by the architects. On a site in the higher part of a residential zone in the environs of Murcia is located the singular, crossed house with views to the adjacent mountains, the "Sierra de la Pila" and "Valle del Ricote". From the ambiguity, being on a site of a future densely built-up area and at the same time enjoying today’s unsurpassable views, was born the idea of the project: to orientate the lower level of the house to the garden's intimacy and grant to the user at the superior level the delight of its views considering future edification and the influence of solar radiation.

This conceptual setup is materialized by a geometrical operation, the rotation of two elements, as if it were two construction toy blocks that are stacked and handled easily. The stacked oblong volumes, of a length of 20m and a depth of about 5m, are rotated by 35 degrees so that the extremes orientate to the most favored views and generate at the same time cantilevers of about 10m length.

These cantilevers, together with the rotation between both volumes, provide the necessary sun protection of the facade and pool residence.

The expressive power of this formal configuration, very elementary in principle, is further enhanced by a subtle distinction between the two volumes: the edges are rounded according to the orientation of the main openings of each level reinforcing this way the autonomous nature of the volumes. Thus, on the ground floor rounded transversal edges frame the big opening to the southeast, upstairs such treatment is applied to the longitudinal edges framing the views of the rooms at each end of the volume. This also apparently reduces the contact surface between the two stacked volumes and reinforces the oblong nature of their geometrical form.

The contact to the ground is solved using again the same mechanism of rotation. This time a third, buried volume corresponding to the pool deck rotates with respect to the two volumes of the house to resolve the transition between garden ground and dwelling.

The surface's treatment of the concrete volumes provides a contrast between the outside with a rough finish created by a shuttering of sand blasted pine strips and an interior of smooth finishes. 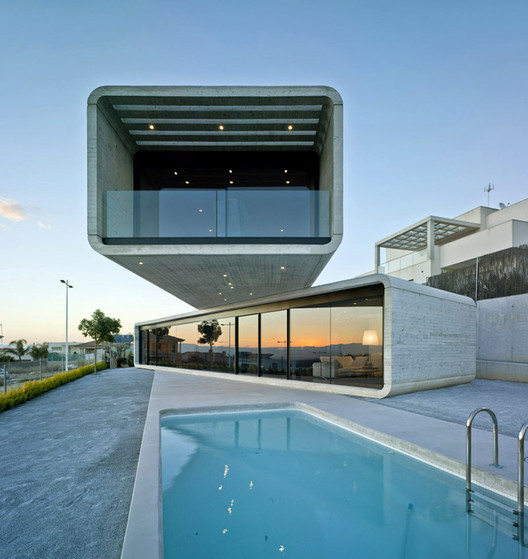