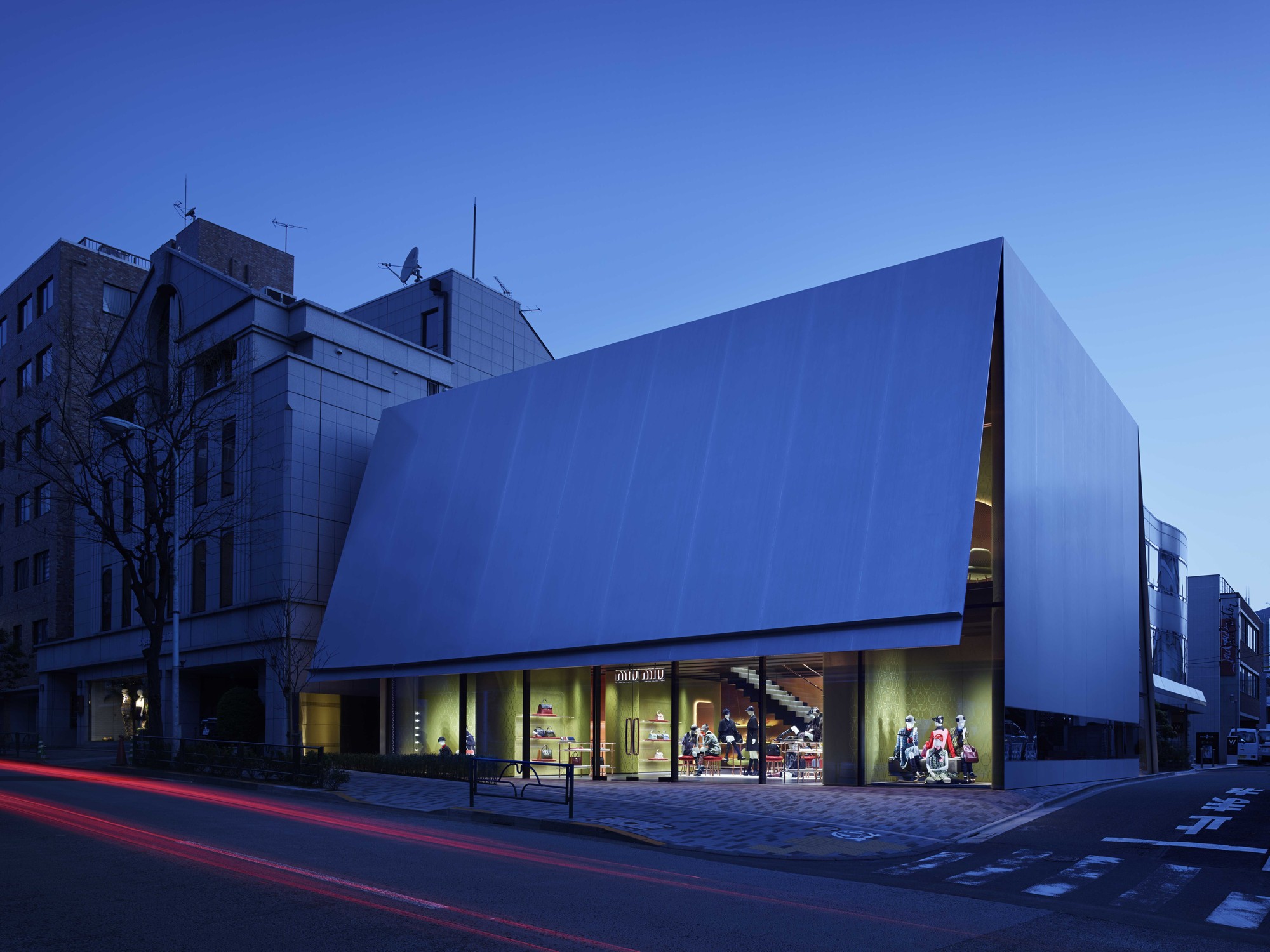 Text description provided by the architects. The project for Miu Miu is sited diagonally across the street from the celebrated Prada Tokyo Epicenter – also designed by Herzog & de Meuron – in an elegant neighborhood that has, over the past two decades, become a showplace of architectural invention. In contrast to the transparency of the all-glass Prada building, however, the understated metallic surface of the Miu Miu façade is opaque, which lends a more intimate quality. The architects say: “Contrary to expectations for a site that is home to so many luxury brands, Miyuki Street in Aoyama Tokyo is not particularly beautiful or elegant. The architecture is heterogeneous – a hodgepodge of freestanding buildings of different heights and shapes, with neither historical tradition nor common standards. Never meant to be a space of its own, the street is a purely technical and functional link between Omotesando and the Aoyama Reien cemetery farther down the road. Despite single trees here and there, the atmosphere is not inviting, like a boulevard or a plaza. Tokyo is pure, quintessential city, its territory exploited to the full with absolutely no leeway for the individuality that we take for granted in European cities.

We already noticed this over 10 years ago when we were planning the glass building for Prada Aoyama. At that time, we were interested in counteracting the situation – on one hand, by placing a small plaza to the side of the building, and on the other, by making the structure completely see-through so that one can see into the interior from all sides and can also look out from inside at specifically targeted views of the city.

Over the past decade, the distinctive building has become a much-frequented location and it was therefore important to Prada, our client Prada Japan and also to us as architects to take this into account in planning the Miu Miu store located in the immediate vicinity on the opposite side of the street. We started out by trying several different architectural typologies. Since zoning regulations called for less height, we explored the potential of a smaller, more intimate building. We used the following thoughts to channel our ideas: more like a home than a department store, more hidden than open, more understated than extravagant, more opaque than transparent.

The typological model that best suited these considerations and specifications was a box placed directly at the level of the street, its cover slightly open to mark the entrance and allow pedestrians to look inside. Only then do they realize that the building is a shop. Here, under the oversized canopy, the two-storey interior is visible at a single glance, as if the volume had been sliced open with a big knife, turning the inside out. The rounded, soft edges of the copper surfaces inside meet with the razor-sharp steel corners on the outside of the metal box, while the cave-like niches clad in brocade face the central space of the shop like loges in a theatre. The shop on two tall storeys not only presents enticing goods on tables and in display cases; it is also like a spacious and comfortable home with inviting sofas and armchairs.

The façade has neither logo nor pomp; it is a polished, mirror-smooth surface, as if one single giant brushstroke had swept smooth the ordinarily matte surface of the steel panelled façade. This surface attracts the gaze and curiosity of passing pedestrians. But instead of affording a view inside, as in a shop window, the gaze is inverted; instead of the anticipated see-through window, viewers encounter self-reflection.

While the street is not a place that encourages lingering and looking around, the building itself is a gesture that extends an invitation to come inside and stay a while.” 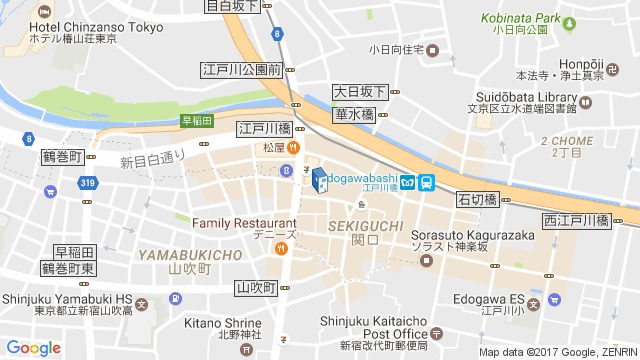 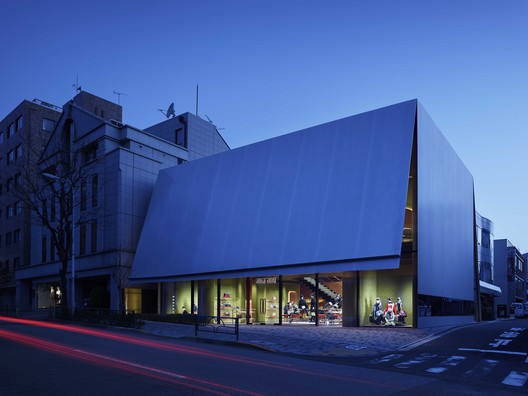