Update: As many readers guessed, this story is of course a prank for April Fools' day. Thanks to everyone who played along, and a particular thanks to the seven readers (we won't name any names!) who were convinced enough to email their expressions of interest. Your optimism and ambition are admirable, and we're glad that you were able to take the joke in good humor. To anyone who dared to believe this story and had their heart broken: we're sorry!

Last week, a little-known charity known as the Society for Atheistic Spirituality (SAS) announced a proposal which is sure to put them very much on the map: they plan to build Etienne-Louis Boullée's design for a Cenotaph for Newton. The cenotaph, designed in the late 18th century as part of Boullée's Architecture, essai sur l’art, is a sublime homage to the enlightenment thinking of Sir Isaac Newton, making it a perfect fit for the Society for Atheistic Spirituality's mission to "endorse a rational understanding of our universe without abandoning the sense of wonder that makes life worth living."

Though the plans are very much in their early stages - and in spite of the fact that the cenotaph was never really designed to be built in real life - the society is serious about their proposal, having earmarked a $500 million donation from a single donor, and are working to establish a "world class" team to realize the design. To find out more about their plan, ArchDaily spoke exclusively to the society's director Zara Thustra, their construction projects leader Sidney Syfus, and their half-billion dollar donor, Dr Pang Luz. Read on after the break for the full interview. 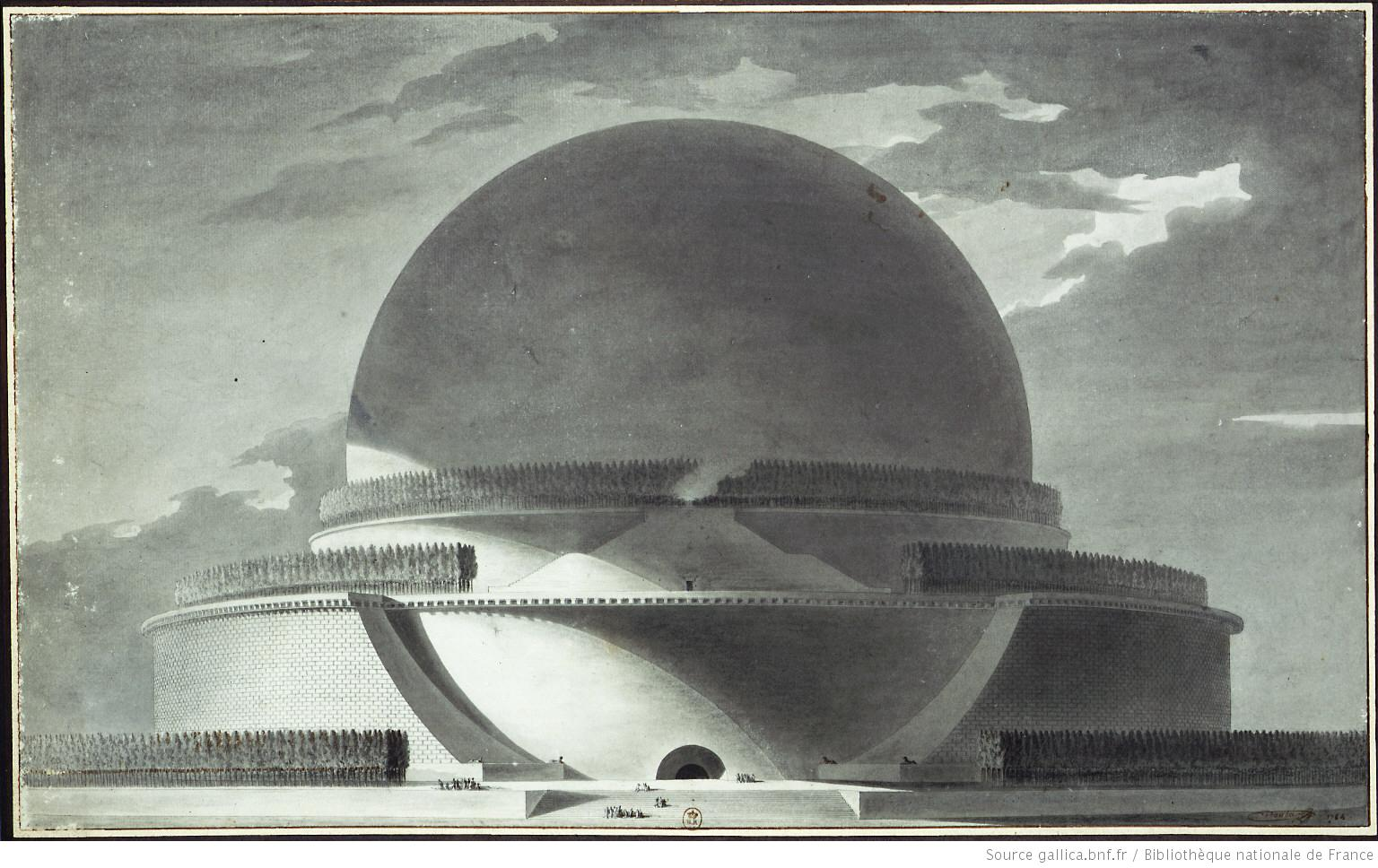 ArchDaily: The Cenotaph for Newton is certainly an ambitious project - but the Society for Atheistic Spirituality isn't exactly a proven player in constructing world-renowned buildings. Can you tell us more about your organization?

Zara Thustra: You're right! SAS has existed for a little over ten years now - I founded it in 2004 - and we've always been pretty small. Right now we only have three permanent staff: myself, Sid, and our community advocacy manager Antoine. Until now, we've been mostly involved in advocacy, and we've worked on a few small construction projects - mostly consulting on "spirituality rooms" in hospitals, which are intended to be a non-religious alternative to the traditional chapel for patients and family members who are going through difficult times but don't have a personal god to turn to.

But Dr Pang's hugely generous donation has changed all of that. I expect we will need to take on a dedicated team to help realize this project, which will be headed up by Sid. It will be a challenge for sure, but we think we're ready for it.

ArchDaily: Can you tell us a little about how the idea to build the Cenotaph came about?

Zara Thustra: It was about two years ago, I was a consultant on a spirituality room at a hospital in Japan. I was visiting the project, and I happened to meet Dr Pang, and we had a chat about...

Dr Pang Luz: A chat! You always make it sound so boring. Let me tell you how it happened from my perspective.

I've been incredibly fortunate throughout my life, and a few years ago I was starting to think about giving back to society, making donations. I've never really been religious, but I saw the good that a religious outlook can do for many people, so my plan at the time was to split my donations about halfway between religious organizations and humanitarian charities. Right about that time, I was diagnosed with a life-threatening illness, and had to travel to Japan for treatment.

It was a very difficult time for me, but all was for the best I suppose: it was there that I met Zara and our discussion really changed my life. I realized that their approach to non-religious spirituality was exactly what I had been missing. After I got over my illness, I decided to donate all the money I had set aside to the Society for Atheistic Spirituality.

Zara Thustra: He phoned me in January and told me he would like to make a donation for a construction project. I still remember the conversation word-for-word. He asked me what my dream construction project would be for SAS, and I said I've always wanted to build a dedicated building along the lines of our spirituality rooms, something that could hold a congregation of sorts. He said "is that all?" and I replied "why, how much money do you have?" When he said 500 million dollars my jaw hit the floor! [laughs]

The Cenotaph was actually Sid's idea; she studied architecture so I had to go to her for ideas that were a bit more ambitious than my own.

ArchDaily: But why the Cenotaph for Newton in particular?

Sidney Syfus: I've always thought that it can be difficult to design a spiritual place, especially without using any allusions to religion. So with half a billion dollars at stake, I didn't want to suggest a new design that might fail at its task. I thought the Cenotaph was perfect because, even though it was never built, its design is so powerful that people get a sense of sublimity and wonder just from viewing the drawings. Choosing the Cenotaph was really just a way to ensure that we got the best value for money on what will be our organization's biggest investment by far.

ArchDaily: The money you have for this project is obviously a lot, but Boullée's design was really intended to be outside the realms of reality, and it's not uncommon to see buildings these days with budgets much higher than yours. How sure are you that this is possible?

Sidney Syfus: It will be a challenge, I'm aware of that. But I think there are some aspects to Boullée's design that make it well-suited to this budget. Firstly, Boullée was working in a time before reinforced concrete was invented, so I expect this technological development will greatly improve the design's feasibility. Secondly, the size of the Cenotaph was designed to be completely beyond the human scale. The central sphere of the original design was 150 meters across, and we've discussed whether it would be possible to scale the design's size down a little - say, to 100 meters - and still keep the same sense of that colossal space. Obviously plan A is to build it at full size, but we feel there's the possibility, if we need it, to save a lot of money by scaling it down just a little. Finally, Boullée's design is ambiguous when it comes to materials; the design's effect comes from its form and its size, so I expect the materials themselves could be done without blowing the budget.

ArchDaily: Are you implying that the building will be a 150 meter high brutalist concrete building with no windows?

Sidney Syfus: [laughs] I don't know yet! I have an idea about how this might work, but I'm not a fully qualified architect. That's one of our next priorities, assembling a world-class team of designers and engineers that has the ability to pull this off. Also I think it's important to remember that this building was designed to be experienced from the inside. We're hoping to find a site in the countryside too, so that the Cenotaph will be something of a pilgrimage site, and so that its existence doesn't negatively impact any urban citizens.

ArchDaily: So you don't have a site yet?

Sidney Syfus: We don't even have a country yet. We're trying to open up some talks with a few different countries - places where the population might be receptive to this idea and the authorities are interested in enabling such a bold idea.

Zara Thustra: We're at the start of a very long process. I mean, really all we have right now is a dream and the money to make it happen.

Dr Pang Luz: And a beneficiary who believes one hundred percent in your plan, don't forget...

The Society for Atheistic Spirituality is currently taking expressions of interest from architects and engineers who would like to be involved in the design. Interested parties should email atheisticspirituality@gmail.com asking to be included on their mailing list.