Australian firm HASSELL has been announced as the winner of an international design competition for 60 Martin Place, an office tower at the heart of the city's business precinct. The "environmentally sound" tower will replace an existing 1970s complex slated for demolition in early 2016, with construction anticipated to commence in early 2019. 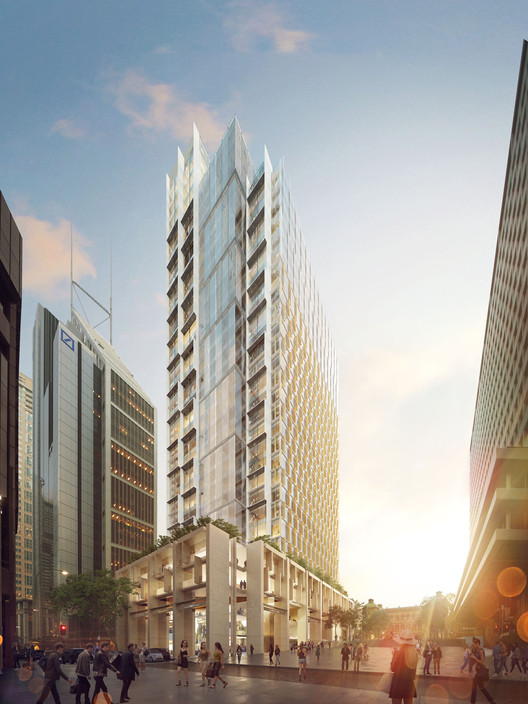 Maximizing its prominent corner location at the junction of two major city roads, the tower will overlook the eponymous Martin Place, and offer views of the Sydney Opera House, Royal Botanic Gardens, and Sydney Harbor. On completion, 32 stories will create over 40,000-square-meters of leasable office space for up to three anchor tenants and multiple smaller lessees.

60 Martin Place responds to its heritage surroundings and the burgeoning corporate side of Sydney with equal sensitivity. At street level, sandstone blades recede into the tower, referencing nearby colonial facades and the neighboring historic St Stephen's Uniting Church.

Above, a glass facade soars fluidly skyward, the North facade curving outwards as the building rises to give the towers its distinctive form. Using the latest in sustainable materials and building technology, the tower will achieve a 6-Star Green Star Office Rating and a minimum 5 Star NABERS Energy Rating.

The ground and lower levels of the tower are oriented towards increasing connectivity between Martin Place and adjacent Macquarie Street, and allow public access to indoor and outdoor cafes. This focus on civic life is reflected in the upper levels of the development, where rooftop bars, restaurants, and an event space are to be nestled alongside office spaces.

"The design will deliver a balance of social, cultural an economic value to Sydney and its people," said Tony Grist, Head of Design in Architecture at HASSELL, and design team leader of the 60 Martin Place Project.

The announcement comes following an international design competition involving HASSELL and five other teams, in which firms were tasked with meeting architectural demands alongside conforming to commercial and urban design parameters.