Save
Arquitetas Invisíveis Presents 48 Women in Architecture: Part 1, the Pioneers
Share
Or
Copy

International Women’s Day, now celebrated on March 8, was first commemorated in the early 1900s, as women across the globe were actively campaigning and protesting for equal rights. What began as small protests, rose to a global scale and trigged over a period of time a series of political, labor and social advancements for women. Unfortunately, these achievements do not always guarantee gender equality in practice (and in some countries laws still exist that favor men). Women still suffer from physical and psychological violence, lower salaries, and a lack of recognition, among other things. While this is the situation for women around the world, there are also specific statistics that show how women in architecture are not valued socially and professionally. There are few women who gain international recognition, making them unknown to many professionals and architecture students, and making it seem as if they do not exist.

To celebrate International Women’s Day, we asked the Brazilian non-profit group Arquitetas Invisíveis (Invisible Architects) to share with us a part of their work, which identifies and recognizes the work of women in architecture and urbanism. The result is this list of 48 women divided into seven categories: pioneers, “in the shadows,” architecture, landscape architecture, social architecture, urbanism and sustainable architecture.

The project Arquitetas Invisíveis, which this March 8 celebrates its one year anniversary, was started when the founders had trouble believing that women's participation in architecture in the 20th century was so low. After researching they found that there are in fact a lot of women architects who have been involved in important projects, they just haven't gained as much international attention.

The aim of this project by Arquitetas Invisíveis is to present, promote and honor the work of these great professionals as well as to raise the question: why do many of these women continue to be invisible? And, how can we change this?

In this first part we present the first of the seven categories: the Pioneers. 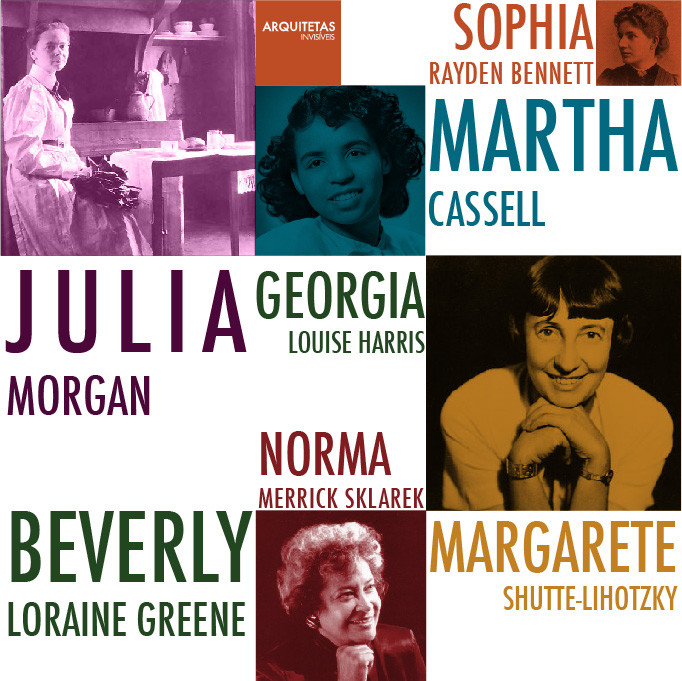 Pioneers in the field of architecture, these women started breaking barriers previously thought to be impossbile to break through. Combatitive and determined, they were among those who made it possible for women to have a presence in architecture at a time when the culture was deeply patriarchal. Among these women is Julia Morgan, who in 1904 became the first woman licensed to work in architecture, which represented a very important milestone for the history of the profession. Previously, architects like Sophia Hayden Bennet, who became an architect in 1890, suffered from so much discrimination that she basically couldn’t work (and when she finally could she received less than a tenth of the salary of her male counterparts). Martha Cassell, Norma Merrick Sklarek, Georgia Louise Harris and Beverly Lorraine Greene were also pioneers in the face of racial prejudice in the profession. These four black women shaped the course of the architecture profession, representing the various dimensions that sexism can take, and they were the first to seek recognition and respect from a profession that was essentially patriarchal. Finally, Margarete Shutte-Lhotzky, better known as Gret, was responsible for the iconic Frankfurt kitchen design in addition to several other projects. But frustrated with only being associated with the kitchen, Gret said: “If I knew that this was the only thing everyone was going to talk about I never would have made the damn thing.”

American architect born in 1915. She was the first black woman to study architecture at the University of Illinois. She passed away in 1957 at the age of 42.

American architect born in 1918. She worked with Mies van der Rohe on structural projects and also helped with the Ibirapuera park project in São Paulo, Brazil. Her career was marked by episodes of racism and sexism, and because of this prejudice she moved to Brazil in 1954, where she founded her own practice. She died in 1999 at the age of 81.

American architect and engineer born in 1872. She opened her own firm in 1904, making her the first licensed woman to work as an architect. With a focus on residential architecture, she completed more than 700 projects before her retirement in 1951. She was the first woman to recieve the AIA Gold Medal, awarded for her impact on a generation of architects. She died in 1957 at the age of 85.

* See also: The Indicator: What the Julia Morgan AIA Gold Medal Says about Equality in Architecture

American Architect born in 1925. She worked on Washington’s National Cathedral and died in 1968 at the age of 43.

Architect born in Chile in 1868 to a Peruvian mother and American father. She was the first woman to graduate from to the school of architecture at MIT. She died in 1953 at the age of 85.

Austrian architect born in 1897. She designed houses in Vienna and Bulgaria, worked with schools in the USSR and served in China and Cuba, in addition to her involvement in designing furniture. She was persecuted by the Nazis and exiled in Turkey. Gret became known for the design of 11 thousand Frankfurt Kitchens. Historically (and to her dismay) all the work that she developed was reduced to her work on the kitchen: “If I would have known that everybody would only speak about that, I wouldn’t have made that damned kitchen.” She passed away in 2000 at the age of 102.

"We are very honored to help promote the work of these 48 women architects on March 8. We know that there are many other inspiring professionals around the world, and we are looking to generate more recognition and knowledge of their accomplishments in order to fight discouraging statistics, prejudice and violence and in search of the same working conditions for women as men. This is the beginning of a long journey for the Arquitetas Invisíveis project and we like to share information on this project as well as other initiatives through our fan page.

We hope that today can be more than just a day of tributes and that it can bring reflections and discussions and help us towards a more just society. The Arquitetas Invisíveis would like to wish you a happy Women’s Day!"

During this coming week we will be presenting the architects of the other six categories.