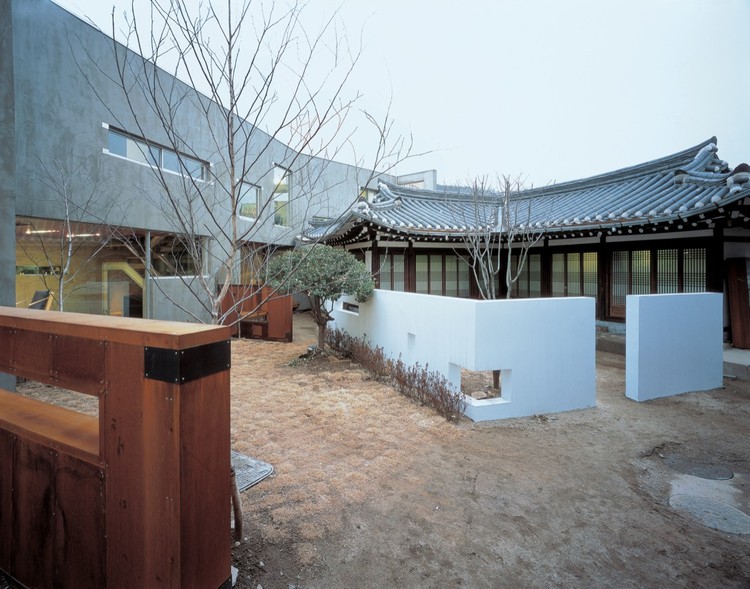 Text description provided by the architects. Coexisting of old & new – Addition of the new modern house on the site where is existing traditional old house

The owner of house is born in Korean-style house and grows up in this land, as well as, the village is a place with ancestral burial ground. The place is the origin of life for him and a place where the trace and remembrance of life is compressed.

Now he, who composed a household of family, came back to the land and build up the land of life for three generations with his mother who kept the site until now. He is a broadcasting writer.

The architectural method to connect the retention of the existing traditional house with vertically extended new house in a site. It faces difficult problem of present age that coexistence and harmony of 'tradition and modern'.

A pond snail lays young in its' skin in the peel and the young grows up eating the skin of mother. If the young all grows up, the mother left only with 'peel'. It is an instinctive devotion to inherit the life. Also, it is a 'virtue' that is a destiny of life.

Maybe he tried to realize the virtue of pond snail in the site where ancestors' devote is piled. It is tried to build a 'layer' only as a 'peel'.

The architectural “wall” only as a “peel”

An architectural 'wall' only as a 'peel' is built and the wall endowed with a role to mean an idea of time. The 'oldness' of Cor-Ten Steel is an instinctive peel. The wall and the wall of exposed concrete are an 'inner skin' of past story as well as a peel of sometime in the past. The walls with symbolic time, divide the site into 'garden' of ten 'places' the site and each garden, as a land where records the history will latent another program of future life. And the connection of garden and the story of garden are expected to show plentiful spatial drama and story of life.

To function as “landscape of memory”

With the existing Korean-style house as the central figure, the composing element like outer wall, inside fence, outside fence of every space built a 'wall' that only has simple 'side' as a 'form' With this, the Korean-style house is symbolically embossed from every direction, and become an object. It will function as 'landscape of memory' to the residence and the visitors of the house.

The urban landscape of high-storied office building in Bundang new town with background of tiled roof on the Korean-style house that looks down from the second floor makes to feel the mystery dissonant harmony and difference of periodical character of culture. Moreover, the firmness of cumulated time may be a reason that the grandeur of the small tiled house could see.

To be the “Fence of old house” – Making the various gardens.

The new residential mass is long arranged surrounding the Korean-style house. With this, the mass is being a fence of outside. Moreover, it could form an outside space between the existing Korean-style houses.

Gardens and walls of periodical character

The outside space divided by function and region, and became a 'place' where characterized with 'gardens' which is composed with 'wall' that has periodical character.

After all 'wall plan' as an architectural device to put new story of time and 'preservation of land' as a 'place' where has the history of time became the intended aim of the house.

Firmness of the ‘peels’ and 'spirit of time'

During the construction, the existing houses simultaneously changed to a portly frame and the shape that cultural origin is ambiguous. And then, they besieged the house.

It was the moment that the Cor-Ten steel outer wall is filled with the meaning of time. Nevertheless, what is the reason to be seen the house, which seized by public house district around, as if it is a commander that leads them.

Maybe it is because the firmness of the 'peels' that are piled by the people who lived this land and condensed 'spirit of time' for a long time... 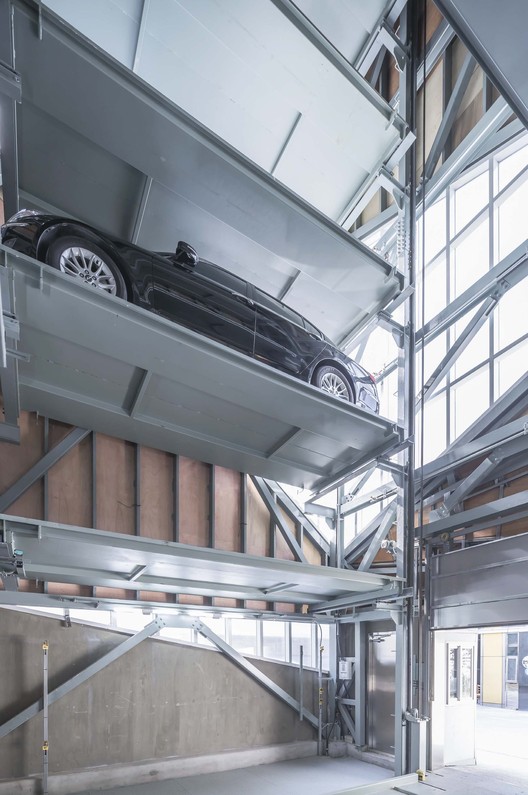