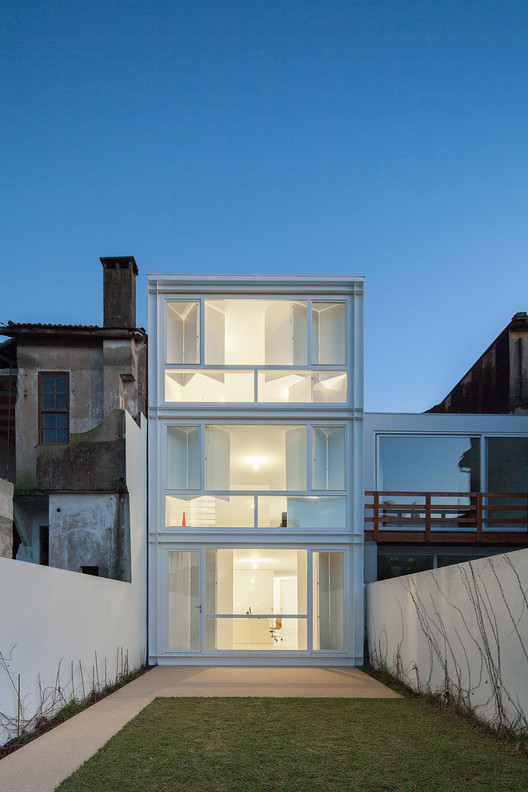 Text description provided by the architects. The House is located in the Rua do Lindo Vale, in the city of Porto. It is a row-house, 3 stories high, built on a plot of 5 m width and 40 m length. This building has four fundamental characteristics. The first is that the architects are also the clients of this project. The design of the Architect’s House is, undoubtedly, a unique challenge within the design of the House, as an architectural programme, due to the coincidence between the ‘architect’ and the ‘client’, and due to the possibility of the spatial realization of the architect’s own residential experience.

The second characteristic is the sound sense of urbanity of this House. This is not a house built in the periphery of the city, in a plot of medium- or large-size, but a House erected in the central area of the city, an area with an intense urban life, in a long and narrow plot that raises a number of spatial constraints. Based on the regulations of the plan in force, for a building to be erected on this plot it should maintain the alignment of adjacent buildings, a maximum height inferior to the width of the street, and a high permeability in the back of the plot. The definition of this volume (by the regulations of the plan) led to an interior organization of the dwelling that is, somehow, similar to the inner structure of the typical houses of Porto – two lit rooms near the two façades of the house and a third non lit room in the core of the house. The staircase is located in this core. In each floor, the third room corresponds to: the library (which is opened to the office) and the bathroom in the ground floor; the kitchen (which is opened to the dining and living rooms) on the first floor; and a patio in the second floor.

The third characteristic is the simplicity of design and materials. The integration of this House within the existing buildings is based, in a first moment, on a careful volumetric articulation and, second, on the simplicity of design of the front and rear façades – the structure, the door and windows, and the gate – reinforced by the use of one single color. Inside the house this simplicity continues: in an interior organization layout that is very similar in all floors; in the search for ‘true’ in construction; and in a spatial continuity between the three floors, which is enhanced by the design of the stair and of the vertical movement. This simplicity is also underlined by the use of a restricted range of materials in all rooms, including both the kitchen and the bathrooms: walls and ceilings are painted white, pavements are of beige vinyl floor, and wooden doors are painted white.

Finally, the House is very flexible. The repeated use of a set of very simple elements introduced a great versatility in the day-to-day living of the House: i) each window, on the front and rear façades, has two sets of shutters – one set positioned between 0 and 0.90m high, and another set positioned between 0.90 m and 2.65 m high; ii) all rooms, except the bathrooms, have sliding doors that can be fully collected by the interior walls allowing, as such, a smoothness movement between different rooms.

The House in the Rua do Lindo Vale is clearly an urban house belonging to ‘that’ particular place. It is the spatial expression of the residential experience of their architects; erected on a great simplicity of design and materials, achieving its high quality through a rigorous sense of construction and a high spatial versatility.