Save
House with One Wall / Christian Kerez 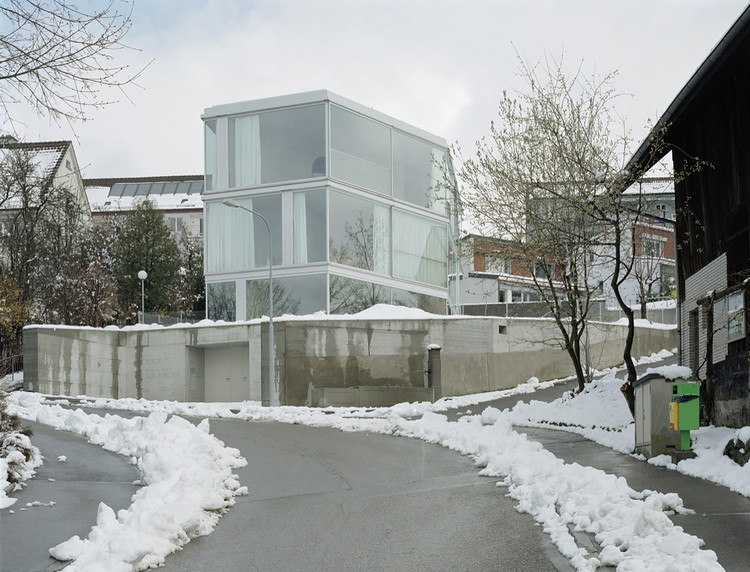 Text description provided by the architects. A two-family house is a building with a wall that divides it into two halves. The dividing wall is the only wall in the entire house. It cannot be crossed anywhere. It has to fulfil functions conventionally assigned to several architectural elements. It is the loadbearing structure and the installation core, its folds define all of the rooms and it determines how the view from the entirely glazed building is divided between the two living units.

The simplicity of the concept, the reduction of the architecture to a single element, creates substantial dependence and, in turn, makes the building very complex. It is only through that dependence that the wall acquires a compelling and cogent character although, in itself, it can follow any chosen course.

The wall between the two units has folds in it so that it will not fall over, like folding a piece of paper so that it can stand on end. The folds are different from floor to floor. One room is concave, another convex. One room is open plan, another has sections. The shape of the wall is reversed in each of the flats – on one side a protruding bend, on the other a niche; on one side a wide space, on the other a narrow one.

Every storey consists of one long room. Despite limited floor space, the elongated rooms seem spacious. They are expansive in an extremely economic way. That explains why the building looks much smaller from the outside than from the inside. There is only one area in the entire house that is completely closed off: the bathroom. But it too emerges from the logic of the folded wall. The room-height sliding door of the built-in wardrobe placed in front of it is a continuation of the wall slice. Neither wardrobe nor bathroom interrupts the progress of the wall; instead they expand and multiply it.

The walls, their placement varying from floor to floor, are linked by stairs that lead through the entire depth and height of the house from one end to the other. The cascading staircase is the final and perhaps most important attempt to wrest spatial clarity and expansiveness from  a very ordinary brief and a restricted plot of land. 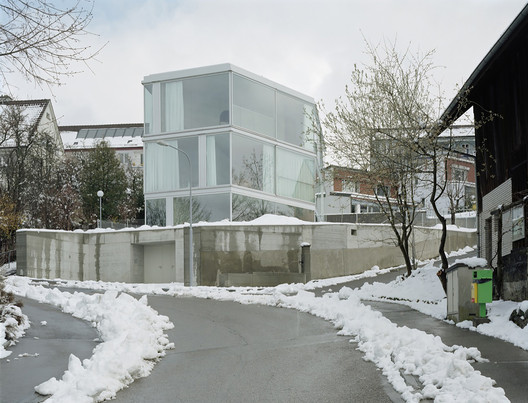