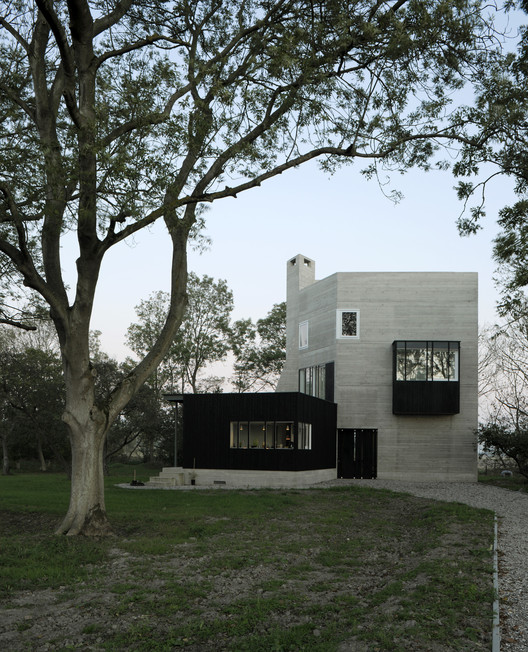 Text description provided by the architects. The brief was to design a house for a single man, a house fitting like a tailored suit. He had acquired the building plot in the region where he was born after a nomadic professional life. We were given permission to place the house on another location on the site but could not exceed the volume of the existing farm house at the street side (850 m3) which we demolished. Since the client moved into the house some 4 years ago, he has become the father of two children and his library on the second floor has been re-thought as the children’s bedroom.

The shape of the building is the consequence of an extensive geometric exercise by the architect, Ms. Marie-José Van Hee.

Placing the house at the back of the terrain, she wanted to incorporate views of the orchard and as such it was also possible to orient the ground floor towards the south, embracing the apple trees.

While some of the - more urban - designs of Ms. Van Hee are built around patios, by contrast in this design the Y–shape of the house allows for the terrain to enter from three sides. The centrally placed hearth and chimney divide the dining from seating area on the ground floor and forms the „spine" to which the first and second floor are attached. Also here the geometrical intent was the basis for the sculptured chimney. The height of the concrete volume (about 12 metres above the ground level) was a response to the presence of the only other building on the site, an 18th century barn with an impressive roof.

We also sought to have the building correspond in material to the nearby coast (3km away) and thus looked for a concrete, bright in color referring to the sandy beaches. In addition, concrete was an apt material to build the 4 storey volume plus basement. This led us to the use of Portland cement, quarried on the Dorset coast on the other side of the English Channel.  The finished surface of the concrete was formed by horizontally placed wooden plank shuttering. The same language was repeated in the vertically placed, blackened wooden planks that finish the walls and carpentry. The black-and-white stained carpentry directly references the local vernacular. 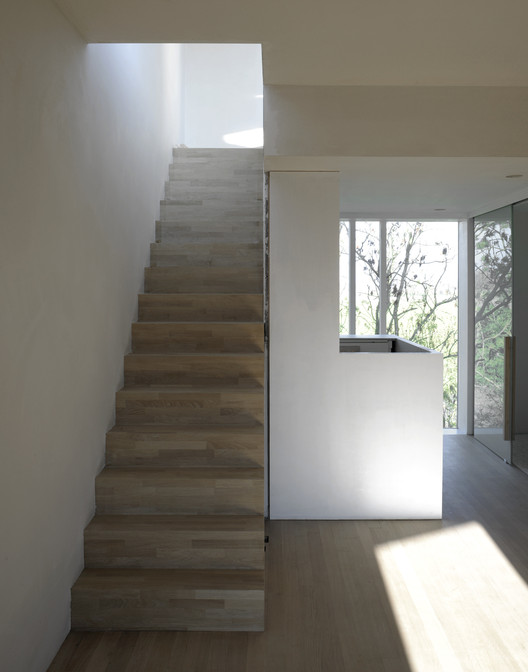