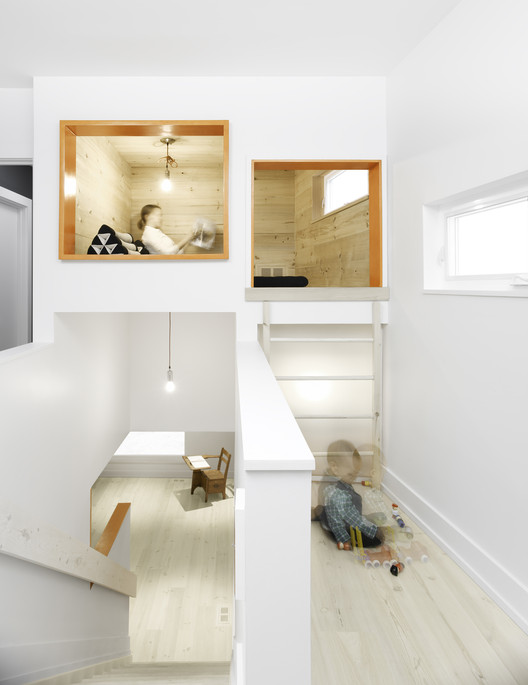 Text description provided by the architects. Background: Located in Westboro, an urban neighbourhood close to the Ottawa river, the house sits on the site of one of the original cottages built in the early 1900s when the area was still used for logging. When the current owners bought the property in 2009, they originally had the intention of expanding the 800 square foot house with a second storey addition, but a closer investigation of the foundation and interior structure revealed that the initial structure had deteriorated significantly over the years and could not be preserved.

Due to the desirable location of the property, rather than looking for a larger house in another neighbourhood, the residents opted to demolish the existing structure and build a new house on the site. To conform to strict zoning requirements, the footprint of the original house was maintained, but the interior space was re-organized to enable the house to serve a private residence, with the flexibility to accommodate a home business.

Massing:  The metal cladding draws inspiration from the many rural barns which dot the landscape just outside the city core. The industrial material is lightweight, durable and recyclable. The exterior's monochromatic color selection helps demarcate the footprint of the original house and the new additions. The white massing 'ghosts' the original outline of the house while the black portions highlight the new additions that are inserted into the white base.

The new second floor addition was conceived as a 'pod' that floats above the ground. It is supported independently from the base of the house by recycled steel columns. The southern portion of the 'pod' tapers out on an eight degree angle from the original house. The angled portion of the cantilever runs parallel to the property line and takes advantage of the air rights of the house to maximize living space while conforming with zoning by-laws. Although the cantilever could continue further into the backyard it cuts back towards the rear of the house in order to preserve two mature cedars located in the rear of the residence.

Materials + Color: To recognize the strong ties to the original Ottawa Valley lumber trade, pine boards cut from reclaimed logs from the Ottawa River were used to floor the entire house. The use of a white wash finish on the floors provides a brightness throughout the house. The bright and neutral pallet continues with white walls and cabinetry. In contrast to the white walls is the 'core' of the house, painted charcoal grey. The core serves as a visual anchor that runs vertically through the centre of the residence.

The charcoal grey represents the connection that physically and visually blends the 'new' black additions to the 'old' white masses of the house. The core of the house acts as the nucleus, containing all the utilities (plumbing, HVAC, electrical). The central location enables the utilities to be distributed efficiently to all the levels of the house. Throughout the house, splashes of orange are seen, particularly within the living room stairwell. In addition to allowing more light into the stairwell, the orange cutouts also align with key views cut in the exterior walls.

Thresholds of Privacy: The decision was made to use stairs as a subtle way to recognize increasing zones of privacy throughout the house. This design strategy enables the house to maintain a feeling of openness while still creating a subtle delineation of program. As visitors ascend through the residence they are invited into increasingly private family spaces. The first threshold lies at the entry to the home where the visitor transitions from pedestrian to guest by stepping up from grade to the front door. With a small step up, the visitor is invited into the entrance level.

The entrance level houses the lobby, home office, powder room and dining room, which doubles as a meeting room for the home office. Sliding doors in the living room and dining room also help isolate the office area during business hours keeping the remainder of the house private. Sliders are used to promote openness and the flow of 'chi' through the house. When closed the sliding doors transform into chalkboards for the family's young son.

Personal guests of the family are invited to the next tier of the house, located just a few steps up from the entrance level and containing the kitchen and living room, offering an open and bright space for people to gather. A large rear deck connects the interior to the outside through a 14' glass door which folds away to create an open view to the backyard.

Open riser stairs in the living room create a privacy threshold to the second floor where the family's bedrooms are located. At the top of the stairs a small children's alcove was created from the space produced by the 8 degree cant. The space is a perfectly suited play area for the family's young child. At the end of the play alcove is a ladder that leads to the final tier of privacy, a small reading nook. This cozy space hidden above the stairwell offers a private hideaway for the residents to curl up with a good book.

East meets West: The multi-cultural family wanted to incorporate elements of feng shui into the house in subtle and creative ways. The number "8" has always been an auspicious number in Chinese culture. Phonetically the word "8" sounds like the word for prosperity. This theme of prosperity manifested itself throughout the house.