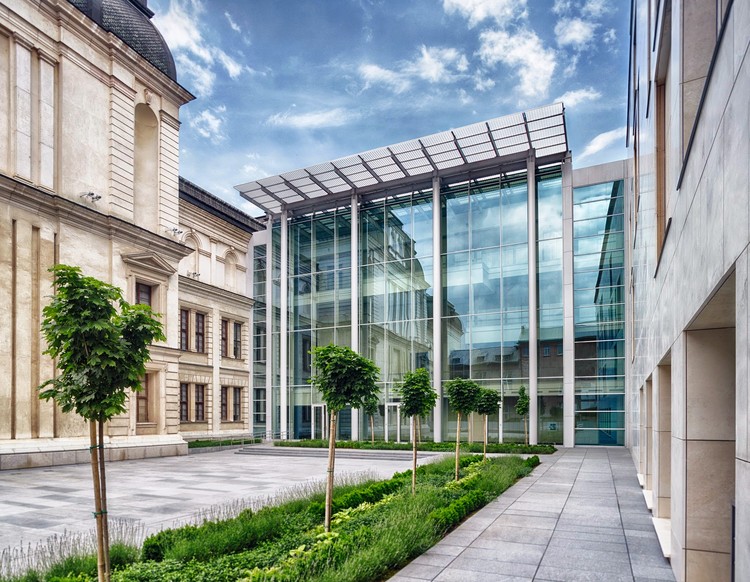 Text description provided by the architects. Following Bulgaria’s recent accession to the European Union, Phase I of the National Museum Complex in Sofia, comes at a time when Bulgarian society is undergoing a reevaluation of cultural values and is in great need of a new self-assured and positive identity.

The museum complex in the capital’s historic center is funded by the European Fund for Regional Redevelopment and will showcase the country’s two most important art collections - those of the National Art Gallery and the National Gallery for Foreign Art.

Located on Alexander Nevsky Square, the museum complex occupies a site of extraordinary history. Over the past century the cathedral square and the surrounding buildings have seen a number of transformations that have had a profound effect on the way the site relates to the city.

Alexander Nevski Square with the museum site in 1926.

In the late 19th century the three story building of the Royal Printing House framed the square to the east. Severely damaged at the end of WWII, the printing house was adapted first for the needs of the Technical University and later for the needs of the National Gallery for Foreign Art.

The buildings of the former Technical University (center) and the National Gallery for Foreign Art (far right), 2010.

The addition of the new wings of the Technical University in the 50’s and the subsequent adaptation of the Royal Printing House as the National Gallery for Foreign Art in the 80’s enclosed the site as a complete urban block.

By the mid 90’s reorganization of state institutions after communism’s collapse and the ensuing ownership uncertainty left the Technical University building and its interior courtyard as a decaying empty shell.

The courtyard before commencement of construction: previous site excavations and building in-fills had left the inner courtyard disconnected from the surrounding streets.

View from the former turbine hall of the university laboratories: despite the buildings’ dilapidated state the potential for creating a special connection between the museum galleries and the inner courtyard was apparent from the start.

In 2010 the final transformation of the urban block began with an international architectural competition organized by the Bulgarian Ministry of Culture to turn the site into a national museum of visual arts that brings together under one roof several centuries of Bulgarian, European, Asian and African art.

The winning competition entry by Yanko Apostolov and Museoplan drew on the site’s unique history and the potential of the existing courtyard to become a symbolic heart of the museum and a meeting place for the citizens and visitors of Sofia.

The once-lost inner court is now elevated to connect to the surrounding streets creating a new cultural public space – an open air sculpture garden that can be used for art installations and special public events.

Clad in the much used in the city Vratza limestone, the new building tissue completes the massing of the complex while maintaining the volumetric hierarchy established by the nearby Alexander Nevsky Cathedral and the roofline of the National Gallery for Foreign Art. Centered on important lines of sight, the renovated courtyard acts as an orientation device and a point of departure for the museum visitors.

A full spectrum of museum programs are organized around the open courtyard achieving optimum functional integration of art galleries, public spaces, administration offices, art storage and restoration labs. The new elevated ground plane acts as a horizon separating the public spaces and art galleries above from art storage and service spaces below.

The National Museum Complex contributes a valuable cultural venue to Sofia’s downtown. The project recovers a lost space in the public realm and charges it with new meaning - a place where art can start bringing new ideas into the daily lives of the citizens and visitors of Sofia.

Phase I and eventually Phase II (scheduled for construction in 2015) are two critical steps in a wider master plan to create a museum cluster that promotes synergy between the national collections and the historical city fabric. 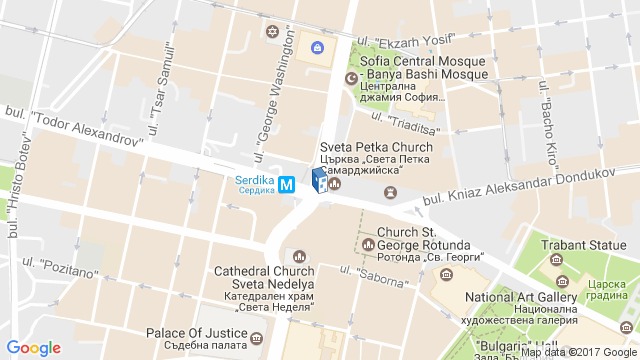