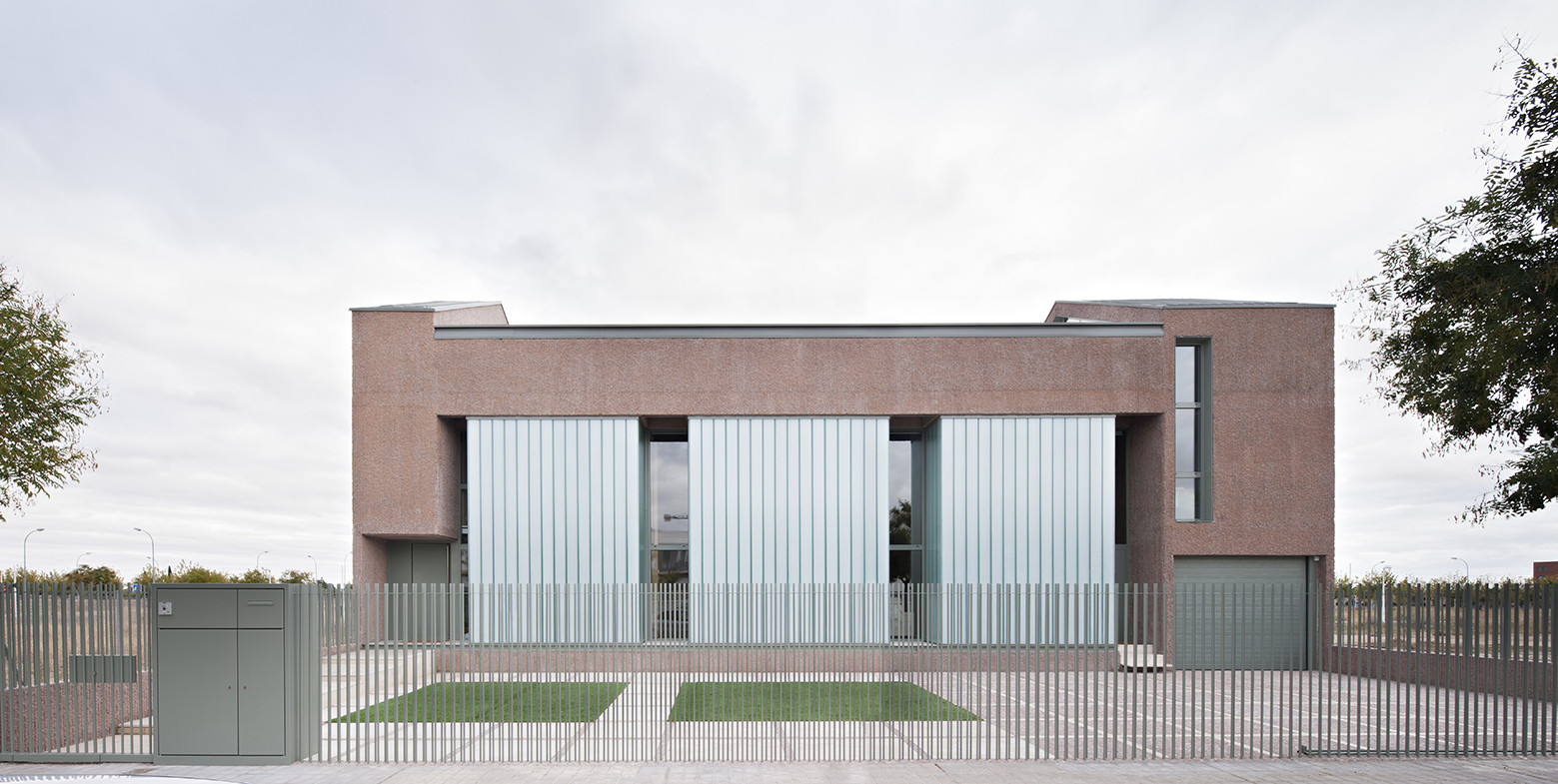 Text description provided by the architects. On an urban context, in the center of a row-house type block, we were commissioned to build a single house. The plot is located in the southern area of Ciudad Real, in the last growth ring of the city that has not been developed due to the economic crisis of recent years. Our proposal is the first one to emerge in this area from an urban void without any context. There are not surrounding houses, typological references or architectural legacy that could serve at some point as an architectural tool in the design of the house.

What does having aspect of a house mean? The complex program demanded by the client in their daily activities, coupled with strict urban conditions and layout of the plot, proposes a house that offers new experiences to the scale of architectural elements to users. Rhythm, structure, materiality and functionality meet on this project to offer a proposal that reveals distinct spatial sensations far from the ones that traditional state agents have developed recently. Due to the uncertainty of the formal volumetry of the adjoining plots, still unbuilt, and compulsory abutment on both ends for this row-house type, we decided to raise two volumes of 3.6 and 1.8 meters wide respectively at each end of the plot. These two volumes are presented as a result of applying the constraints of height, setbacks and roof to its maximum term.

The narrower volume locates the kitchen, a toilet and storage room in the basement while sauna is located on the upper level. The wider volume continues with the same intention of placing secondary areas of the house: garage, office, laundry and bathroom facilities. The gable roof is used only in these sides and, together with its marked volumetric composition, freeing up the space between these two volumes that may become similar in adjacent plots.

The central volume is solved from a more comprehensive understanding: from the urban scale. A series of compact volumes that take the full height of the building is hidden. The abstraction of the piece provides an unified and sequential compositional reading which provides the appearance of new volumes in the rest of the plots. The orientation of the facades solves its materiality from a formal dialogue. The line corresponding to the Cantábrico Avenue is oriented northwest, while the back sight to the southeast. The central volumes in both cases are exempt but formally unified by both the podium and roof. It seems to be a Greek temple. Bedrooms are arranged in the protected volumes of concrete, located in the back side and receiving natural light tangentially.

While the main glazed elevation provides volumes in the shadow from each other during the sunset. The quality of light in the latter enclosure makes the light hit against the glass monolith while graduating and regulating the amount of light inside. The housing offers a palette of colors and intensities that varies along the day and the volumes themselves screened and regulate the entry of light. The ocher broken concrete has a magnificent contrast with lights and shadows. The light vibrations on the walls show the illusion to users of waking them up, like a sunlight early in the morning. By late afternoon, the green hue floods light in the interior space from the opposite facade.

The central space is freed from any partition not only in the vertical plane, but also in height. A unique double height floor creates a void in which to live. Users develop most of their activities here. A hanging corridor crosses the living room and connects the two ends of the house. The circulation engages the user’s main activity while providing access to the bedrooms.

The glass boxes in the main, narrow façade (only 0.80 meters wide), also acquired the total height of the house. Since the condition of double skin serves as temperature gradation inside the house. A toilet, bar and the staircase that connects the master bedroom to the rest of the applications are located.

If natural light is conducted to the interior of the house in order to highlight the materiality of each element, artificial lighting has the same role. It highlights a series of cracks in the concrete, as seamless, continuous strips where low-consumption lighting LED are located.