In their latest book Design for a Living Planet: Settlement, Science, and the Human Future, Michael Mehaffy and Nikos Salingaros examine recent developments in science that will inform and possibly even radically alter the future of architecture. The following is an adapted series of excerpts that summarizes the content of the book.

Architecture has always concerned itself with the future, and with the implications of findings from the sciences — as well as their practical applications to architectural craft. Today we do indeed see very exotic computer-designed aesthetic surfaces, splined forms, and generative schemes. To a non-scientist, this work might appear ultra-scientific and “modern”. We also see the symbolism of a turbulent, fractured Universe, wherein old ideas of meaning are facing anguishing post-modern challenges.

But from a modern physicist’s perspective, this architecture is still mired in the past.

That’s because the “modernity” that architecture embraces in its core theory of form-making is almost a century old now — an outmoded relic of a naïve industrial past. Of course, many of the decorative skins of “modern” architecture are made from cutting-edge technology. But they are still essentially novelty gimmicks used to prop up old industrial approaches to settlement. Architects have allowed themselves to become attention-getting artistic packagers, using the allure of fine art culture to help sell a generation of failing, sprawling settlement across the globe. For all our aspirations of sustainability, we are in fact in an unconscionable conspiracy with disaster.

The problem is that we have not addressed the real process of settlement, or asked how architecture, as a craft and a discipline, can actually take (or resume) a leadership position in shaping that process. This implies a move beyond artistic metaphor, served up for the exploitation of others, to actual practice of a science of settlement, informed by scientific findings. These sciences must include economics, political science, environmental psychology, medical science, and the insights from biology, mathematics, and physics about the dynamics of growth and form.

The analogy to medical science is especially apt. This application of settlement science must be implemented with art and craft, just as the science of medicine must be applied by medical practitioners with art and craft. Like the profession of medicine, it must be rooted in evidence-based methods, and it must have as its foundation a professional standard of care for the wellbeing of others.

But this implies a deep re-evaluation, and a reform of failing professional models. It implies a real revolution, in methodology, in technology, in conceptions of “modernity” — and ultimately, in the very idea of design.

What are these insights from the sciences? We (a physicist-mathematician and an urban philosopher) summarize ten of them, which are discussed in more detail, along with others, in the new book Design for a Living Planet.

1. Complex Adaptive Systems
A key lesson for designers of all kinds is that product design can’t really be separated from environmental design. We are all, in some sense, environmental designers, working in the human environment. Since every system is only partially closed, we have to find ways to work on these systems as open systems — that is, as parts of larger, optimizing wholes. Routine failure to do so has led to our ecological misfortunes.

2. Self-organization
Any design that seeks to impose a “standard”, “formal”, pre-conceived, or self-referential architectural or urban typology is fundamentally flawed, because it has not computed an adaptive configuration starting from the local conditions. Much of post World-War II urban planning has to be rejected on the basis of this result!

3. The Network City
We can think of built urban structure and infrastructure as a city’s “hardware” — a matrix that can be changed only after considerable time and expense. The “software” is what can move around, connect, exchange information, etc. In a nutshell, as long as we have access to unlimited resources of energy and supporting resources, we can make a city with poor “hardware” run by pushing the network connectivity burden onto the “software”. But, as computer designers know only too well, using poorly-designed hardware with increasingly complex software is asking for trouble — it is only a matter of time before the system becomes unmanageable.

4. The Geometry of Resilience
Differentiation produces familiar geometries, such as local symmetry: for example, our bodies have two hands and two legs. The ability to perceive this kind of symmetry (along with other related kinds) is a very important aspect of our evolutionary psychology, and an environmental attribute that promotes human wellbeing. The presence of symmetry generated through differentiation also appears to be essential to structural resilience; without it, the result is lifeless rigidity. Differentiation introduces contrast, and symmetries introduce groupings, while counteracting uniformity.

5. Agile Design
The complex pattern of bird flocks, to take just one example, is not created out of a kind of rigid blueprint, specifying the complex shape at any given instant. That would be an overwhelmingly vast set of instructions. Rather, each bird has only a few simple rules for maintaining its position relative to its leader and neighbors. From the interaction of these simple instructions, the beautiful complex geometric patterns of the flock are generated.

6. Scaling and Fractals
These repetitive perforations at smaller scales — the fractal loading that results from the characteristic “generative algorithm” of fractal structure — will often continue on down to the scales of detail and ornament. Why is this? It seems likely that we, the users, making our way through these places find such complex environments (complex in a very precisely ordered sense) easier to comprehend, more intelligible, more usefully organized, and more beautiful.

8. Biophilia
The implications are potentially earth-shattering: aesthetic design choices are not just a matter of the designer’s artistic expression, for users to enjoy or not enjoy — together with other factors, they can improve, or damage, the health of users.

9. Computational Irreducibility
In the very simplest, computationally reducible systems (like simple math problems) we don’t need iterated computational effort, but can shortcut to the final state — i.e., use a formula. But an adaptive design process is computationally irreducible, and we are fooling ourselves if we think that we can impose a template, or somehow reach a final configuration through a formula or shortcut. This is the “reducibility fallacy”, into which most architects and urbanists of the 20th- and so far in the 21st-centuries have fallen into, with the consequence that their designs are non-adaptive and ultimately dysfunctional.

10. The Evolution of Patterns
Our mechanically-minded industrial age is obsessed with novelty, because it offers the power of marketing. New! Improved! A corollary is the idea that what is old must be discarded, rejected as “inauthentic” or “not modern.” But the sciences show us a very different Universe: one filled with recurrence, evolution, and patterns that endure for many millions of years, or are regenerated through genetic processes. This is how evolution adapts and succeeds over eons. It is a lesson that human architecture will have to learn, or re-learn — with far-reaching implications.

On first reading, these ten findings may seem too abstract to be of much practical help to architecture. But each of them carries a very concrete set of implications for how architecture is conceived — and a revolution away from today’s mode of practice, which creates novelty art-costumes over failing old industrial modes of settlement.

Perhaps the most useful concrete example is offered by the architect Christopher Alexander — a well-known and brilliant theorist. What is less well known is that Alexander and his colleagues have built some 300 buildings around the world. His ideas have also formed the critical basis of wiki and Wikipedia, the software behind many games, and the operating systems of the Mac, iPhone and other technologies.

Alexander’s primary concern is with “morphogenesis”, the growth of form over time, in nature and in human architecture. We’ve all heard about morphogenesis in biology — the way that organisms grow and transform into endlessly beautiful and varied shapes. Scientists are beginning to tease out the workings of this process. It doesn’t proceed from scratch, but from the transformation of patterns of previous configurations. The patterns exist within the DNA, and within the protein structures that form cells. They adapt to the environment and to each other as they transform their shape — a process known as “adaptive morphogenesis”. Alexander has been focused on the useful translation of these lessons to architecture.

Alexander is perhaps best known for his work with patterns and “pattern languages”. Patterns are a tool for a very important concept known as “evidence-based design” — design that is well-adapted to solve human problems, and to meet human needs. The design is not the product of a linear mechanical process, but emerges from a process of mutual co-adaptation, proceeding in evolutionary cycles, with the information on successes transmitted in a DNA-like message. Indeed, natural systems do work just this way to solve problems and achieve sustainability: specifically, they retain and evolve information about adaptive form.

Alexander recognized that, as the great polymath Herbert Simon pointed out, design is a kind of transformation, “from existing conditions to preferred ones”. Adaptive design cannot start from a supposed tabula rasa condition, but will always transform what already exists. Even similar design problems, in different contexts, have the task of transforming distinct configurations. In mathematical terms, every design problem has distinct initial conditions that strongly influence the solution.

According to the “universal rule for the distribution of sizes” (formulated by one of us and the physicist Bruce J. West, following Alexander’s insights) the smaller the elements in a complex system, the more of them there are. This relationship between size and multiplicity is governed by the fractal or inverse-power scaling law, which is obeyed by the majority of stable natural and artificial systems. These include the neural systems of animals, the circulatory systems in plants, the mammalian lung, electrical power grids, the World Wide Web, and countless other complex networks. Look at a fern leaf, a cauliflower, and a magnified snowflake to see this distribution of sizes graphically.

These insights serve as a kind of map to the architecture of the future — a future in which human technologies increasingly take on the attributes of complex natural systems. Most especially, these human technologies must acquire the ability of natural systems to adapt, and to preserve their own basis for life. Without such a profound transformation in technology, architecture can only continue to make exotic novelty deckchairs on a sinking Titanic.

Michael Mehaffy is an urbanist and design theorist, and a periodic visiting professor or adjunct in five graduate universities in four countries and three disciplines (architecture, urban planning and philosophy). He has been a close associate of the architect and software pioneer Christopher Alexander, and a Research Associate with the Center for Environmental Structure, Alexander’s research center founded in 1967. He is currently executive director of Portland, Oregon based Sustasis Foundation, and editor of Sustasis Press.

Nikos A. Salingaros is a mathematician and polymath known for his work on urban theory, architectural theory, complexity theory, and design philosophy. He has been a close collaborator of the architect and computer software pioneer Christopher Alexander. He is Professor of Mathematics at the University of Texas at San Antonio and has been on the Architecture faculties of universities in Italy, Mexico, and The Netherlands. 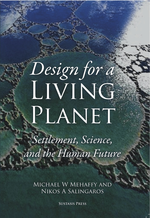 Design for a Living Planet: Settlement, Science, and the Human Future
Buy at Levellers Press An International Edition will also be available soon from Vajra Books

Ten New Findings From the Sciences that Will Revolutionize Architecture
Buy from
amazon.com

Chapter 2 of Design for a Living Planet is published in its entirety on ArchDaily here.