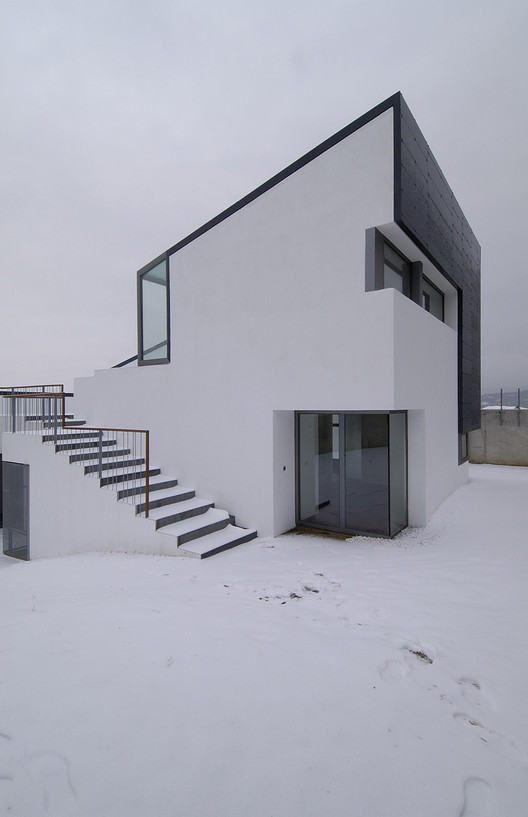 Text description provided by the architects. The Project consists of a single family house located on a modest parcel with a strong slope and exceptional views of the mountains of the Sierra outside Madrid.

The house evolves from the slope of the terrain and positions itself on the lot carefully providing exterior spaces (or garden terraces si queries) between the built volume and the perimeter of the site.

By way of an exterior stair with a gentle pitch, the grounds are connected to a generous rooftop terrace. This space endows the house with magnificent views as well as providing a complementary exterior space for the interior rooms, allowing one to move freely from interior to exterior whether in the kitchen, the living room, enjoying the sun, etc. As a result, there is a natural continuity between domestic activity and the site itself, emphasizing the understanding of the house as a true extension of the parcel, in its spaces and uses.

The built volumen increases gradually from the first encounter. The height at the access street is a single level, rising to two levels at the upper edge, due to the presence of the studio above the main bedroom. In this way, the house is integrated naturally with the strongly sloping terrain, while producing an entry at a more intimate scale. It also creates a rich ambiguity of perception from different points of view.

The finish building materials, white stucco walls and a black slate tile roof, are those traditionally used in the Sierra around Madrid. The slate is used in slabs as a curtain wall construction both on the roofs as well as on the walls visibly exposed to the exterior, as if it were a protective shell. The private interior patios are clad in the white stucco.

The solid construction of the house consists of reinforced concrete slabs with steel columns that are enclosed at the perimeter in a multilayered 35 cm ceramic wall which absorbs the structure, insulation and mechanical elements within a large cavity. The black slate slabs are supported on an aluminum substructure adding efficient and valuable ventilation.

To maximize the physical and visual connections between interior and exterior spaces, the house is conceived with a number of entrances and exits, creating a permeability which makes the most of the site.