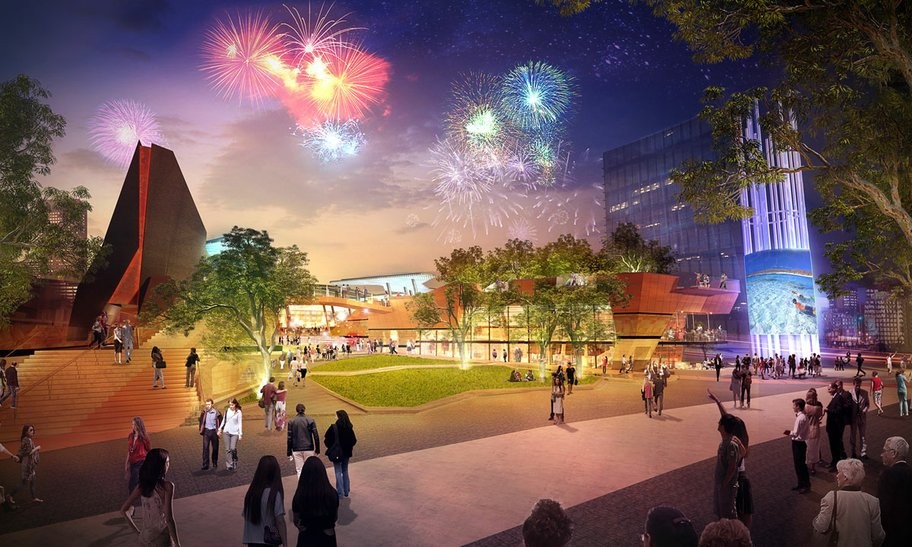 Accommodating up to 8500 people, the square will be the city’s first major outdoor space for nighttime gatherings, and is described by Western Australian Premier Colin Barnett as a means of connecting visitors to the state’s history. Sited at a major transit interchange and creating five new North-South corridors through Perth's CBD, the sprawling development will cost an estimated AUD$73 million.

Recent years have seen an increase in reconciliation efforts between Indigenous and non-Indigenous Australians, and recognition of the need to reflect the Indigenous narrative within mainstream Australian history. Incorporating thematic and visual elements of Noongar culture and lore, the vision for the new square relies heavily on Indigenous storytelling and representational methods, stitching together two discrete histories. Multimedia installations, public art, native landscaping, and Noongar folklore and track imagery are united beneath a meandering canopy, retelling a history as colourful and bold as the development itself.

Part of the Perth City Link Project masterplan, Yagan Square will reconnect parts of the CBD that have been divided by a rail corridor for over a century, and feature works and contributions by Indigenous and non-Indigenous creatives alike. Yagan Square will celebrate diversity and community, housing an amphitheater, marketplace, play area, event space, and other civic attractions.

Story via the Metropolitan Redevelopment Authority of Perth, ArchitectureAU.